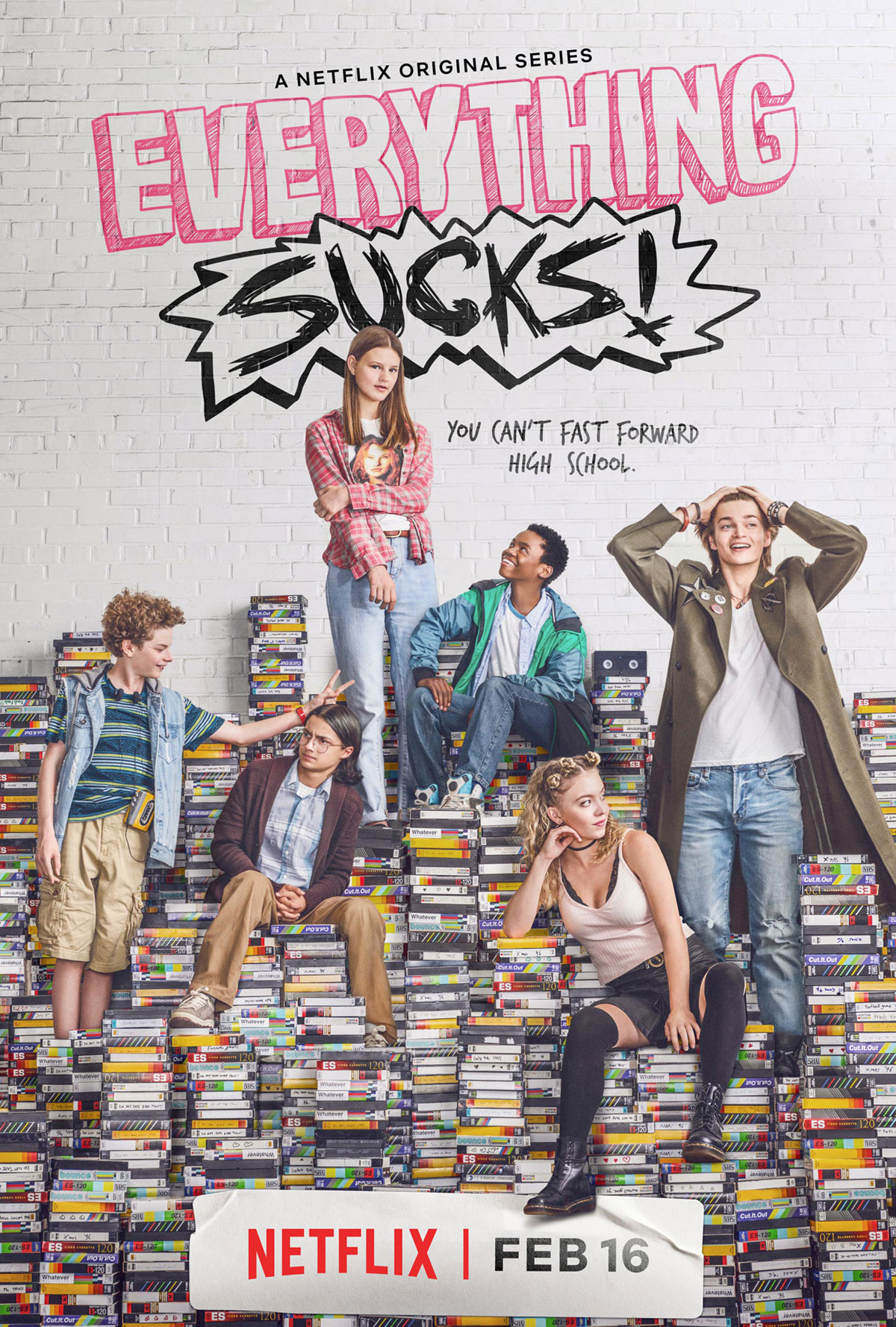 I’m probably entirely too old to be watching this show, but here I find myself. Granted, it’s relatively unclear who this show is for. Hipster Jr, who is a young teenager, could probably watch this show and come out of it with a few questions, but hopefully no long-term scarring. A twenty-something might miss some of the inside jokes from the 90s, but they could take away the main themes. Granted, folks loved Stranger Things — a show in which the characters were pretty much exactly my age at that time — but the 80s had a kitsch and an almost surreal quality that probably make it seem like another universe to our millennial friends. Whereas the 90s — this show taking place in 1996 — are just familiar enough that it won’t disorient the young ones, but might make them shrug at the luddite ordinariness of it all.

So what is this thing? It’s essentially Freaks and Geeks for a younger generation. Granted, it’s not as well written or funny, but they definitely go for the whole period-piece, coming-together/coming-of-age school dramedy. This show certainly had more of a pop sensibility as well, melding the more cinematic sense of a Stranger Things with the traditional relationship school drama of Dawson’s Creek and a sitcom like one of Apatow’s other shows, the short-lived college comedy, Undeclared. The setup will feel super-familiar. Three dorky friends start their freshman year at Boring High School (in Boring, OR). Yes, not subtle. They are A/V kids, the trope that seems to permeate every single instance of dorky freshman the world ’round. The first day of school, one of our dorky friends, Luke, has an instant crush on one of his sophomore A/V comrades, Kate. And, lo and behold, she turns out to be the principal’s daughter. No way, that sucks! And then we are introduced to the foils, the drama club kids. A/V versus Drama: the classic showdown. The majority of the show is then spent watching Luke pursue Kate while avoiding being crushed by the drama kids. All the while Luke’s two sidekicks, McQuaid and Tyler, play things for laughs and are the Greek chorus to Luke’s pursuit. Teenage drama ensues as love triangles form among both the kids and some of the adults in their lives. The funny thing is that the pursuit of the teenage relationships feel a little forced and overcomplicated just because, but the one real adult relationship that’s pursued in the show is actually quite sweet and effective.

I was honestly afraid that the entire show would be a goof on the 90s and just be a string of 90s gags about grunge and early computing and extra-large cell phones, but after a few jokes, and the occasional reminder of what era we’re in, they settle into the narrative and leave the Tamagotchi references in the background. What does really stick out, though, is the acting. Once again, they’ve found really decent kids. The real standout is Jahi Di’Allo Winston, who plays the lead, Luke. The kid is just amazingly charismatic, shows an incredible range of emotion and just jumps right off the screen. Mark my words: he will be a star. The woman who plays his mother, Claudine Mboligikpelani Nako, is also just captivating. She feels super-real as Sherry and is asked to play a pretty sweeping array of emotional notes. A perfect match for her is principal and eventual love interest, Patch Darragh. Portraying a sad sack in pleated khakis whose life is reinvigorated by Sherry, he plays things perfect as a father who only wants the best for his daughter and for his school, but has a reluctant yearning to finally do something for himself. The two of them are terrific, and are honestly more interesting than any of the kid characters on the show.

All of this eventually brings the A/V kids and the Drama kids together — because of course it does. And what do they need to do? Well, make a movie, of course. To save Miracles! Ok, not quite to save Miracles (a la Breakin’ 2), but to nominally save the school and hold off the ire of the oddly aggressive drama kids. Because usually that’s the football players, duh. Is this show going to win any awards for originality? Not at all. Is it easily digestible and propellant in a way makes you want the streaming to just keep on rolling? It sure is. I mean it’s no Saved By the Bell, Degrassi High or Head of the Class, but what is? Am I right?