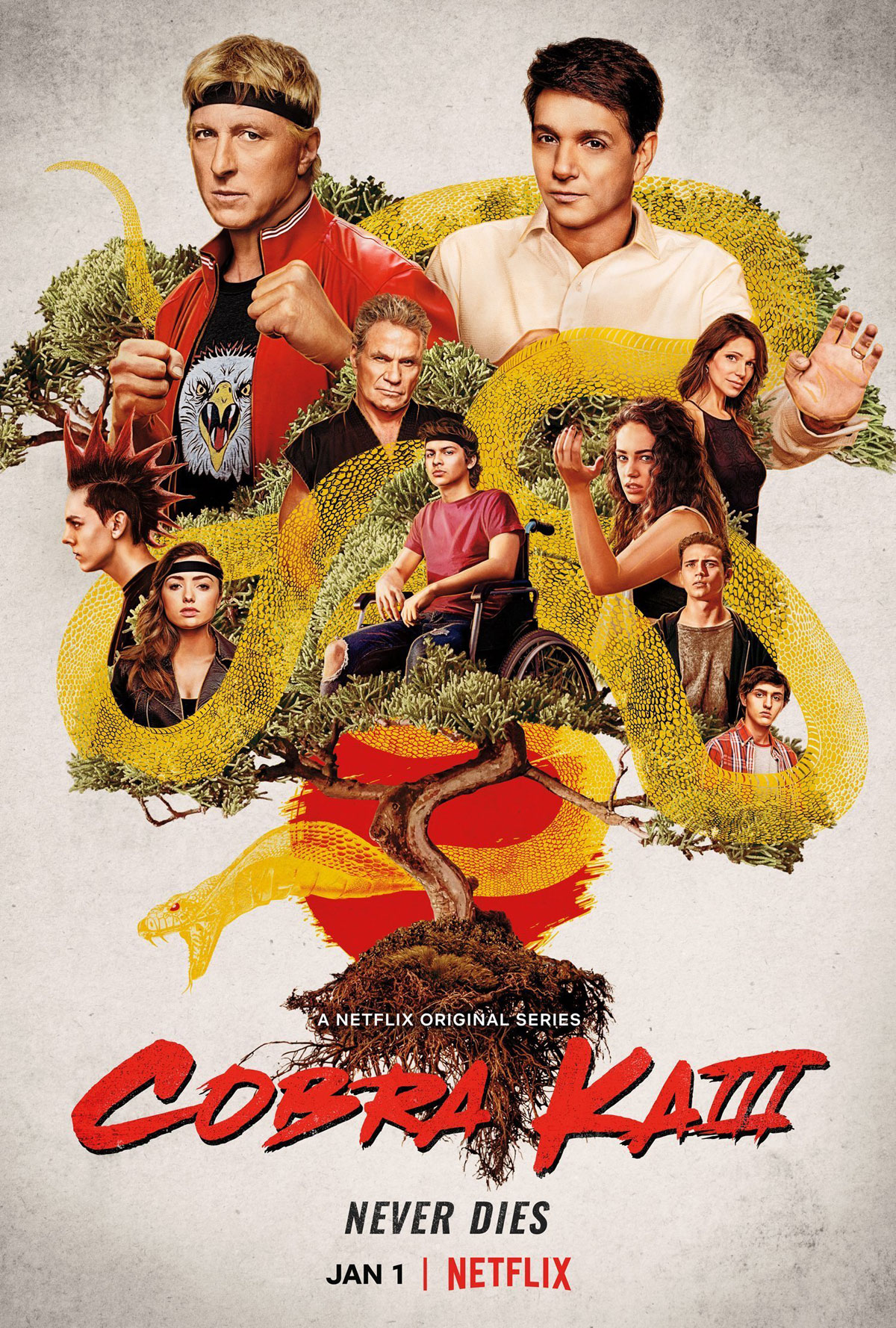 Nostalgia can only take you so far. At some point you need to hoe your own row. Is that a saying? I don’t know, but basically my point is that at some juncture you must separate yourself from the goodwill of people’s love of the past and your connection to it and spin a new yarn. Again, I’ve clearly been hitting the oldey-timey phrase button. But we got two seasons of Daniel vs. Johnny, clips from The Karate Kid, and even the the return of Kreese. The show trades on Gen X nostalgia in a similar, but different, way than something like Stranger Things did. Because it’s not necessarily the nostalgia for a time period or decade, but for a very specific piece of media that was critical path stuff for us dudes of a certain age. But… there are the smiles and the good feelings of diving back in with our old karate friends, and there is riding that horse until it fucking dies in its tracks. And then beating it over and over hoping it’ll rise and carry you the rest of the way. Which is a what that phrase means (just so’s you know).

So where to go with season three of Cobra Kai? Does it blaze a new trail, or go its own way? Well, funny thing about existing IP: sometimes there are less successful sequels to the original that create even more narrative to draw from. So the Cobra Kai people double down and use Karate Kid Part II stuff. A seemingly desperate move, and a bit of a cynical one if I were to put my creative hat on. I mean, who the hell cares about that movie? Who even remembers anything about it other than that stupid little hand drum he uses? Nobody. Do you remember Another 48 Hours? Yeah, me neither. The point here is that they’re really emptying the goodwill tank here. They’re pushing it by sending Daniel off to Okinawa to see his flame from Part II. And his old Part II nemesis. Neither of whom we remember nor care about. But hell if they don’t try to remind us with clips from that pale sequel. Thanks, dudes, but no.

Otherwise, the show itself is literally just the exact same show as season two, where the rival gangs of kids fight in the school hallways. And in malls. And in Daniel’s house. Fights that end up smashing all of his furniture and windows, which miraculously doesn’t end in arrests, huge insurance claims or even a grounding of his daughter who exacerbated the situation. It’s silly. And repetitive. And that kid with the mohawk freaks me out and I hate him and his character. And we get to see Johnny’s son in juvenile detention, which is unrealistic and kind of stupid. And Miguel’s rehab directed by Johnny that is also unrealistic and silly. So, not compelling and not interesting.

But, hell, why not delve into the backstory of Kreese while we’re at it? Don’t you care why he’s so mean? Like what happened in this dude’s life to make his motto “Strike First, Strike Hard, No Mercy!” such a calling card? Well, apparently he was in this nonsensical little gang of elite soldiers in Vietnam who were captured, put in a bamboo cage (on an obvious sound stage) and forced to fight each other over a pit of… cobras! Well, dang if this backstory isn’t the most obvious and direct line to his current state. Amazing! It’s hard to know if they’re being intentionally cheesy here, or intentionally obvious. Like a b-movie kind of vibe.

The thing is, the show can’t quite decide if it wants to be goofy or serious. Not like Leftovers serious, but like not stupid serious. To rise above being above being a vehicle for peoples’ occasional smiles. Their courtesy smiles. To aspire to be its own thing. To live on its own merits, apart from that link to the past. And, honestly, I don’t know if the creators want or need that. They may be perfectly content pushing out season after season of badly choreographed punching and kicking scenes. And perhaps next year they’ll fold in elements from The Karate Kid Part III. And The Next Karate Kid in season five. Shit, what has Hilary Swank been up to lately? Maybe Daniel, Johnny and Kreese can join forces against her when she opens her dojo and cleaves off a class of dorky high schoolers to terrorize the Miyagi-Do/Cobra Kai/Eagle Fang super karate school and garden center. That one you get for free. Use it at your own peril.