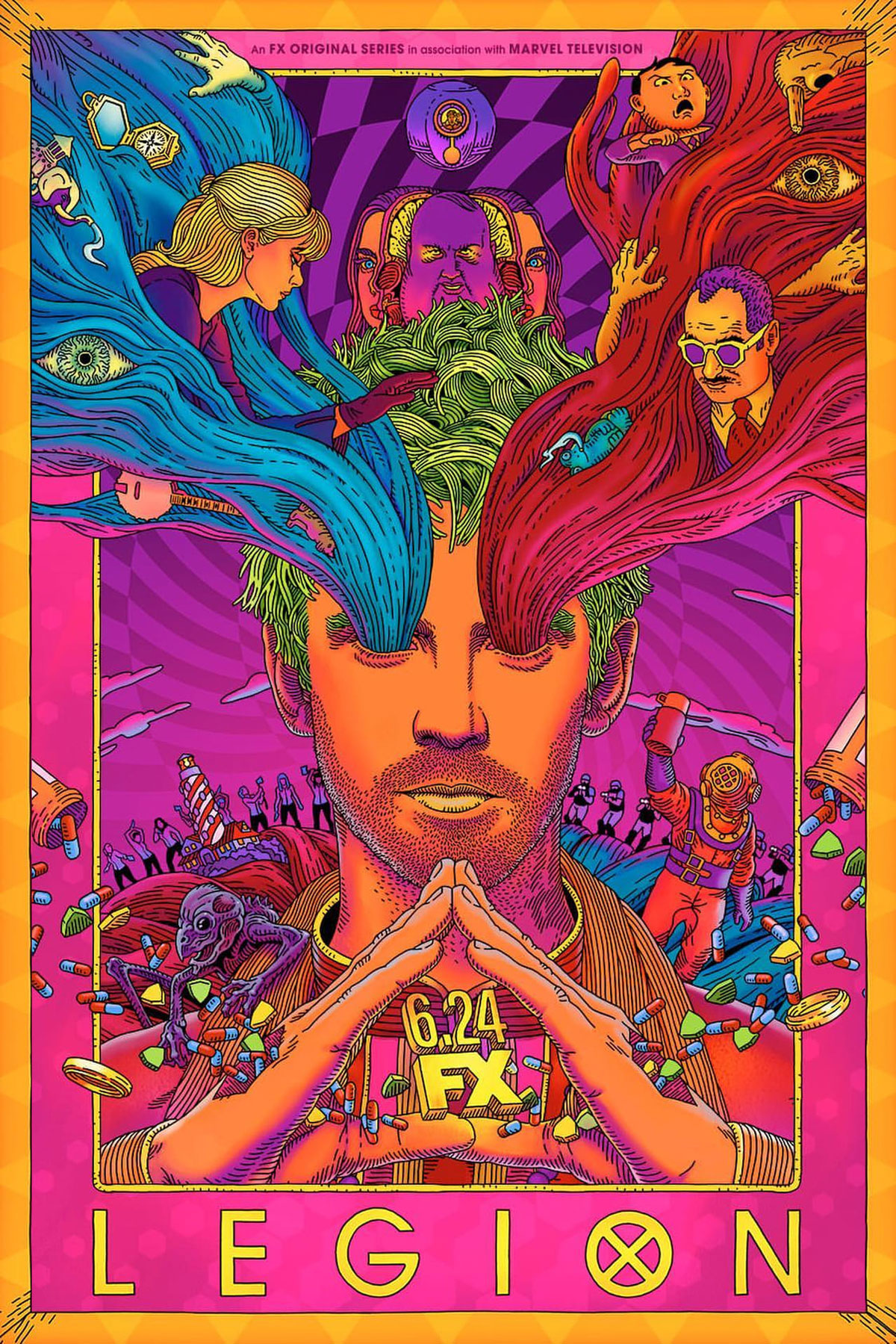 There has truly never been a TV series like Legion. A giant mind-fuck, acid trip of a show that seems to create the rules on a minute-by-minute basis. Completely unknowable, unpredictable and bizarre. To even dare to connect it with the rest of the Marvel universe is folly. This ain’t no Captain America. Hell, this isn’t even in the same multiverse. Though this season definitely investigates it.

To even attempt to explain what happens in this show is next to impossible. Suffice it to say, some serious nonsense goes on. Season three finds David Haller/Legion (Dan Stevens) apparently leading some sort of sex cult or something. I don’t even really get what’s going on, but it seems like one of those 60s things where a colorful leader preaches love and happiness to a bunch of drugged out hippies. Most of whom are beautiful, young women.

Meanwhile the bad guys are flying around in a giant zeppelin piloted by a couple Robert Palmer model robots with mustaches. And the devil is doing something else somewhere else. Now, for all the weirdo stuff that’s happened in this show, I think the one thing that was missing was time travel. So what do the writers do for the final season? Time travel, of course! Because it makes sense for a dangerous, schizophrenic mutant like David to be able to travel back and forth in time. Especially when it’s speculated throughout the series that he’s going to cause the end of the world.

The thing with the show is that the timeframe never made any sense anyway. David seems to live in present day. But sometimes it seems like it’s the 60s. And his childhood is seemingly in the 1930s or 40s despite him being in his early thirties. And perhaps the whole thing takes place in some alternate universe and that’s why everything is a giant trip and time seems to be fluid and anachronistic. And you know this show is just gonna go absolutely crazy with it. So they do.

Now, we know this is going to be the final season of a three-season show. So they need to come to some kind of conclusion. And time travel allows for all sorts of things that we haven’t gotten in past seasons, including a deep dive into David’s mysterious past. First, he is the son of Charles “Professor X” Xavier. He’s that bald dude in the wheelchair that we’ve all seen portrayed by James McAvoy as a young man and Patrick Stewart as an older dude in the X-Men movies. Harry Lloyd plays the young version on this here show. David’s mom is the very recognizable Danish actress, Stephanie Corneliussen, from Mr. Robot. Turns out that an absent mutant dad and a schizophrenic mom makes for a schizophrenic mutant son in David. Let the time fun begin!

So David makes a plan to fix the world. Which apparently starts by killing everyone he knows. But, of course, we get the whole thing about fate and multiple timelines and variables and all that. So using this time traveler mutant (Lauren Tsai) to go back in time to try to fix his parents to help fix him isn’t as easy at it would seem. Because — and this is a trip — there are these things called Time Eaters that are let in by their constant time jumping. And they’re bad. They collapse time and fuck everything up. But, in them everyone has a common enemy. So get ready for a good guy, bad guy team up to save the universe! I think.

But what really happens is all sorts of lunacy. Tsai is constantly losing teeth, Bill Irwin suffers a head injury by proxy, the devil is caught in a a sepia-hued California footpath and Jemaine Clement plays house with Jean Smart in a purgatory shire. And then… And then, for no apparent reason, Dan Stevens and Corneliussen break out in a full orchestral rendition of Pink Floyd’s “Mother.” Because, again, this whole show is just one giant drug trip. A really, really cool looking drug trip.

So if you’re tuning in expecting coherence, you may be in for a whole bongload of disappointment. But if you want absolutely amazing visuals and some things to occupy your reeling brain for an hour at a time, this is your season of television. Oddly, these eight episodes actually made more sense to me than episodes past. Maybe it’s because I just came out of watching another time and multiverse-bending show, Devs. Or maybe it’s because there was actually a goal here to work toward an ending. An ending that, after all the craziness, was actually pretty clear and, dare I say, sweet.