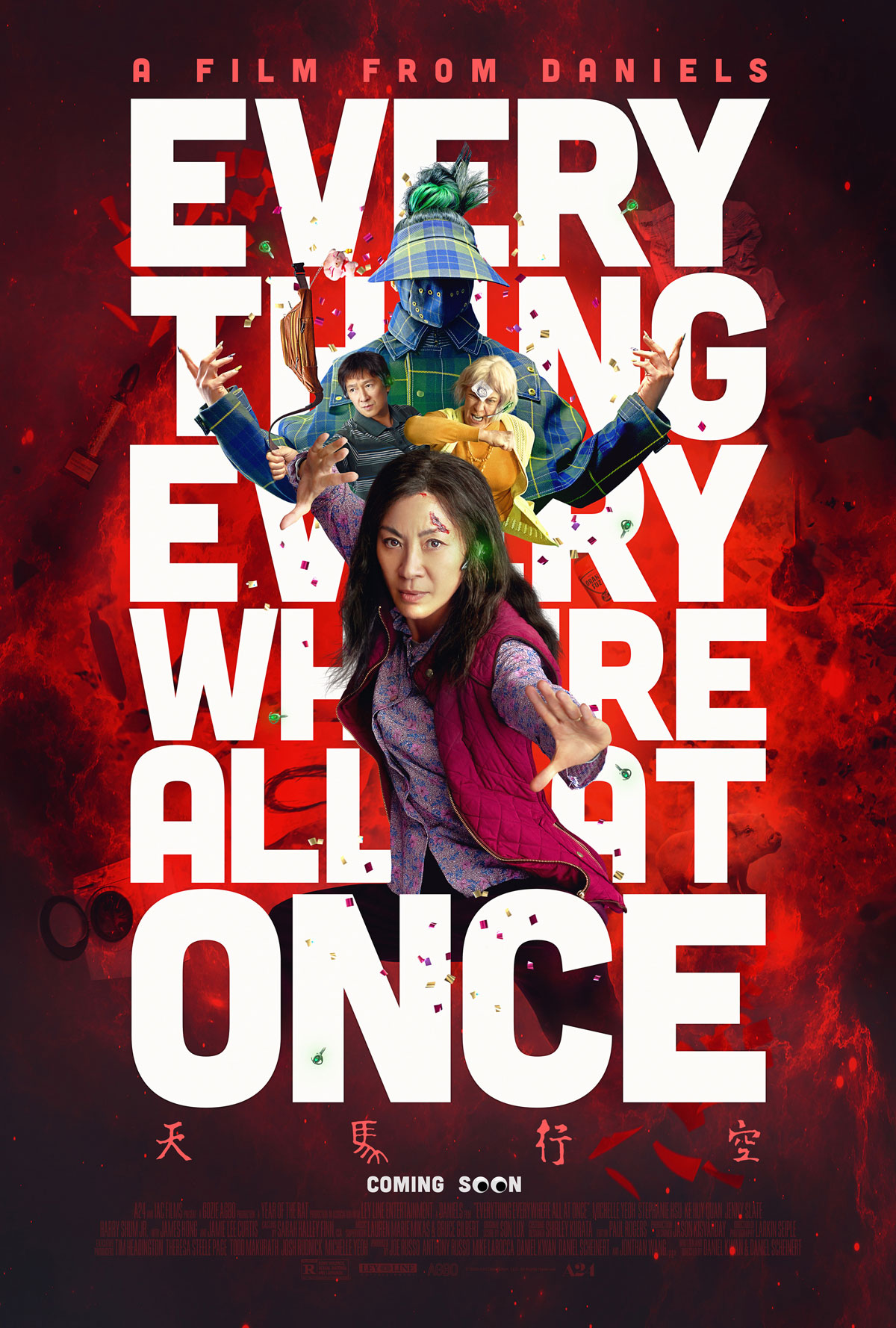 Everything Everywhere All at Once

I see so few movies in the theater these days. That aren’t Marvel movies, that is. So I relished the opportunity to see Everything Everywhere All at Once on the big screen. Even if that big screen wasn’t so big. And the seats were kind of crooked. But, hey, there would be no bathroom breaks, no mobile phone interruptions. No children coming down the stairs asking for food. Though one of those children was with Ms. Hipster and me at the theater. I think she might have eaten some Twizzlers, but otherwise she was an astute and remarkably adult moviegoer. Even when a dude starting fighting our main character with a couple of bendy dildos.

How to explain Everything Everywhere All at Once? Well, it’s a multiverse thing. Which, as you know, is like all the rage these days. Brought into the mainstream consciousness by a slew of Marvel movies and television shows and aped by just about every sci-fi screenwriter on the planet earth. But none of those other multiverse movies star a sixty-year-old Chinese immigrant who owns a laundromat in a sad part of Ventura country with her estranged husband. Played respectively by the amazing Michelle Yeoh and Ke Huy Quan, former Indiana Jones sidekick, Short Round, and Goonies gadget guru, Data. The dude hasn’t acted in twenty years and chose this movie to make his re-introduction to Hollywood. Good move, my man. Anyhow, they’re a struggling couple with a young adult daughter, Joy (Stephanie Hsu), who is at odds with her mother over their relationship, as well as her mom’s attitude toward Joy’s same-sex relationship with her girlfriend. The laundry isn’t doing well financially, and the family is being audited by the IRS. Basically it’s a family tale of a fraying family unit and economic and aspirational struggle.

Which, I know, doesn’t sound funny at all. But, rest assured, the movie is funny. It’s absurd-funny in a very, very Michel Gondry kind of way. How can it not be when you have the stodgy IRS agent played by a bedraggled Jamie Lee Curtis, who at one juncture enjoys a more-than-plutonic relationship with Michelle Yeoh in a universe where all humans literally have hot dog fingers. Through the lens of the different universes into which Yeoh’s character, Evelyn, travels, we get themes of nihilism, empathy, wish fulfillment, reconciliation and on and on Frankly, I’m not smart enough to understand exactly what the phases of the Everything Everywhere All at Once multiverse was supposed to be exploring. But I also didn’t understand everything behind the mind-bending unreality of The Science of Sleep, or even Eternal Sunshine for that matter. Or the internal mechanics of my favorite show of 2022 so far, Severence. The point is, I can enjoy a film like this for its surreal and outlandish creativity and thought-provoking themes like the two Gondry films, and also appreciate the beautiful world mechanics and deeper interpersonal connections like Stiller’s awesome show without totally getting each and every strand of thematic connective tissue.

That all said, the narrative here isn’t complex. This ain’t Tenet. In fact, I’m sure some nerds out there probably find the multiverse mechanics flawed and scientifically silly. But this film isn’t about that. It’s a comedy, after all. Apparently originally written for Jackie Chan. And god knows Jackie Chan movies are rarely interested in the hard science of physics, or any other study. I’m super-happy, though, that whatever fell through with him fell through. Because the cast is terrific, and the story benefits from being a mother/daughter tale rather than whatever father/daughter thing it would have been with Chan in the lead. The immigrant tale. The tale of a conservative mother coming to terms with her daughter’s sexuality. The relationship between two immigrants who dreamed big dreams of America, only to end up running a failing laundry, up to their eyeballs in receipts and debt. It all sets up perfectly for this exploration of the possibility of a branching universe and other lives not lived. Which happen to include black holes in the form of giant bagels, excellent fight scenes (one including the aforementioned dildos) and just constant surprises and fun in a movie that is an incredible breath or fresh air. Which I know is a cliche, but one that I think, after years of pre-existing IP, is earned. I don’t see a ton of movies anymore, but this is by far the best thing I’ve seen in quite a long time. Original, fun, funny and very cool. What else could one ask for in a night out?