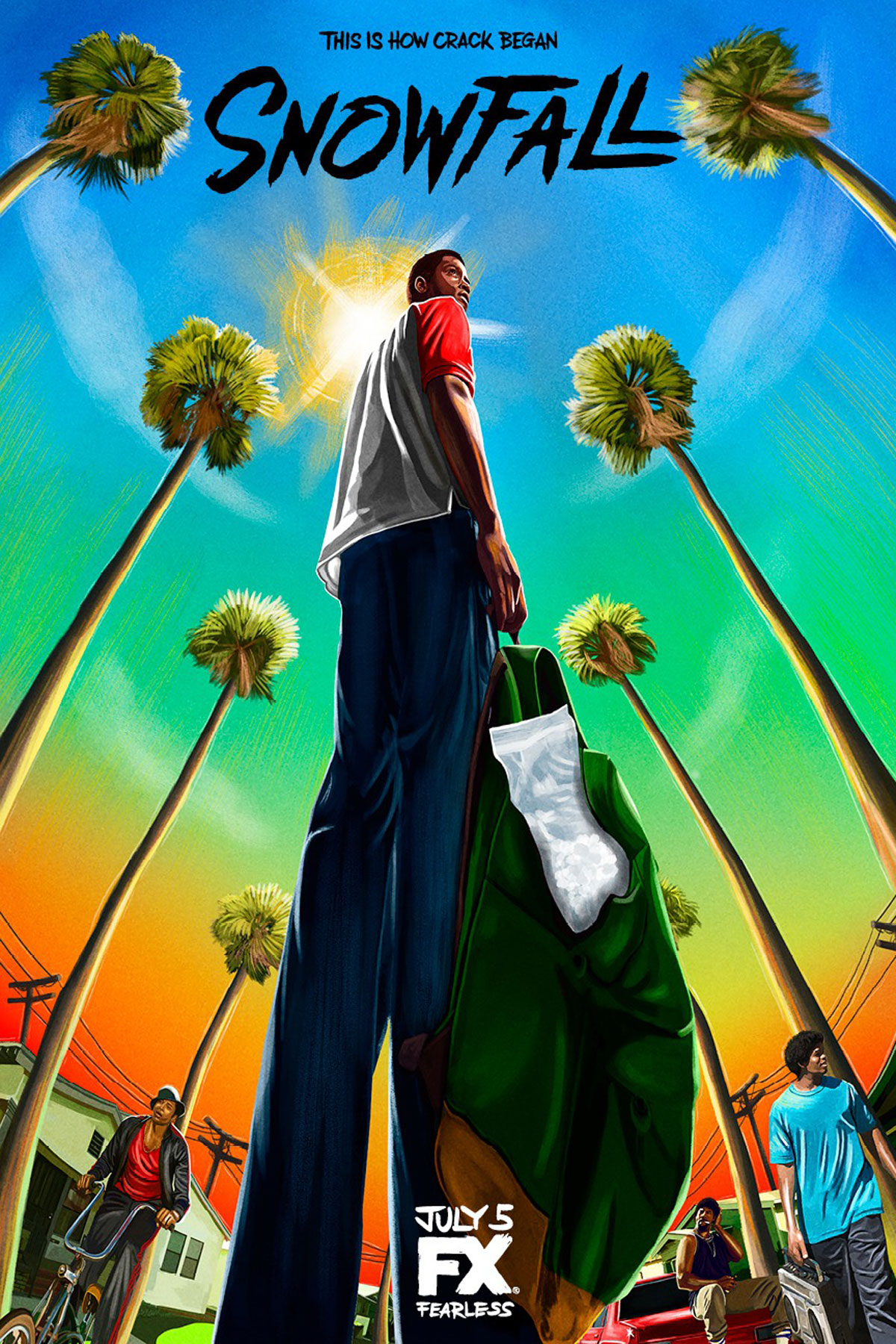 I came of age during the crack epidemic in Los Angeles. I had very little understanding of the socioeconomic and cultural impact the drug had on the residents, police, justice system, etc. So the tagline of this show, “It’s how crack began,” struck a certain curiosity chord with me. The promos were stylized and just a bit mysterious. They featured nothing more, really, than a guy walking down an otherwise idyllic-looking Street on a sunny day (LA streets can fool you like that), just strolling along to “Hard Times” by Run-D.M.C. Until one steps on what we all realize is — if you’re of a certain age — a crack vile. Just that visual and that one sound is enough to tell you what’s up. Masterful, that promo (see below).

The thing is, the show itself isn’t as focused and, artful and beautiful as the promo. They try the impossible by telling the tale through multiple points of view. The issue is — as it always is when you have several storylines that coexist — that not all of them can be compelling, and there is at least one that you dread coming back to. In this case, you have what I suppose is your main storyline, that of our young protagonist, a well educated, smart African American kid who seemingly just wants to make some money. And, honestly, this is the biggest miss about the show: why does this kid, Franklin Saint (a little on-the-nose), who seemingly has everything going for him, want to become a drug kingpin? It plays out not unlike Breaking Bad, and, in fact, our protagonists’s arc is very similar to Walter White’s, as he transforms from well-respected member of the community into a ruthless slinger of shit that is set to ruin his neighborhood. And for reasons, especially in this case, are even less clear than Walter’s. In addition to him, we follow the trials of a Mexican crime family and their offspring as they also become fledgling drug pushers, the CIA agent and his attempt to fund rebels in South America using the proceeds from even more cocaine, and then some other peripheral folks who come in and out of all of their lives. They could have easily cut out the Mexican family all together and we would have been fine. Every time the story swings to them, I honestly just wanted to hit fast forward. The FBI stuff is interesting, though. as our main character in that front, Teddy McDonald, is troubled and obviously disturbed that he’s not doing the right moral thing in selling coke to fund this rebel group. And the main protagonist, Franklin (Damson Idris), is just amazingly compelling. As a face, as an actor, everything. His character isn’t written particularly well, and his motivations are murky, but it’s hard not to pay attention whenever he’s on screen. Same goes for Carter Hudson, who plays Teddy. He looks like 20 other actors, but his tortured, ball-of-nerves thing he does is definitely hard to turn away from. They’re both terrific. Some of the other supporting cast is good as well, but the script kind of plays out like a b movie at times. One character, who is supposed to be an Israeli drug lord of some sort, is played so poorly that he alone almost ruins the show. His accent is all over the place (despite actually being Israeli) and the bordering-on-anti-semetic portrayal of his character reminds me of not-so-fondly of Al Pacino’s god-awful turn as a Puerto Rican in Carlito’s Way. The whole thing should have been left on the cutting room floor. It’s really terrible.

There is also a repetitive nature to the show, and it moves through its first season at a glacial pace as Franklin tries over and over to become a real-deal coke dealer. He carries his stash around in a flimsy JanSport backpack that he always has with him, but flings it around like a bored kid coming home from school, despite it often being filled with a couple keys, or tens of thousands of dollars. He buys stuff, he tries to sell. He buys more stuff, he tries to sell. Guys hone in on his business. Things go wrong. And then we swing over to the other two narratives and come back to him and he seems to not have done anything in the intervening time. It just plods along. Just keeping us from the crack while deals are made, people are shot and a multitude of weird side narratives spin off into nothingness, leaving you wondering when they’re just going to get to it.

I honestly roughed it out to the end, but there were times where it was slog. I mean, crack doesn’t even show up until the penultimate episode. And, based on this, it’s clear the show’s creators were playing the slow burn in order to really crank up the heat (pun intended) in season two. I felt like perhaps I was the only person watching the show, but apparently there were enough people to get a second season. The question is wether or not I really care enough about crack to tune in. Of course, they’ve given me that taste, and I can’t help but come back for more — regardless of how it affects my health.