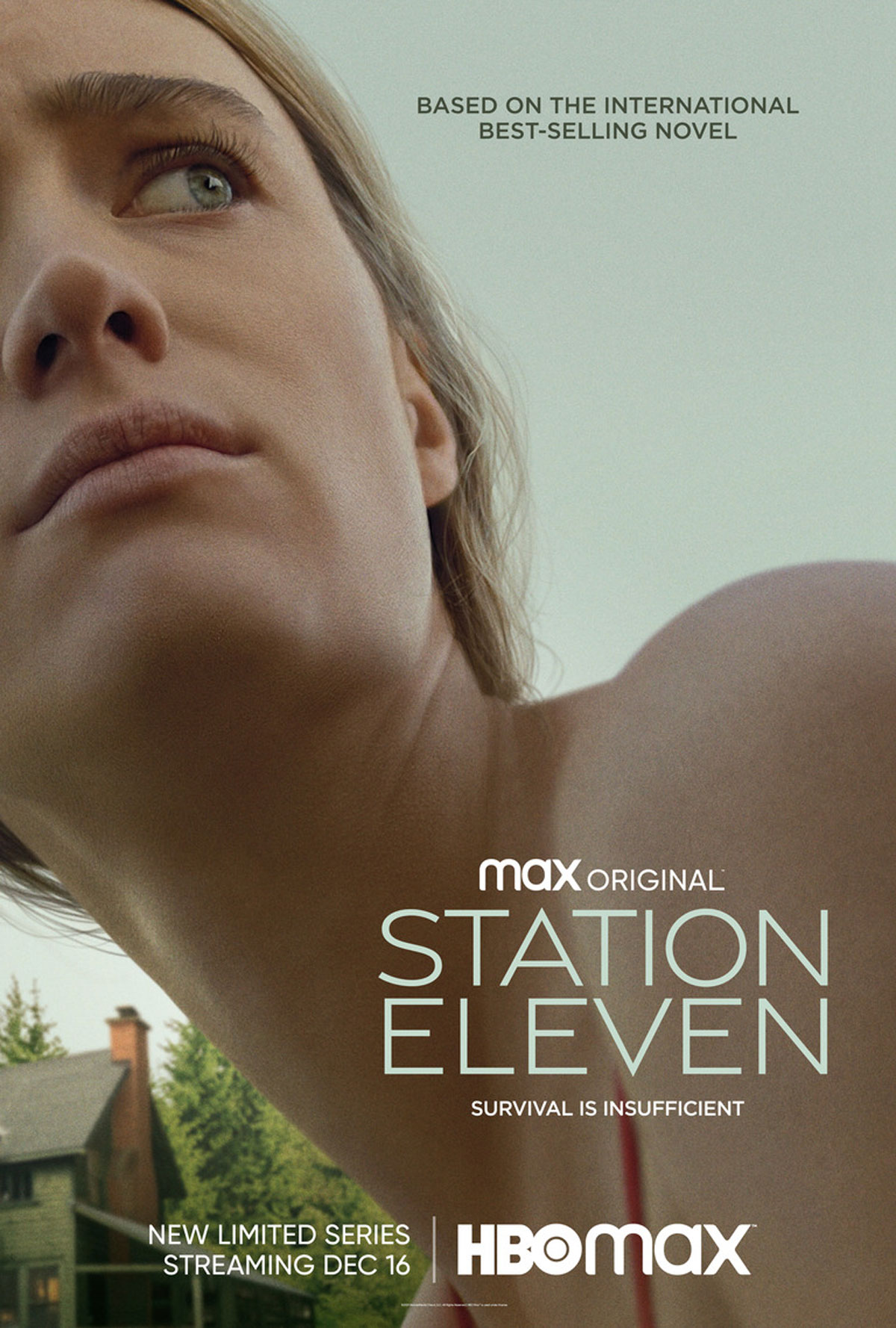 It’s a rare thing when a movie or TV show based on a novel actually improves upon the source material. Though the rise of the [hopefully] limited series has made it more and more likely these days. So, it’s with great pleasure that I say that Station Eleven the series is actually head and shoulders better than what I felt was a decent, but flawed, novel. Unsurprisingly titled Station Eleven. Now, we all realize we’re in the midst of a global pandemic. And if you’re sensitive to that sort of thing, this series about the aftermath of a global pandemic may or may not be triggering for you. The series creators spare us the spectacle of the actual death for the most part, because that’s not really the focus here. The flu seems to mostly kill its victims in their sleep, as they just kind of feel sick, close their eyes and die. Nice, I suppose.

So if the show isn’t about the spectacle of death and destruction of a worldwide plague, what is it about? I suppose it’s about the small stories between people. The little connections and how the way we treat others, especially those kindnesses, become things that people can carry with them throughout their lives. Especially when those lives are otherwise affected in a way that could easily break anyone if they thought about it. After all, it’s a tough hang when civilization collapses after like 99% of the world’s population quickly dies and all relationships and connections reset and start from scratch. So, what are those common things that tie us together? And now I’ve lost the string. But the point is, the series actually does a much better job thematically than the novel. With the core relationship in the show being between a child actor, Kirsten (Matilda Lawler / Mackenzie Davis) and a part-time blogger and totally-not-an-EMT, Jeevan (Himesh Patel). It’s almost impossible to believe that the relationship between these two strangers, who end up in the Chicago apartment of Jeevan’s brother, Frank (Nabhaan Rizwan), just as the killer swine flu sweeps across the globe is a completely new construct of the show’s writers. It’s so good, and so key, to the entirety of the narrative, it’s really hard to think of how they could excise even a minute of it and make a show of it.

I’m not really certain how to really describe the show itself without going into too much detail. But it does follow the book’s style of going back and forth in time. I know that’s become a pretty standard way of telling stories these days — especially post-apocalyptic ones — but, to my mind, the series does a pretty masterful job of it. The three major timelines are just before the apocalypse, just after the apocalypse and twenty years after the apocalypse. So rather than complicating and feeling the need to fill in the twenty years post-pandemic and what the heck happened and how everyone ended up where they were, we, the viewers, get to kind of fill in that piece based on the conversations and dialogue we’re given. None of which does that clumsy info-dump thing where the character just sits there and explains stuff in giant blocks of monologue. There’s speculation, of course, that if they ever do decide to do a season two (which I hope they don’t) that they’ll drop in in like year ten. Because, again, we don’t ever see that time. Which is cool.

The thing that the show really does well is managing the ties between time and space without confusing the hell out of you. That’s partially the writing, but it’s also the editing and the set and costume design. And everything, frankly. The item that I had an issue with in the book continues to be a lingering sore point for me in the series as well. And, unfortunately, it’s this comic book written by one of the characters, also titled Station Eleven. It’s this self-published comic book about the esoteric adventures of a lonely spaceman, Doctor Eleven, written by one of the secondary characters, Miranda (Danielle Deadwyler). The issue is that it’s so overly literary and kind of emo that I have trouble connecting the comic book and its obvious talisman-like existence to the characters it affects. It honestly seems a little overwrought and odd, so it’s tough to feel its power when different characters act out scenes from it, read it religiously and, in one case, essentially create a childrens’ cult/crusade around it. I just don’t get it. But I suppose it’s not essential to “get it,” as you can still understand what it does to bring the feelings of the Doctor Eleven character into the real world post-flu.

There is also a whole lot of Shakespeare. Now, I’ve read a few of his plays, but my familiarity and memory of those plays is pretty rudimentary at best. But it pervades the narrative. From one of the main instigating characters, Arthur Leandor (Gael García Bernal), dying on stage during a performance of King Lear on the night of the pandemic’s genesis, to the roving acting and music troop, The Traveling Symphony, doing their version of Hamlet to small post-apocalyptic audiences twenty years in. I don’t think one has to know Shakespeare’s work to understand what’s up, but I imagine some knowledge could deepen the experience. There’s also the whole aforementioned cult of children thing, The Undersea, that is based in some part on the story of the Station Eleven comic book. That part felt a little underbaked. It’s something that existed in the novel, but is completely different in the series. So it feels like they felt a need to include it in the show, but the show is a kinder, gentler version of the novel. And this piece just didn’t make sense in the context of the more nuanced and endlessly more interesting version of the cult leader, The Prophet, in the series. So they do a bit of yada-yada with the whole thing, and it’s a little confounding. But, hey, nothing’s perfect.

This all said, the acting in the series is incredible in parts. There are scenes, like the one where we think this secondary character, Frank, is losing his mind, but he ends up with the most glorious rapping performance of “Award Tour” by A Tribe Called Quest that just sends this thing into my hall of fame. And across the board, the performances are top notch. The show just looks beautiful and, as mentioned, the set design and costume design is noticeably stellar. But, more than anything, the show’s creators give the audience exactly what they want. But without it seeming cheesy or unearned. So many shows these days really get off on torturing their characters. The bad ones, sure. But also the good ones. Everyone goes through the trials of Job, and often times the results are not positive. In this tale, losing almost everyone on the planet was enough. That’s the big loss. The unending pain. Why grind them into dust? Why not show your characters some grace? Why not have them reconnect in meaningful ways? Why not give them as much of a Hollywood ending as they can possibly get? Why not take the horribleness and devastation of a deadly global pandemic and show that daisy rising up through the cracked asphalt? They show us it’s all going to be okay. And, yeah, I’m okay with that.