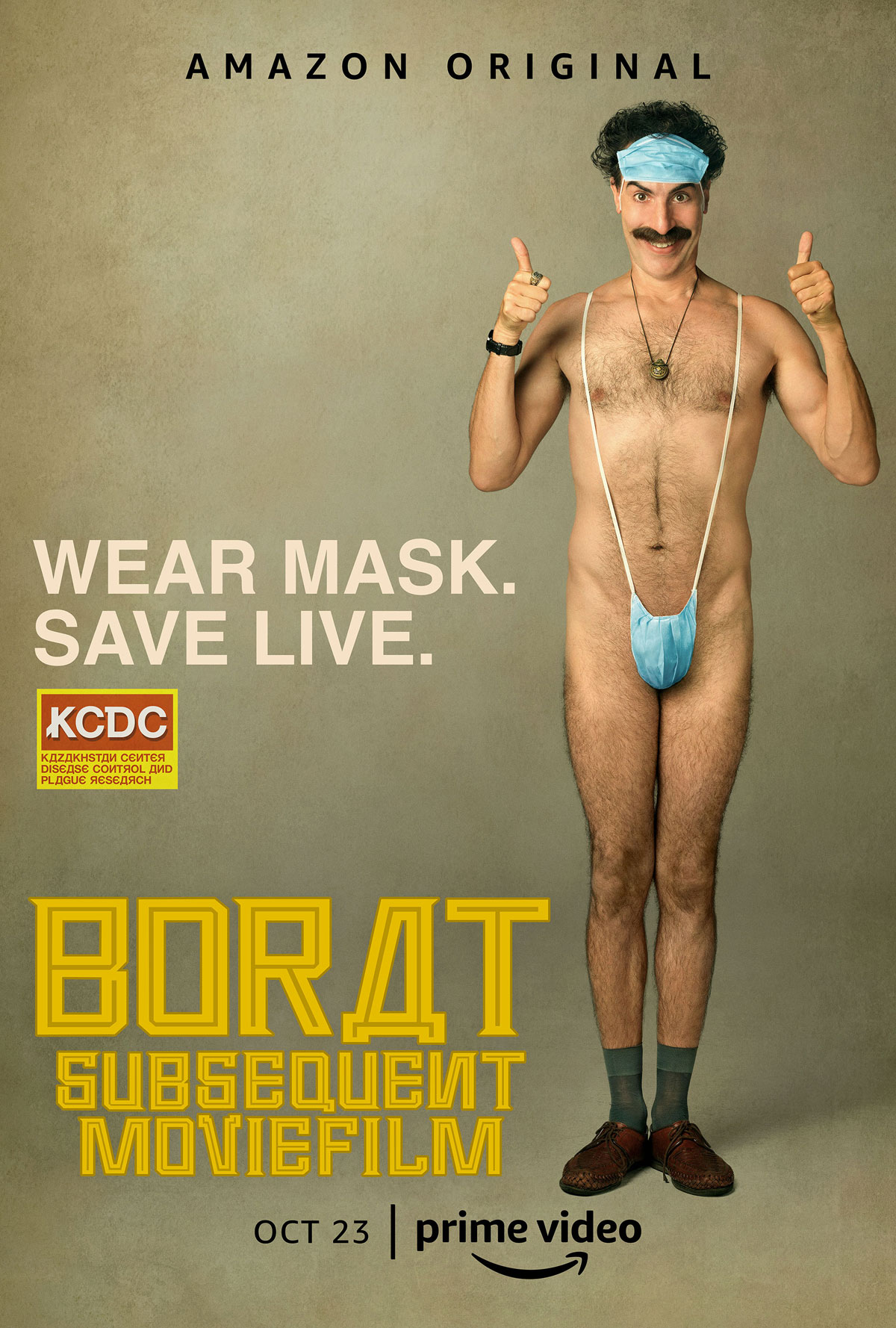 Oh, Borat! You Kazakhstani scamp. You tickled our funny bone in your 2006 film Borat: Cultural Learnings of America for Make Benefit Glorious Nation of Kazakhstan. You made us laugh at ourselves. And ask the question: why the hell do we sell so many different types of packaged cheese in our grocery stores? You spawned a million memes and buzz words and horrible dads who thought they could be comedians just be saying (in some mock accent) “My wife!” It was great. It was cringey. And then it was bad because people seemed to kind of miss the real genius of the thing, as every douche over-quoted and then probably got sick of your schtick.

So why re-up in 2020 with Borat Subsequent Moviefilm: Delivery of Prodigious Bribe to American Regime for Make Benefit Once Glorious Nation of Kazakhstan? Mainly because the US has become so ridiculous that only something and someone like Borat could put a mirror up to our collective stupidity and make us laugh. Because things like Veep and even real-life, Bush-era insanity like Vice just make us feel sad that they can’t reach the heights of ridiculous of the America we’re currently living in. So it takes a savvy actor playing a fake, over-the-top Kazakh to make us laugh at ourselves by pretending that he’s making fun of his country when he’s actually making fun of ours. Which we get. But probably not everyone watching it will. Like the same people who think that our current President wasn’t always a NYC clown who thought he wasn’t the butt of the joke for years on TV, on radio and in the local tabloids. Because there’s no such thing as bad press — even if it’s dunking on you over and over again.

The plot is not really relevant, but essentially a newly freed Borat is sent to the US by Kazakhstan’s Premier to deliver a famous monkey actor and Minister of Culture named Johnny to Mike Pence. It’s absurd, of course, but just hearing Baron Cohen say “Johnny the Monkey” over and over made me laugh. All that setup is fiction, of course. Because, well, Baron Cohen isn’t in a Kazakh gulag. He’s a proper British man who’s been busy acting in The Trial of the Chicago 7 and some mini-series called The Spy. The rest of the film is a mix of “real” setups followed by scripted scenes. It’s never quite clear who’s in on the joke and who isn’t. We have to assume that all the non-actors, including a couple Trumpist rednecks who take Borat into their home during quarantine, a babysitter who gives caring advice to Borat’s daughter, Tuta (Maria Bakalova), and, well, Rudi Giuliani, were just unwilling participants in Cohen’s wackiness. Even if it sometimes seems unbelievable that these people would be so gullible or naive.

The thing is, Baron Cohen manages to bury cutting social commentary inside of the stupidity in such a way that stupid people can watch his movies as just straight stupid fun, while people with a brain in their head see the intelligence leaking through. It’s really an amazing feat of goofball gymnastics. And, honestly, what makes these Borat movies pretty universal. Though I imagine they’re not so happy about them in Kazakhstan. I have heard that they’re very popular in Israel, however, as the gibberish that Borat spews throughout the movie is mostly Hebrew — so it probably takes on a whole new level of funny when the actor is babbling in your native tongue while spewing anti-Semitic nonsense. The revelatory thing — as you’ll read everywhere — is Bakalova. Chosen from some 600 auditioners, she won the role having never seen the first Borat or really even knowing what the heck was going on. And she’s great. Funny and sweet and completely up to the task of matching Baron Cohen’s absurdity, physicality and adlibbing. Which is pretty amazing considering her dearth of experience. The fact that the two of them play the father/daughter thing so convincingly as they jibber back and forth in two different languages is testament to her ability to hang with him.

Still, it’s shocking that anyone buys their schtick. From requesting a “Jews Will Not Replace Us” cake (and having the woman actually deliver it) to getting a bunch of dumb Republican rednecks to sing along with his “Wuhan Flu” song to getting a dude to sell him a cage in which to place his 15-year-old daughter, it’s just dumbfounding how willing people are to do racist and misogynistic things on camera. Which, of course, is the point. Because if they’re willing to be this ignorant when being filmed, imagine what happens behind closed doors. It also makes you wonder if these people being exposed are willingly horrible or if they’re just, honestly ignorant. This is best illustrated by the aforementioned conspiracy dudes who are clearly not the brightest bulbs, but are willing to take a lost stranger into their home and in doing so are almost (almost) sympathetic characters. Albeit avatars of the right-wing brainwashed masses. Whatever the case, the movie gives everyone their due. Which is the magic here, as even the clownish rubes have the opportunity to show their humanity. Except Giuliani, of course, who is and always has been a horrible person. Seriously, fuck that guy.