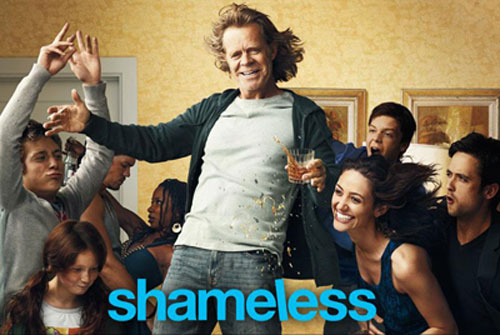 I just finished watching the first season of Showtime’s original series, Shameless, on On Demand. And may I say: how the fuck did I ever live without On Demand and my Roku? Between this On Demand doozy (watched on nights when Ms. Hipster was out cavorting or working or whatever) and our joint viewing of the complete new Battlestar Galactica series on Netflix streaming on the Roku I shudder at the thought of the old days when we’d be stuck watching re-runs of Modern Family, Pawn Stars and Finding Bigfoot all summer long.

So, semi-modern technology has brought Shameless to my doorstep. At first it was just something to have running in the background one night when the Missus was hanging out with her band. I mean, it’s William H. Macy and a bunch of other folks I don’t know, so how bad can it be? Plus, it’s another one of those debased Britcoms that we Americans (land of the death of the original idea) decided to “re-imagine.” So it’ll most likely at least have a pretty edgy approach. And, as it turns out, the thing is pretty edgy — almost a little too much for my delicate sensibilities. At least at first.

Macy plays the drunken debauched patriarch of the Gallagher family. His six kids, varying in age from like 2 to 22 (or so), live in a house together and are mostly cared for by their oldest sister. Macy (Frank) rarely comes around and the mother isn’t in the picture. He will drop by on occasion to collect disability checks, to hide from money collectors and maybe pick up some food. Mostly he hangs out at a bar in their Chicago neighborhood, harassing the patrons and spouting nonsense to whomever will listen. The family is rough around the edges, running scams, stealing, basically doing what they can to survive. The first couple of episodes painted a bleak picture and kind of made the characters, in their willingness to fuck over anybody, completely unlikable and relatively cartoon-ish. I had an impulse to turn it off and never come back. But out of desperation, I tuned back in to this group of despicable misfits. And as the episodes progressed, and we learned more about each character, and their dossiers got fleshed out, I became engaged.

Now this ain’t no PG-rated ride. If there’s a female character, she will get naked. If there’s a male character, he will get punched or punch someone else. And in between all the nudity and beatings there’s tons of fucking. This seems to be a theme of Showtime shows. See Californication, where lead character Hank Moody (David Duchovny) drinks, gets punched a lot and fucks everything that moves. In fact, there’s a book written by him on the series that is stolen buy one of his conquests that is changed to be a memoir and renamed “Fucking and Punching.” So Shameless could have stolen that title and just called is “Drinking, Fucking & Punching.” There’s just a lot of it. Now, I’m actually a big fan of people getting punched in stories. I think it shows raw human emotion and all that happy horsehsit, and I suppose drinking goes along with that. The fucking part is just what apparently happens to people.

So there’s Macy and Joan Cusack, who plays his agoraphobic kind of girlfriend and this Emmy Rossum chick whom I’ve heard of, but don’t think I’ve seen in anything since she was a child. Which is creepy, because she’s naked in practically every episode (not because she doesn’t look good–cuz she does–but the whole child actor getting nude thing is a little weird). There are a couple other recognizable character actors in peripheral roles, but none of the main family folks look familiar to me.

The acting is solid all around, and that’s probably what makes the show compelling. That, and they’ve managed to make each of the characters recognizable on his/her own and built their personalities well. It’s a series that takes a little while to build, and certainly takes some jaw-dropping turns just in its first season, but the writers have managed to create enough mystery and conflict to make it a pretty damn good watch. They’ve also done a decent job of building plotlines and development that opens a whole universe of possibilities ahead of them should Showtime renew the series for a few years. So, assuming I decide to keep Showtime and my completely insane cable bill another year, I guess I’ll be reporting back on what will most likely end up being a lackluster year two (because it just usually is). Or, if I decide to chuck it, I’ll be reporting back in three years after I’ve streamed year two on the Roku.