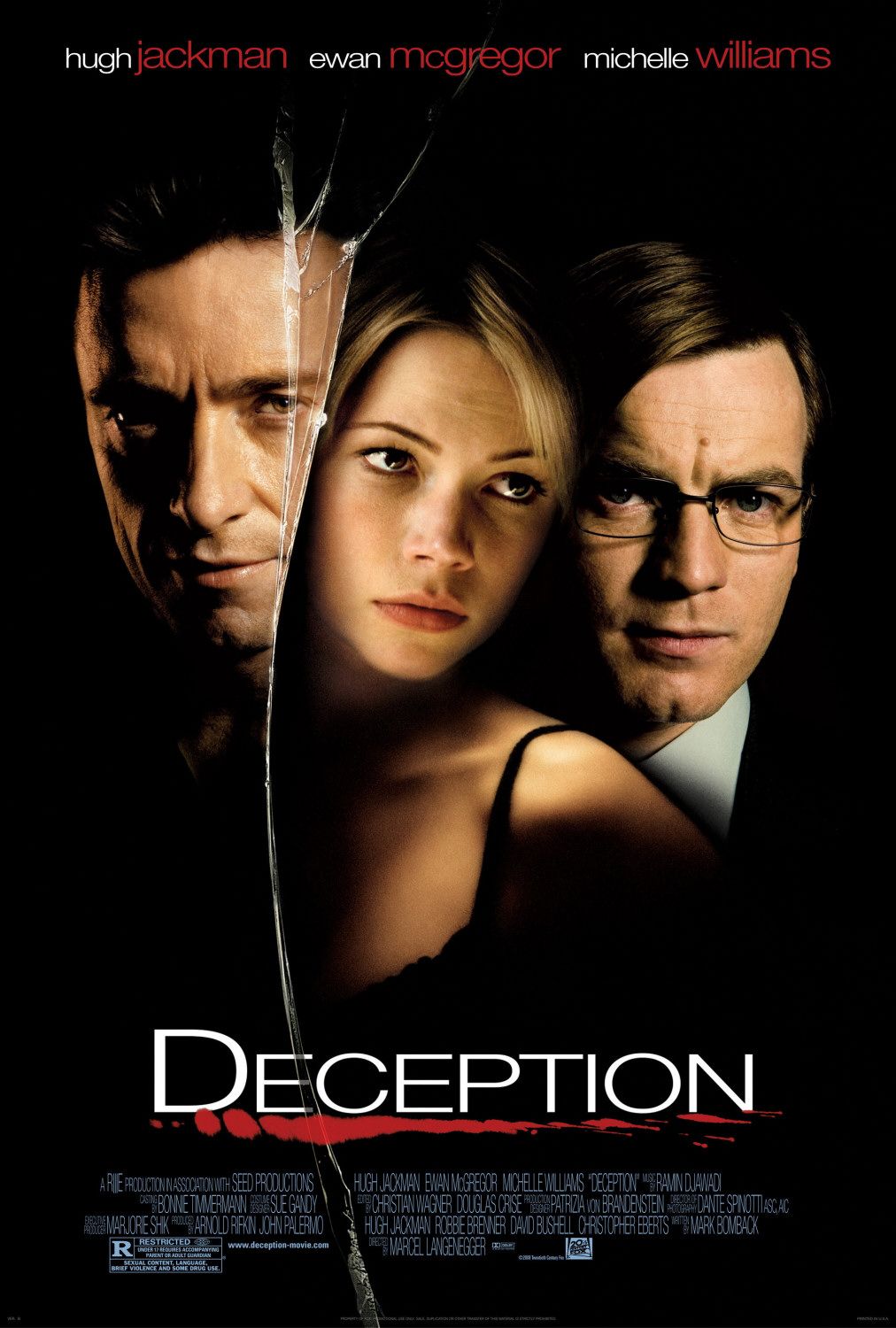 What utter garbage this film was. Oddly it’s not completely dissimilar from another mediocre film I saw recently called Following. But this one is even more predictable and pathetic considering the cast and what I can only assume was a decent budget. Mixing elements of the aforementioned movie, Basic Instinct, Eyes Wide Shut and every god-awful B-movie that tries hard for that noir-ish lilt, this thing manages to mix and mash its way to a dizzyingly boring conclusion.

I only watched this thing after running across it in the On Demand section of the cable guide because it starred Hugh Jackman, Ewan McGregor and Michelle Williams. I mean how bad could it be? Turns out that when you run across a film that has relatively big stars in it and came out a year before you’re watching it, and you’ve never even heard of it before, that nine times out of nine it sucks. As proof I give you Deception. As if I shouldn’t have been able to tell from the blah one word title. You know from the title that our somewhat smarmy cool guy, Hugh Jackman, isn’t on the up and up right from the start. Why else would they call it “Deception?” Maybe they should have titled it “The Helpful Stranger” or “My Best New Friend” so as to throw us off the trail of Jackman’s ill will toward the nerdy accountant played by Ewan McGregor (whom I’m starting to believe should just go back to playing Scottish drug addicts and zombie killers and stop with the shy American guy thing).

Anyway the plot, for what it matters, goes a little something like this: Ewan McGregor works for some sort of consultancy as like an auditor of companies’ books. One late night in the office of his current client he meets up with the charismatic Jackman, who befriends him, introduces the poor guy to sex clubs and whatnot, and then promptly disappears to Europe somewhere, but not before “accidentally” swapping cell phones with McGregor. Our friend Ewan soon learns that this phone is his ticket to a very exclusive sex club, which he can take advantage of at any point by just making a call or answering the phone. Fishy. Of course he’s resistant at first, but at the urging of Jackman, now calling remotely, he dips his toe in the water. And then again and again, until he meets Michelle Williams, our femme fatale of sorts. Or is she? Red herring! Hugh Jackson is in fact the femme fatale! Ew, I think.

There’s then some kidnapping, blackmail, murder (which seems out of the blue), embezzlement and more computer shit that could never happen in a million years. And at the heart of it? I’ll give you two guesses, but first a hint: the name of the film is “Deception.” Argh, it’s so predictable that even the filmmakers seem to pull the plug on the mystery and just go for more of a shot ’em up in the end.

Please don’t waste your time watching this, even if Hugh Jackman wasn’t terrible (and rippling) in his role and even though it might help you feel better about your writing skills and general creativity. Indeed.