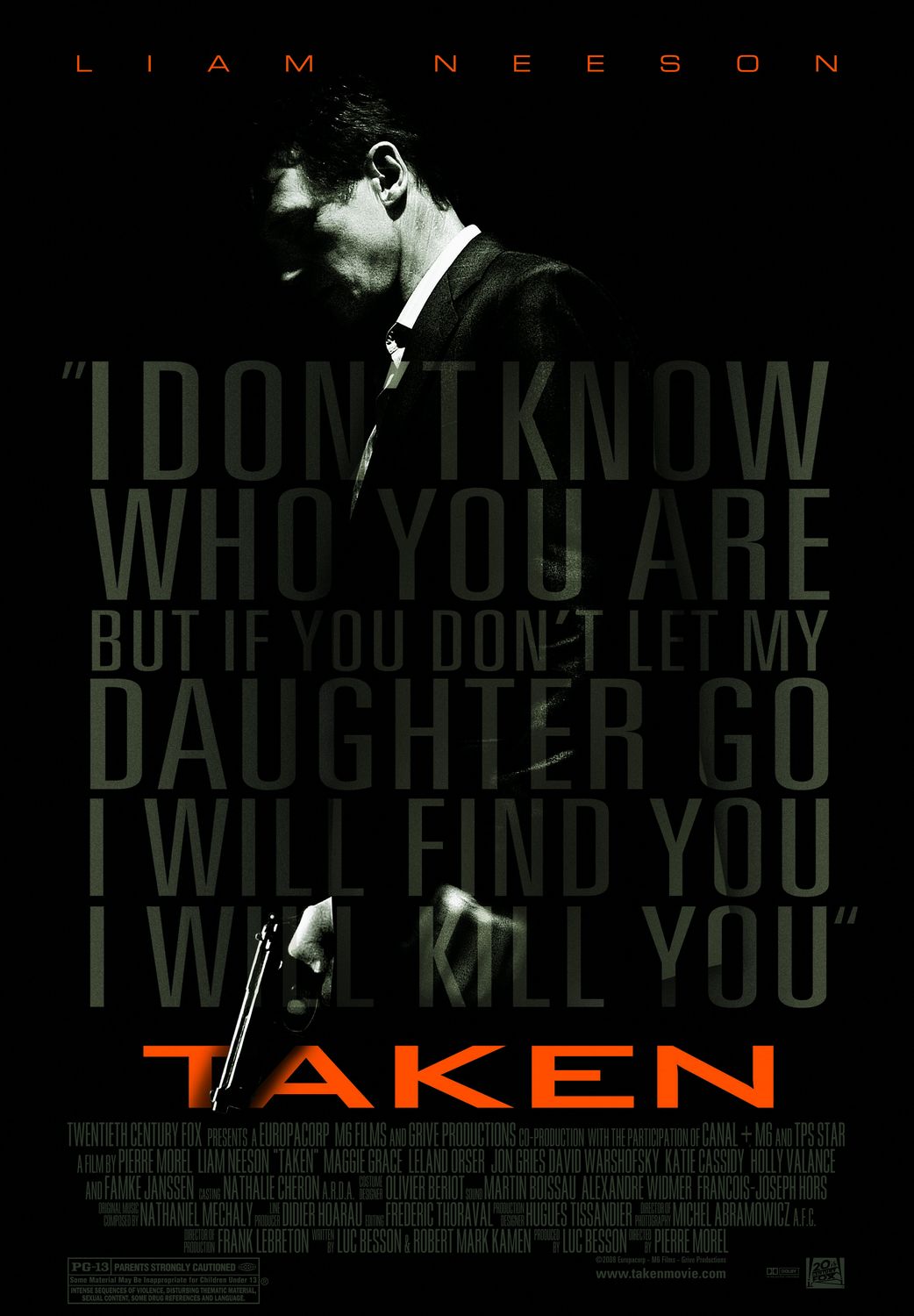 For a gigantic dude, Liam Neeson seldom plays the heavy. And even when he does, he’s got a softness underneath that belies his rough-hewn exterior. I’m not saying he’s namby pamby (except for maybe in Satisfaction), but there’s something oddly human at the heart of everything he does. The end scene of Schindler’s List is enough to cement him in the annals of acting lore for eternity. I dare you–dare you–to not tear up when he takes that Nazi pin from his lapel and goes into his mini-monologue.

This movie tried to exploit that hard/soft quality that he possesses by making him the ex-CIA assassin with a heart. You can tell he has a heart because he stares longingly at his estranged daughter’s photo to a cheesy music montage and shows up awkwardly to her birthday at her stepfather’s mansion with a karaoke machine because only he knows she wants to be a singer when she grows up. Unlucky guy, though, as the stepfather gets her–pause–a horse! We also find out that he gave up his successful position as a CIA agent to be closer to the daughter he never saw growing up because he was indeed a CIA agent. So now we know the guy has a heart on for his daughter and is deep down a good guy, but instead of relying on him to show this through his acting, we are treated to terrible directorial choices and wonky exposition to let us know this is the case. All this while placing awkward dialogue in his mouth and making Qui-Gon Jinn into Droopy Dog. Why hire Neeson if what you really want is Jason Statham?

So things come to pass and his daughter gets this opportunity to go to Paris for a while to hang out. Dad, the ex-CIA agent, is nervous about this and all the inherent dangers of sending a teenager to Paris with one of her goofy friends. No sooner does she get there than, voila, she’s kidnapped! Wow, the movie would have really stunk if that didn’t happen. The coincidence couldn’t be just that! It must be something connected to the uber-wealthy stepfather or Neeson’s past association with the agency. But, no, it truly is just a coincidence. And that’s where any interest I had in this movie went in the proverbial toilet.

So then we get exactly what we expect. He threatens the kidnappers, goes to France, shoots and punches dudes, tortures and runs over guys and even shoots and innocent woman in the arm just as an f.u. to a French official he gets pissed at. All this is done quite awkwardly and might as well have been a so-so episode of 24. Although for some reason, Kiefer’s 5’9″ frame looks much better jumping and shooting than does the conspicuous 6’4″ lank of 57-year-old Neeson. The movie ends exactly as you’d think it would (complete with a virgin auction and a shootout on a boat), although after destroying half of France and shooting said official’s wife, Neeson seems to be able to fly out of Charles de Gaulle and into LAX with absolutely no problem.

So ultimately the movie is by the numbers, Neeson’s true talent is wasted and his screaming and whispering is absurd. Also, he’s no Jason Bourne. So hope when you dial up this bad boy on Netflix that it is indeed taken.