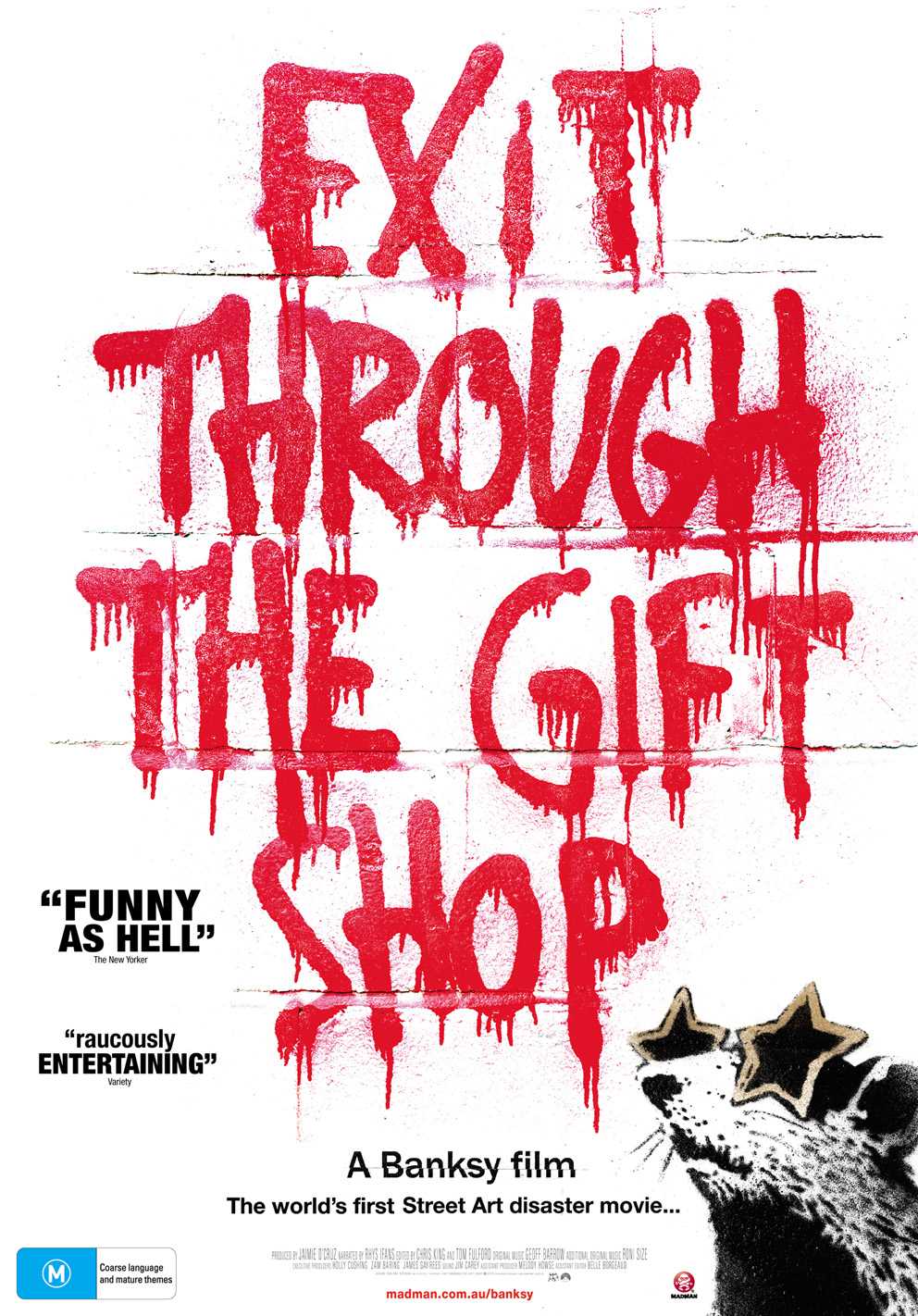 Exit Through the Gift Shop

What is art anyway? And how and where do art and commerce intersect? I suppose these are the central questions in this mockumentary / social critique. The problem is, of course, there is some debate as to whether the “art” that the supposed artists in this film create is actually art. But maybe that’s the whole point?

So there’s this French buffoon, Thierry Guetta. And I mean buffoon in the nicest way. The guy is super-enthusiastic and is infectious in that spastic, French way. He owns a successful vintage clothing business on Melrose, but after running into a cousin in France who happens to be a “famous” street artist named Invader, he becomes completely obsessed with the genre and dedicates his life to filming the exploits of these street artisans and their illegal exploits. Art? Sure. Vandalism? You betcha.

He is claiming to be filming their nighttime escapades in an attempt to create a documentary about street art. What he’s really doing is hoarding film stock and quickly committing the ultimate journalistic sin and becoming an accomlice, playing watchout while they whitewash, holding up posters while they paper buildings, etc. He makes his way through the genre’s hierarchy until he meets the pinnacle in Shepard Fairey (best known for his Obama portrait and his Andre the Giant ‘OBEY’ campaign). And from Fairey he is introduced the mysterious and as-yet unmasked Banksy.

Banksy takes an interest in the guy and takes him under their wing. As I said, the guy’s presence and enthusiasm is infectious. Finally at some point he is actually asked by Banksy to see some of his film. Not having anything to show, no plan and no skill, he goes home and puts together the most unwatchable piece of shit ever slapped together, Life Remote Control. And here’s where things get funky. Banksy, watching the film and realizing that there was no real film to be had, asks Guetta for his footage so he might have a go at it. And in doing so offhandedly mentions to Guetta that now that he’s a filmmaker, maybe Guetta should try his hand at art. Oh, what a mistake.

And from there, what seems like an innocent remark from Banksy gives Frenchy the idea, after watching so many of these guys do it, that he can be the most prolific, most famous street artist ever. Issue is, and this is evident from his “film,” the guy has zero talent. And he’s coming at it from completely the wrong place. So he pretty much hires a bunch of graphic designers with the rest of he and his family’s money to put together his new art persona, Mr. Brainwash. He basically creates an assembly line of artists using Photoshop to put together what are in essence imitations of other artist’s stuff he’s seen. And he pumps out a lot of shit. Though his actual contribution, besides agonizing over what wall to hang stuff on at his giant art opening, is not truly evident.

And, of course, the guy becomes mega successful, with Banksy and Fairey bemoaning the fact they created this fraud monster. It’s like Pearl Jam apologizing for Creed. The issue for me is that I honestly don’t see much of a difference between taking an old photo of Andre the Giant and writing ‘Obey’ on it, and putting Marilyn Monroe hair on a bunch of different folks, including Leonard Nimoy and Marilyn Manson. All the shit looks the same to me. It all is kind of found pop art. It’s all kind of silly. I mean Guetta’s cousin, Invader, makes simple little 8-bit mosaics of Space Invaders and puts them on buildings and bridges and lamposts. It’s very cute, but, really, what’s the mind-blowing idea there?

But, again — and we’ll go with the popular theory here that Banksy and Fairey are behind this whole Mr. Brainwash thing and that Frenchy is nothing but an actor — what point are they trying to make here? That the public is stupid for buying art that is meant to entertain and amuse and not be hung on walls and bought at auctions? It took me a while to get the title of this film (because I’m slow), but obviously this is a reference to most art museums and their funneling of patrons through the gift shop before letting them exit the premises. The gift shop, where facsimiles of the actual art is sold for a price so people can take the fake, cheap shit home to hang on their walls. Presumably this is the commentary about Guetta here – or at least what Guetta (who is a shill, after all) represents.

And why, you ask, do I go with the whole hoax over real idea? One big thing and one little thing. The big thing is that Guetta’s family doesn’t seem to be horrified as he sells his business and ditches them to go filming around Europe and abandons them to follow a nonsensical fantasy. And then proceeds to spend whatever money is left on a giant art show that on the surface looks like it’s going to be a colossal failure. The little thing is the scene where Mr. Brainwash falls and breaks his foot right before the big show. It’s too perfect. And then the following scenes where he’s being wheeled around in a wheelbarrow are just too silly. There are a ton of other facts that point to hoax, but these two things alone put me in that camp. That said, I don’t care that it’s fake. It’s a fun concept, and if I were a smarter person, I would understand what was going on in terms of the social commentary thing. All I know is that it was way more successful and much more clever than another film of questionable origin that I saw lately, I’m Still Here. What genre will Banksy conquer next?