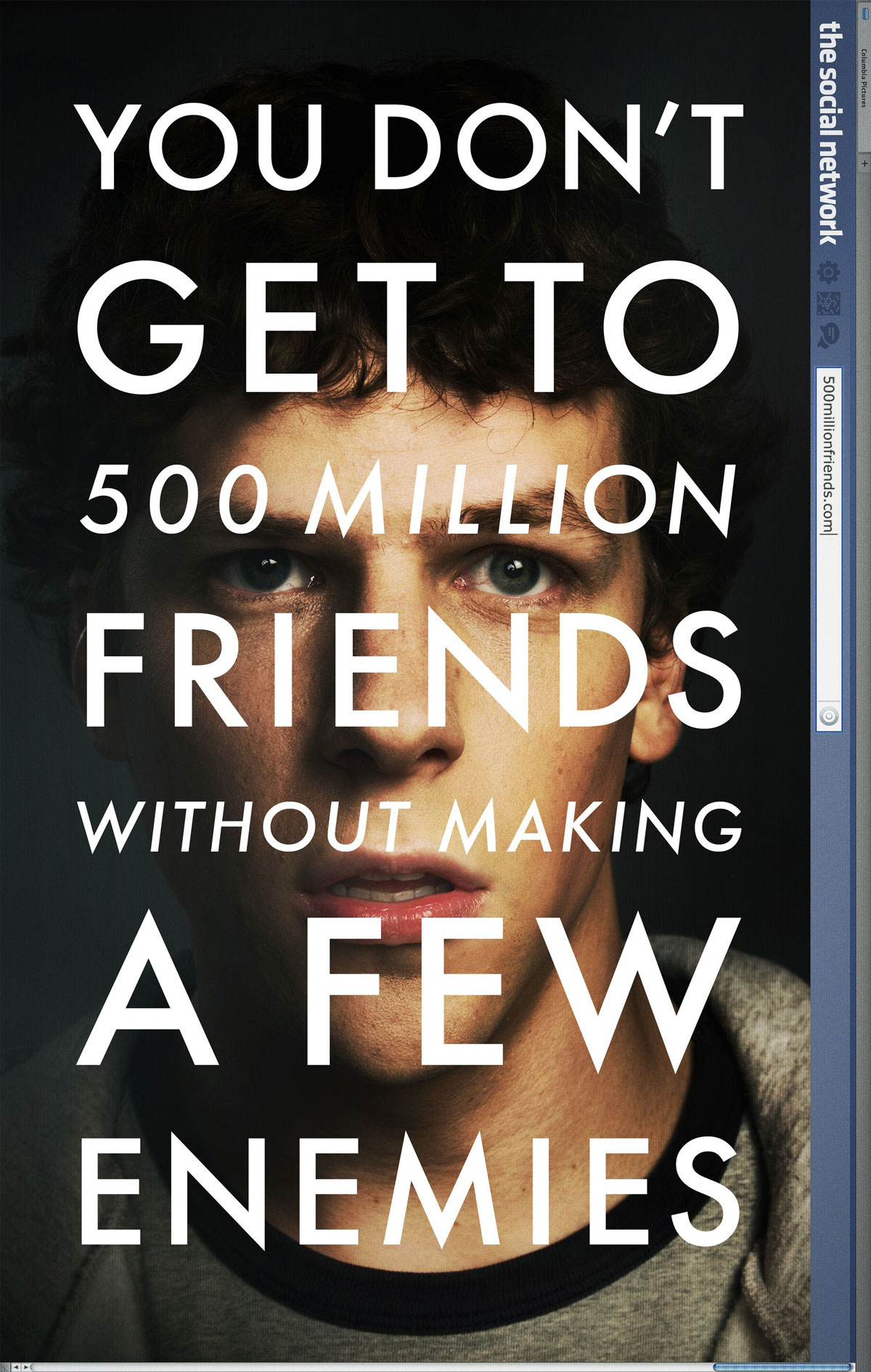 Thanks Mark Zuckerberg for making a platform that my mom thinks is email, but it’s not. Thanks for creating something that stresses me out on each Hallmark holiday and random co-worker’s birthday that I’ve somehow missed putting some inane comment on their wall. You suck. But, lucky for us, the fictional you is a lot of fun. And your story — real or not — makes for great moviemaking.

The Social Network was a pretty ballsy thing to do back in 2010. The platform itself was in its relative infancy, still on the way up. Way up. But perhaps that turned out to be a good move. Seeing as Facebook has found itself at the center of multiple firestorms; political, financial and societal. Zuckerberg and his weirdo Caesar haircut has become a touchstone for out-of-touch, robotic CEO douchenozzles who are so smart they’re dumb. In other words, a perfect person to make a movie about. And they got in on the ground floor.

Leave it to David Fincher to bring this story to life. And of course to Aaron Sorkin for injecting it with his coke-addled, rat-a-tat-tat dialogue. It’s a pretty amazing one-two punch. Two very dude-y dudes doing their professional thing. It’s taut and harrowing for a movie that is mostly people sitting in rooms talking. There is some mouse clicking and I believe a couple keg stands at one point, but otherwise most of the scenes take place in dorm rooms, court rooms and living rooms.

You know the story. Zuckerberg (Jesse Eisenberg) is this know-it-all kid at Harvard. Of course, we have to assume that most, if not all, kids at Harvard are know-it-alls. But he seems to be at a higher level of assholish self-confidence. He’s clearly not an upper-crust dude, but let’s not fool ourselves that he’s some street urchin. He grew up in Westchester, the son of a psychiatrist and a dentist. Don’t let the hoodie sway you. He codes some dumb Hot or Not ripoff that just rated female Harvard students. Again, this seems like a pretty limited hot pool.

The thing did well enough that it got the Winklevoss twin’s (Armie Hammer) attention. They were exactly those Harvard types that you imagine. Tall, rich and crew-y. They brought in Zuckerberg (just the coding nerd they needed) to create their dumb Harvard app. Instead of working on their shit, he kind of took the germ of their idea, built on it and eventually created Facebook. I skipped a bunch of shit in there, but that’s essentially the plot.

The movie follows the aftermath of Facebook starting to blow up and the twins’ desire to recoup on what looks to be a potential billion dollar company. And Zuckerberg’s subsequent ability to throw everyone under the bus, including his oldest (and only) friend and first investor/partner, Eduardo Saverin (Andrew Garfield). While also embracing the cool kid in Napster’s Sean Parker (Justin Timberlake). It paints an incredibly unflattering picture of Zuckerberg.

On the one hand he’s this incredibly intelligent guy, but is completely socially inept with women and men alike. He is written as an unfeeling robot who doesn’t care about money (which is mentioned many, many times by everyone), but is just interested in being accepted by those he thinks are cool. And is jealous and vindictive against people who he feels aren’t deserving of being as cool as he feels he should be. One imagines that this stems from a deep-seated insecurity about himself. We are reminded about this over and over again in the film, as he slouches and snarks his way through the legal wranglings around Facebook. And then is just a total dick otherwise.

Eisenberg is amazingly good playing Zuckerberg and delivering Sorkin’s dialogue. It’s incredibly easy buying him as this douchebag genius. He embodies it. Garfield, as the put-upon Saverin, is also super-good. You can see him struggle to understand his friend Mark, while also being in awe of him. Until disillusion sets in. Even Timberlake, who plays Parker as this incredibly charismatic marketer, does it with an ease that is instantly likable and an incredible turn off at the same time. He’s the comic relief in a way, and Sorkin gives him some great lines to serve up to the rest of the cast. The whole thing, from directing to writing to acting, is just incredibly tight.

I generally hate biopics. They leave shit out. They change stuff. They delve too deeply in places that they shouldn’t. And stay too shallow in places they should go deep. This movie, though, I don’t really care. I don’t mind if they bent the reality of the situation a bit. I don’t care if Zuckerberg wouldn’t essentially be a virgin loser in his mom’s basement had he gone to SUNY New Paltz rather than Harvard. I don’t care that Jesse has way better hair than Mark. The fact that a ten year old Hipster Jr. Jr. was engaged with this film and couldn’t even give a minute to Little Women is testament to the universal awesomeness of it. It’s clever, smart and slyly funny.