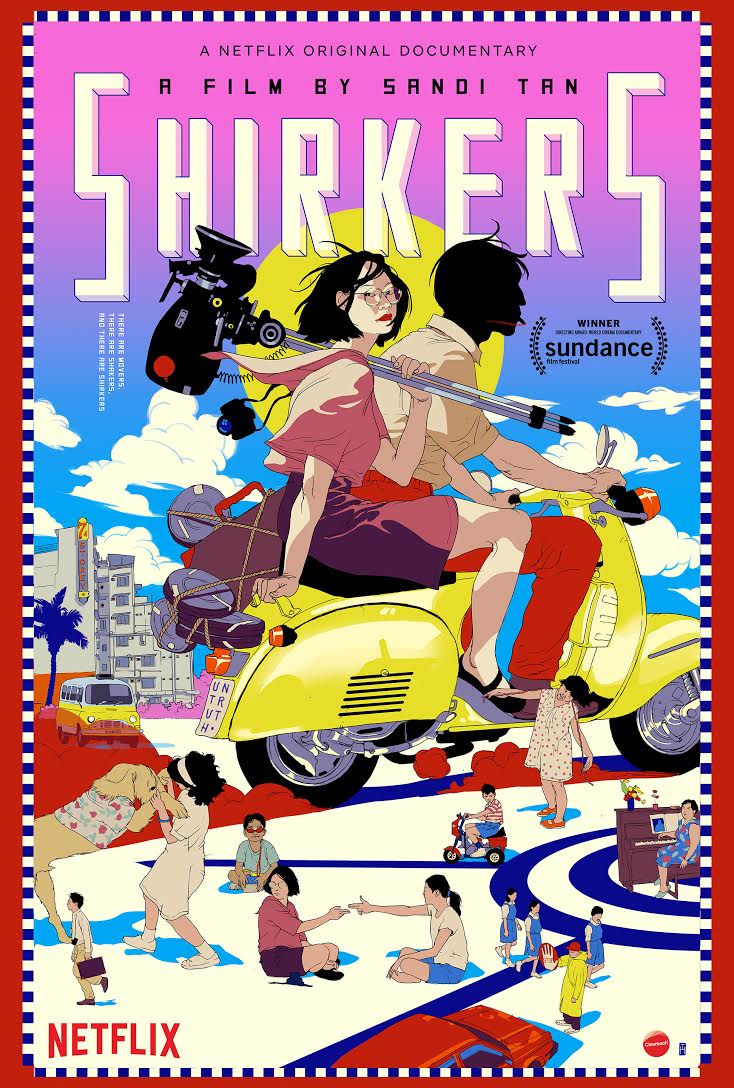 I got the opportunity to see this film at the Montclair Film Festival, which was attended by the filmmaker herself, Sandi Tan. It’s always fun to get a little peek inside the artist’s head, especially when the film itself is all about the her and her memory of the subject matter. In fact, the entire movie is narrated by Sandi, about Sandi and colored by her memory. I honestly don’t see a lot of documentaries, so it’s a treat to see one like this that is presumably different than most of the subject-specific or educational ones that are out there.

To describe the film is to get kind of meta. And, honestly, that meta-ness is what drew me to the film to begin with. It seemed to have some layers — at least in its short description — that most documentaries don’t. But the basic gist of the film is that Sandi and her best friend, Jasmine Ng, were teenagers growing up in the very conservative and somewhat repressive atmosphere of early-90s Singapore. The two girls loved American music, Coen Brothers’ movies and French new wave films and basically anything and everything “cool” from outside of their closed-off society. They were quirky and weird, but also driven by something very creative and unique, especially for young girls in a country that seemed to value creativity very little, art not so much and girls even less. But their passion for music and film drove them to enlist another young woman, Sophia Siddique, to make their very own film. As part of their figuring out how to actually get the film made, they ended up also bringing in an adult male teacher of theirs named Georges Cardona who claimed Hollywood connections and the ability to direct the film, which would be written by Tan. He was a film aficionado and had some film credits that, in retrospect, feel super suspect. That last choice would turn out to be a bad one.

So the meta angle here twists the expectations of a “making of” narrative. Instead of the entirety of the film being about the young ladies making their very own film in a country that made that endeavor seem impossible, the narrative bends away from that and ends up becoming a bit of a journey based on a mystery based on a voyage. Because, just as the young ladies thought they had succeeded in creating this visionary film, it was taken from them. Cardona essentially made off with the film after it was in the can and disappeared. So their film (well, Tan’s film, really) was a ghost before it even had a life. Tan tells the tale of creating the film, but then spins it into half background mystery of Cardona and his life and essentially her coming to terms with the crowning achievement of her young life being stripped away from her. The whole time, we’re seeing clips from the film (also entitled Shirkers) in her documentary. So we have a sense — before it’s sprung on us that Cardona made off with the only print — that she got at least parts of it back. But she does a great job of weaving this circular narrative that kind of keeps you guessing how the heck this all came to be. The film itself is kind of this trippy, nostalgic look at DIY filmmaking of the early nineties and Tan does a great job of presenting a very familiar feel that kind of borrows from or is inspired by the same influences she mentions inspired her as a teenager. It’s certainly a little bit out there, but also maintains just enough structure to add a compelling story to the striking visuals.

The thing is, Tan is kind of an asshole. She has interviews with her old friends 25 years on and Ng pretty much says on camera that she’s a jerk and tortured her and seemed to really not want to be interviewed on camera. Siddique was more nuanced in her critique (she’s currently the chair of the film department at Vassar), but seemed to have some similar notions about Tan’s controlling, stubborn and somewhat combative nature. This was all verified by Tan, who did a Q&A after the film. So when she’s telling the story of tracking Cardona and the weird stuff he does to occasionally taunt her with her own film, the emotional reaction from the audience is not what it would have been had she taken this woe-is-me outlook. She’s certainly not that type of narrator, nor came off like that in the Q&A. I think the audience feels frustration for her, but she kind of refuses to give into that, almost making Cardona a sympathetic or pathetic character. Sure, she’s upset her film never saw the light of day, but the anger — which seems more evident in her friend, Ng — is muted by time and she seemed almost surprised she was able to ultimately make about her film.

The thing that confused all of us at the screening was the fact she seemingly got the film developed— or at leas enough of it to put a bunch of clips in her documentary. And if she’d gotten the film developed, why hadn’t she just edited together the film based on the original script? In the Q&A she seemed put off by the question. Which, of course, confused us even further. She claimed that she had 70 canisters of film and that the original script notes had been lost in the intervening 25 years. Also, Cardona had either destroyed or lost all of the sound for the film. Which, when we thought back, made sense, as we hadn’t heard any dialogue in the clips (though they’d added some music and ambient sound to liven it up). Regardless, we thought, she had the original script, and 70 reels isn’t that much film to go through in order to match the original script. Why couldn’t she at least cut together a silent copy? Or even just dub in stuff in post? She claimed she hadn’t really thought about it, and just kind of assumed it would be too much work. The audience was almost incredulous at her answer, some laughing uncomfortably. How had it not dawned on her to do this? A couple people in the audience even offered to help her. She said she’d take their info after the screening and talk to them about it. There were a bunch of head shakes and eyebrows raised by her seeming nonchalance. But I supposed that’s just the kind of quirky person she is that makes for an interesting protagonist. After all, she said, the person who had edited and done the motion graphics on her documentary was basically a barista at Starbucks when she hired him seemingly on a whim.