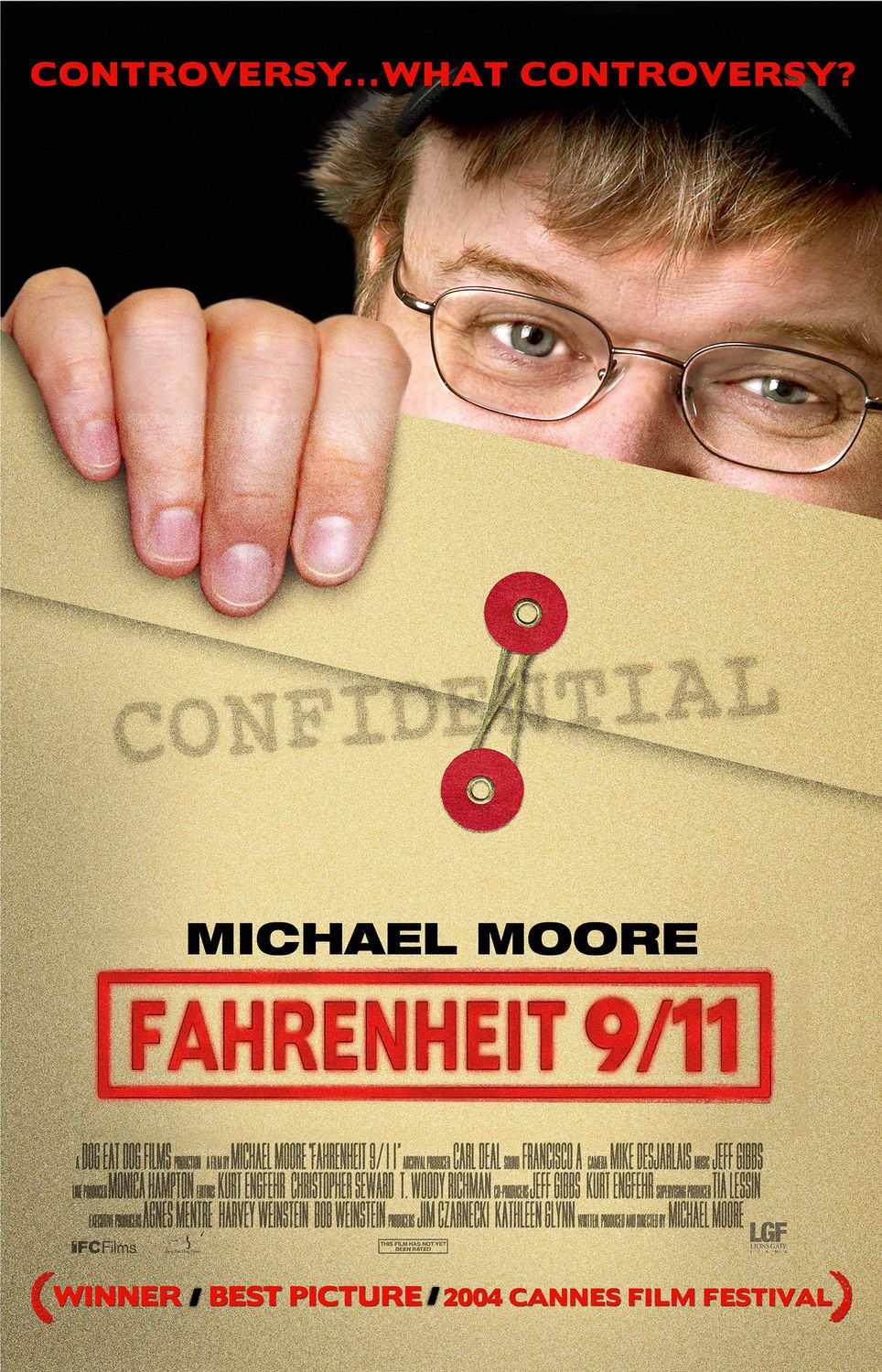 In the wake of the crushing defeat that was the 2004 presidential election, I can’t help but think that all the hype over this movie was just a bunch of overblown piling-on. People love conspiracy theories–myself included. They love to talk about who killed Kennedy and what happened at Area 51, but like any good government scandal it soon fades into the woodwork when people drop the pursuit of truth in favor of worrying about how to feed and clothe their families. After the general public loses interest, all that is left are the kooks, outsiders and folks in foil hats.

Unfortunately, too often Moore is the guy playing that role, ranting and raving in his broken down sneakers and fat pants about things that are fascinating for about two hours, but exit our collective conscience as soon as work gets tough or the kids are screaming. This is painfully true when we consider the scary-ass thing Moore reveals in this film and then we look at the way the election panned out. It made not the slightest bit of difference.

Everything he uncovered or brought to light resulted in all the states that vote Blue voting Blue and all the states that vote Red voting Red. Net result of nada. Even I, the life-long lefty, felt the let down of reality after watching this thing. The credits rolled and I looked at the Mrs. and told her it was some interesting stuff, but that it wasn’t going to change anyone’s mind–and that it might, in fact, cause one of those “unpatriotic” backlashes that The Right loves to pull out whenever anyone has the audacity to question a sitting Republican president. These pieces of leftist propaganda do nothing but polarize even more people against what 99.999% of the U.S. sees as the corrupting force of pinko Hollywood.

As usual, Moore lays it on thick. There were even instances where I found myself saying, “Now, that’s not fair” when I found Moore lobbing attacks against the Bush administration that hit on things that were completely out of his control. Granted, there was some seriously scary stuff going on, not the least of which was the fact that the Bushes made special arrangements after 9/11–while all commercial air traffic was grounded–for members the Bin Laden family to fly from the US to Saudi Arabia. Moore goes on to show the bizarre business connections between the Bush family, the Bin Laden family and the rest of the Saudi royals. This was one of the more convincing portions of the film, and really made me wonder, after watching years of Law & Order, why the F.B.I. or someone wouldn’t want to talk to someone in the Bin Laden family to maybe question them about the whereabouts of their cousin/nephew/son/whatever Osama.

And then, as usual, Moore loses focus right when things are getting good. He shifts the story to Flint Michigan and tries to shoehorn in the whole 9/11 situation with the citizens of that depressed city. I get why he always does this, but like several things in this pseudo documentary it’s really a stretch. So, what is the takeaway from this film? Bush and everyone who works for him are kind of shady, and Bush himself has, at times in his life, been in over his head. To any of us who don’t watch Fox News on a regular basis (or that live and breathe the air on this Earth), this isn’t really a surprise. And this is what pisses us off so badly. How can people–even people presented with Moore’s questionable facts–still vote for this man? Forget the shady dealings with Halliburton, the Saudi Royals, and The Carlyle Group, and his horrendous hijacking of religion and the state–the man wouldn’t be the smartest man in the room at a bull auction or a tractor pull.

How can a man with absolutely no aspiration to be president become the leader of the free world? How can a man that loved blow and booze and driving while on both become the most powerful man in the world? Actually, how can a guy not be able to get into University of Texas law school get into Harvard Business School? Moore should have done a movie on that. And they call my generation a bunch of slackers…