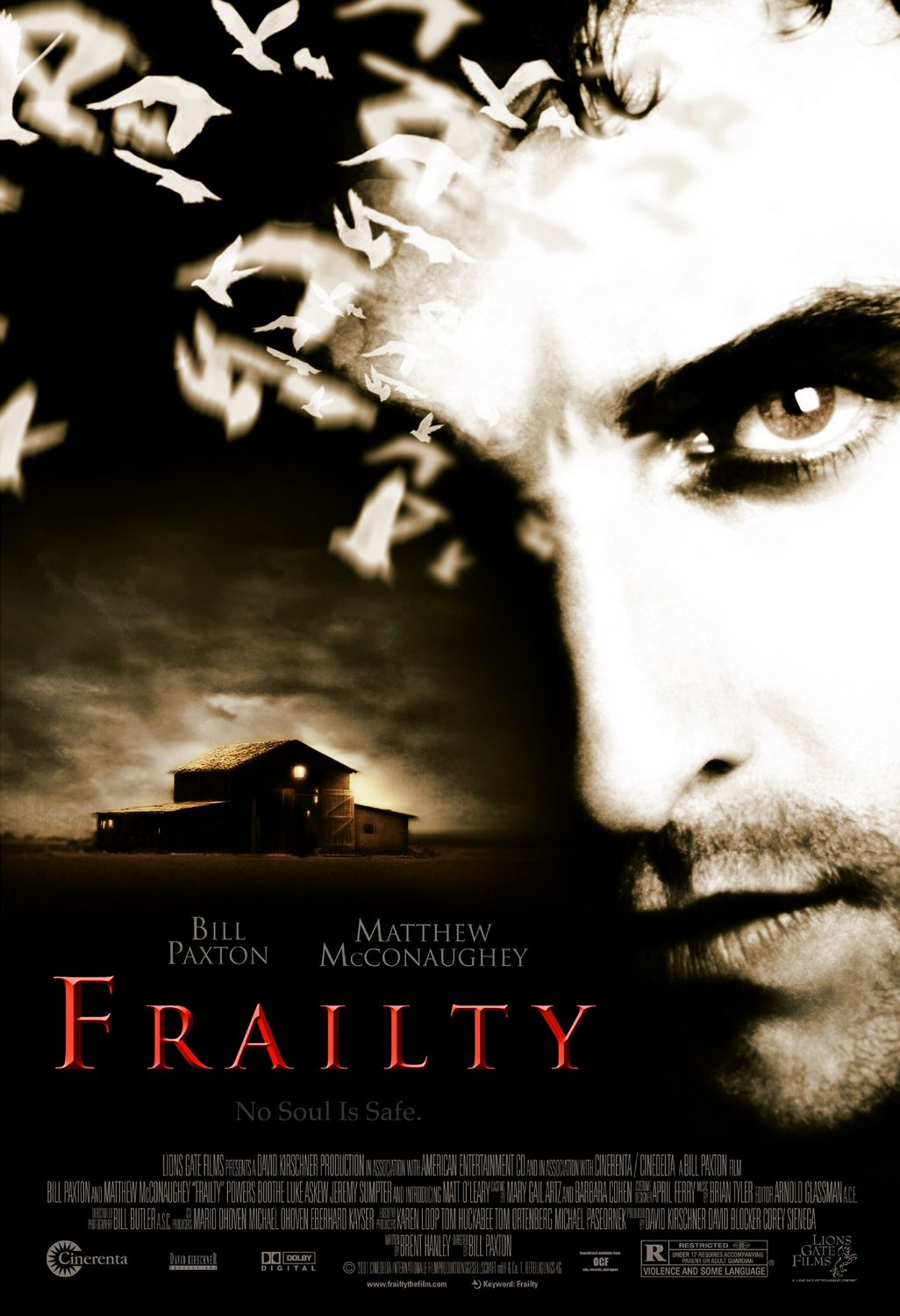 Good idea. Poor execution. It’s so sad when a movie that seems to have all the potential in the world goes down the tubes. From the first minute of the film, we know exactly where it’s going. We start to hear Fenton Meiks’ (Matthew McConaughey) tale of The God’s Hand killer and know immediately what’s going on. Of course, knowing that there’s this twist ending, I immediately start thinking about what the twist could be. It took about thirty seconds to figure this one out. Even when the “twist” does come at the end, it’s not overly impressive or even very clear. In fact, you wonder how this veteran FBI agent (Powers Boothe) doesn’t figure it out before it’s too late. Speaking of Powers Boothe’s character, Agent Wesley Doyle, there’s a scene that involved his character that is so absolutely ridiculous, that for me it ruined the entire movie. I wish I could mention the scene, but it would spoil the movie.

You know what? I’m gonna do it anyway: !!SPOLIER ALERT!! !!SPOILER ALERT!! I can’t believe that the agent’s sin is that he hacked his mother to death. I mean, the guy viciously killed his mother while she put the laundry out to dry! We have no idea why he did it. We have no idea about the guy at all. It just seems really weird and completely out of place. !!SPOILER OVER!! !!SPOILER OVER!!

Anyway, now that this huge complaint is out of the way, let’s get on with the rest of the weak shit. Bill Paxton can’t act. It’s a simple truth, and one that should be incredibly evident to anyone who has ever watched a movie. The guy was great in Weird Science. The guy was great in Aliens. The guy does not have the chops to do drama. Add in the fact most of his dialogue was written and delivered with a strange, awe-shucks kind of Andy Griffith-era twang, and it just seemed to have this first-time filmmaker, amateurish quality about it. Granted, this is Paxton’s directorial debut, and the screenwriter’s first produced screenplay, but…

The movie also suffers the same fate as a lot of high-concept films — it gets repetitive. Fenton tells the tale of his father to Agent Doyle. He tells him that his dad thought he was fighting on the side of God in the final battle before the apocalypse — killing demons hidden in the skins of human beings. There is a certain process he must follow to subdue, reveal and kill these demons. We get to see that process several times. It’s just not constructive. Just to prove a point: it’s just not constructive. Again, great idea, bad execution. Then there’s the weird floaty-head scene when Fenton is locked in the basement that is just mystifying. I guess I’ll chalk it up to first time director Bill Paxton’s love of the Doritos 3-D commercials with Frankie Muniz or something. Again, this was almost a crusher. It feels as though Paxton and the screenwriter were trying to force people to talk about the movie afterwards. I don’t mind movies that spawn organic discussion, but it seems like they stuck in items like the axe with OTIS carved in it (without ever explaining its significance) just to fuel speculation and spooky word of mouth. In fact, I’ve read people guessing at its meaning all over message boards. Some say it stands for Only The Innocent Survive. Others say it stands for Old Testament Isaac Story — a tale from which Frailty takes some of its direction. I’m more of the mind that it stands for Overly Touted Independent Schlock.

So I gave Frailty its two-and-a-half stars merely on its promise and attempt. There’s always some risk in making a movie about religious fervor and murder. I thought the fact that we are kept in the dark the entire movie as to whether or not Bill Paxton is crazy, or a true hand of God was good, but the end result was disappointing and felt kind of like a cop-out when it is finally revealed. The plot had some real potential in it, but what felt like a rushed ending and some major plot holes caused some serious confusion in the third act. I just wish Paxton had brought someone experienced in to take a look at this thing before he shot it. Maybe he he could have bolstered this saggy attempt.