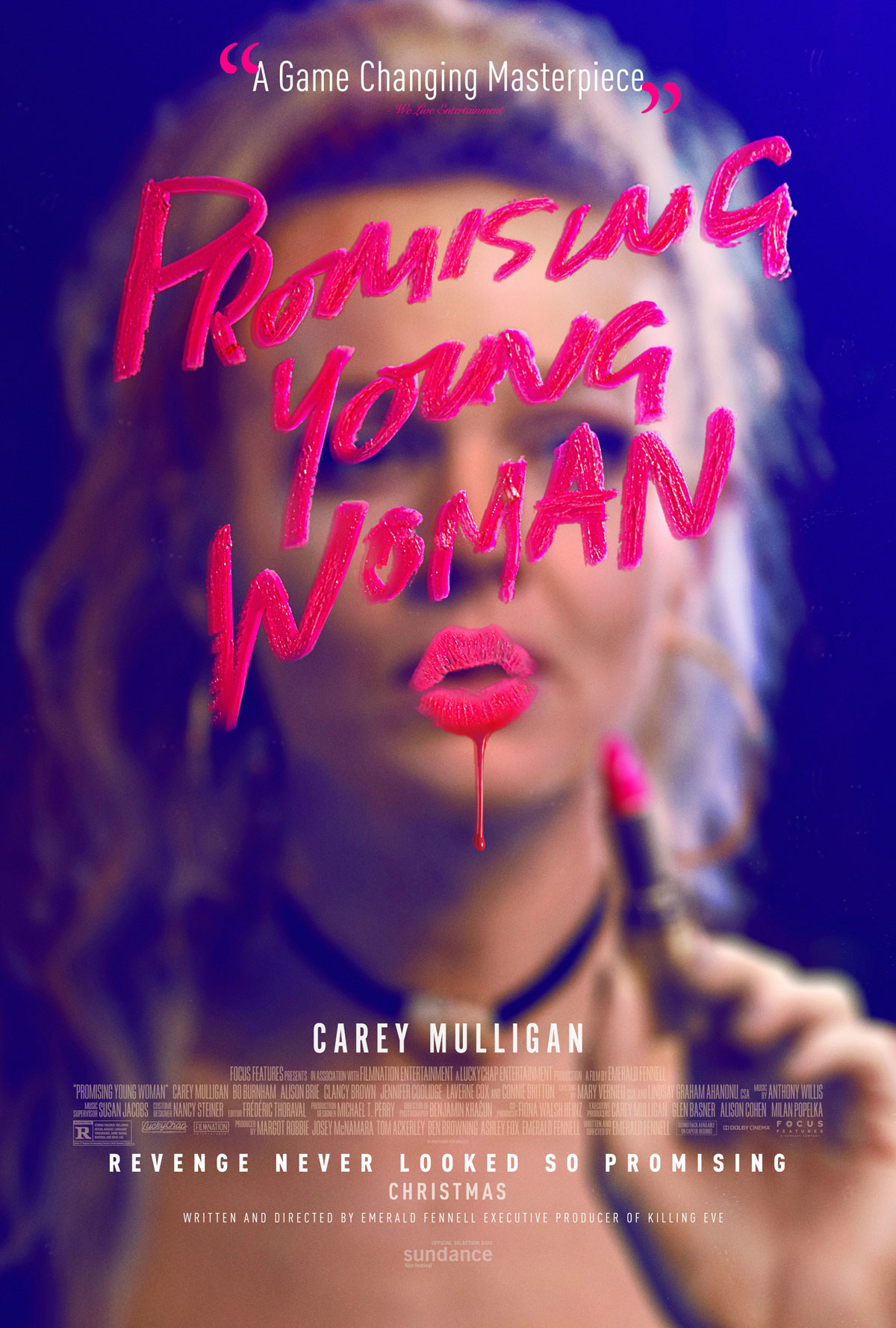 I think I may be a broken film watcher. While most people would watch Promising Young Woman and praise the subject matter or Carey Mulligan’s performance, I kept obsessing and getting distracted over the fact the film is supposed to take place in Ohio, but was clearly filmed in and around Los Angeles. The topography is all wrong! See? Broken. I also find that I’m too often a literalist. I know, for instance, that this is a “Me Too” revenge fantasy. But all I kept thinking the whole film is, “Man, are we really saying that every dude is a complete and utter creepy rapist?” Because I’ve been at many a bar over the years and seen many a falling-down-drunk woman and felt absolutely no compulsion to take her somewhere and molest her. Neither have my friends. I have no doubt that there are guys who would take advantage of this situation — obviously even one is one too many — but I would hope that the vast majority would actually be decent people… See? Way too literal.

And here is where we summarize the plot. There’s a young-ish woman, Cassie Thomas (Mulligan), who trolls bars alone pretending to be drunk. Her scheme, it seems, is to bait sleazy dudes into taking her home to take advantage of what they assume is a compromised woman. Her reprisal plan is unknown at first, but we know she’s doing it to teach them a lesson. We find out over time that Cassie was once a… promising young woman. She was in med school, but after her friend, Nina, was raped by a fellow classmate at a party and subsequently committed suicide, she dropped out. And now lives with her parents and works a minimum wage job at a coffee shop. So this whole fake-drunk-rapist-gotcha thing is some sort of reconciliation with the fact she wasn’t at the party and her inability to stop Nina from getting raped. Again the literalist in me rises and I think: seems a little on the nose and perhaps more of a script-y thing than something that makes sense in practice.

And I suppose it’s right there in the word “fantasy,” but the characters in this film are all kind of turned up to eleven. The stuck-up and complicit old classmate, Madison (Alison Brie), is like the hyper-real version of bored rich new mom. And what Cassie plans for her is super-fucked-up and, honestly, in reality had about a 1% chance of succeeding, despite it going flawlessly somehow. This is one of my other little issues with the film, as we only see her plans go swimmingly. Never when they don’t (at least until the very end). So we get this idea that she is like some sort of incredible evil genius, when nobody — no matter their intelligence — could have enough luck that everything they drew out went perfectly to plan. Especially when those plans seem, in some cases, to be very dependent on luck, coincidence and other people’s stupidity. It just feels like she plays on stereotypes, and those stereotypes always deliver. Nuance be damned. Also — and here’s my really shitty take — is it just me who is annoyed when they take a bunch of late-thirty-something actors and have them play a decade younger? Am I really to believe that Max Greenfield is even remotely 29 or 30? I mean, c’mon.

In direct contrast to Madison, there are other unrelated characters who were affected by Nina’s death. Mainly the accused rapist, Al’s (Christopher Lowell), lawyer played by Alfred Molina. Here the writers took it way the other way, making him a broken, repentant man. Presumably over this one case, where he bullied Nina into dropping the charges against his client. It seems extreme. I mean if this is what this dude did for a living, why this one case? And his weepy, masochistic rolling over for Cassie when she confronts him. It’s all a little much and feels discordant with the other male characters in the film. All of whom are either rapey, rapey-adjacent, shady hitman-types or, uh, Cassie’s dad, Stan (Clancy Brown). The scene with Molina is actually pretty interesting, as he is contrite and what we assume is genuinely repentant. And it’s up to Cassie whether or not to bestow forgiveness upon him… Which leads to the question: why is Cassie the arbiter of Nina’s legacy? Sure, they were friends. But even Nina’s mother essentially tells her to leave it alone and move on. So is Cassie doing this out of guilt? Or out of some sort of PTSD that has clearly compromised her judgement? I suppose we don’t really know, but for this situation to envelop her life in a such an unhealthy way, we as the audience have to ask how much is too much. I think?

That said, the acting is pretty great across the board. Side note: is it me, or is Molly Shannon absolutely everywhere? Mulligan is obviously terrific as she displays an underlying intelligence and psychosis that could have easily just gone all boil-the-bunny on us if left unchecked. This is really a vehicle for her to show some range and put her front and center without having to play off of a man. She is the star and she’s hard to look away from. She gets to do a lot, from depressed and mopey, to sharp and witty, to displaying some physicality. It’s all there for her and she kills it. Apparently everyone knows who Bo Burnham is — and I’d honestly been hearing his name a lot lately — but I was totally unfamiliar with the dude. And boy if he doesn’t play affable nice guy well. He’s funny and breezy and completely non-threatening, despite being like eight feet tall. And, to my earlier point, he’s the only real 30 year old in the cast. The casting overall is a stroke of genius, as a bunch of dudes play against type. I mean who would think Adam Brody would ever play anything but a total gentleman? He’s Seth Cohen fer god’s sake! So it’s shocking when these guys turn out to be the same douchenozzles as every other dude. Not my Seth!

Ultimately I was entertained by this film. But felt it stretched credulity at points. Which I suppose isn’t the point the filmmaker, Emerald Fennell, was trying to make. Or the path she was trying to follow. I just can’t get out of my head and enjoy things anymore. Or take the overarching message that films are trying to convey without nit-picking the methodology. I mean, I get this one. But I just wish that it felt a little more grounded and a little less like a parable or a fable or whatever we call the hyper reality of the moment. Also, she completely ruined Christopher Mintz-Plasse for me. Yuck.