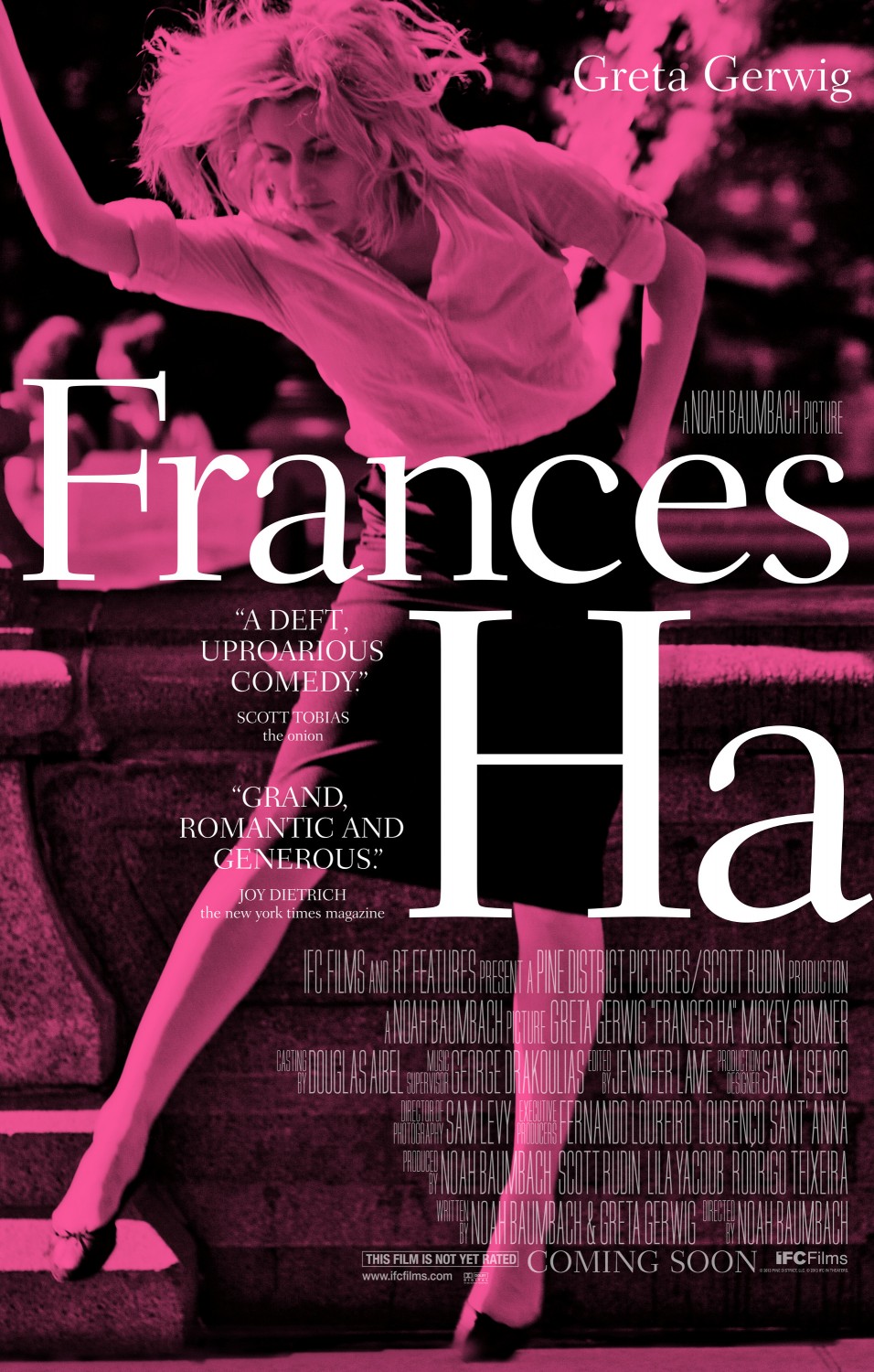 This is one of those stammery movies. If you’ve seen one, you know what I’m talking about. I weird mixture of scripted and unscripted moments that feel both realistic and unrealistic in their stilted, awkward dialogue that is interspersed with almost poetic dalliances. Typically revolving around a sad-sack or truly unexceptional in any way character who is thrust into the jaws of everyday life, we follow this person around as he or she tries to deal with the four big things in this universe: money, sex, love and work. At any given time at least one, and sometimes four, of those pillars is failing our protagonist. The thing that is different here — and something that Mrs. Hipster clued me in to after the film concluded — is friendship. Like true, unadulterated friendship between women. To me it felt more like love between Frances and her roommate, Sophie — a love that I thought at times might veer into sex — but my stupid ass was set straight by the Mrs. that this was one of the most honest and realistic portrayals of plutonic female friendship she’d seen in a movie maybe ever. Seriously, what do I know?

There is little to no plot in this film, which somehow is just fine. Even the character arc is relatively uncomplicated and, in the end, clean and very un-indie-like. I suppose an indie film these days that doesn’t end in an unexpected hail of bullets or some sort of otherwise gruesome or overwhelming death or personal tragedy is surprising. So watching Frances struggle with her dancing career and basically go back in time and then retrace the steps of her life, first going back home then back to college and finally back to New York, is less boring than it would otherwise be. Even though Baumbach literally picks the most boring places on earth, Sacramento and Poughkeepsie, to place his narrative. And though I can’t quite put my finger on what makes this less-than-compelling story compelling, I can say that without Greta Gerwig it would have been iffy. Her range, as was shown in another Baumbach movie, Greenberg, is about nil. She has one gear and she kind of rides it the whole film. It’s a weird amalgam of spacey, mumbly self-loathing and at times is irritating as hell. Seriously, you want to reach into the screen and shake her and ask her what the hell is wrong with her. I thought that it was Gerwig that annoyed me. After all, this was the second, and only, time I’d seen her in something (that I recall) and both characters left me with similar feelings of general irritation. But then, after thinking about it, I realize that she is, in fact, a really decent actress who has, though disappearing into her role, manipulated me to feel exactly what she and Baumbach wanted me to feel. I guess that’s what they call acting!

So, generally when you’re asked to watch a black and white film with no plot staring a woman who mumbles and shuffles and generally goes about infuriating you, you want to stay the hell away. But in the case of Frances Ha, it’s all these things that make it a pretty darn good film despite itself. [Netflix, MF]