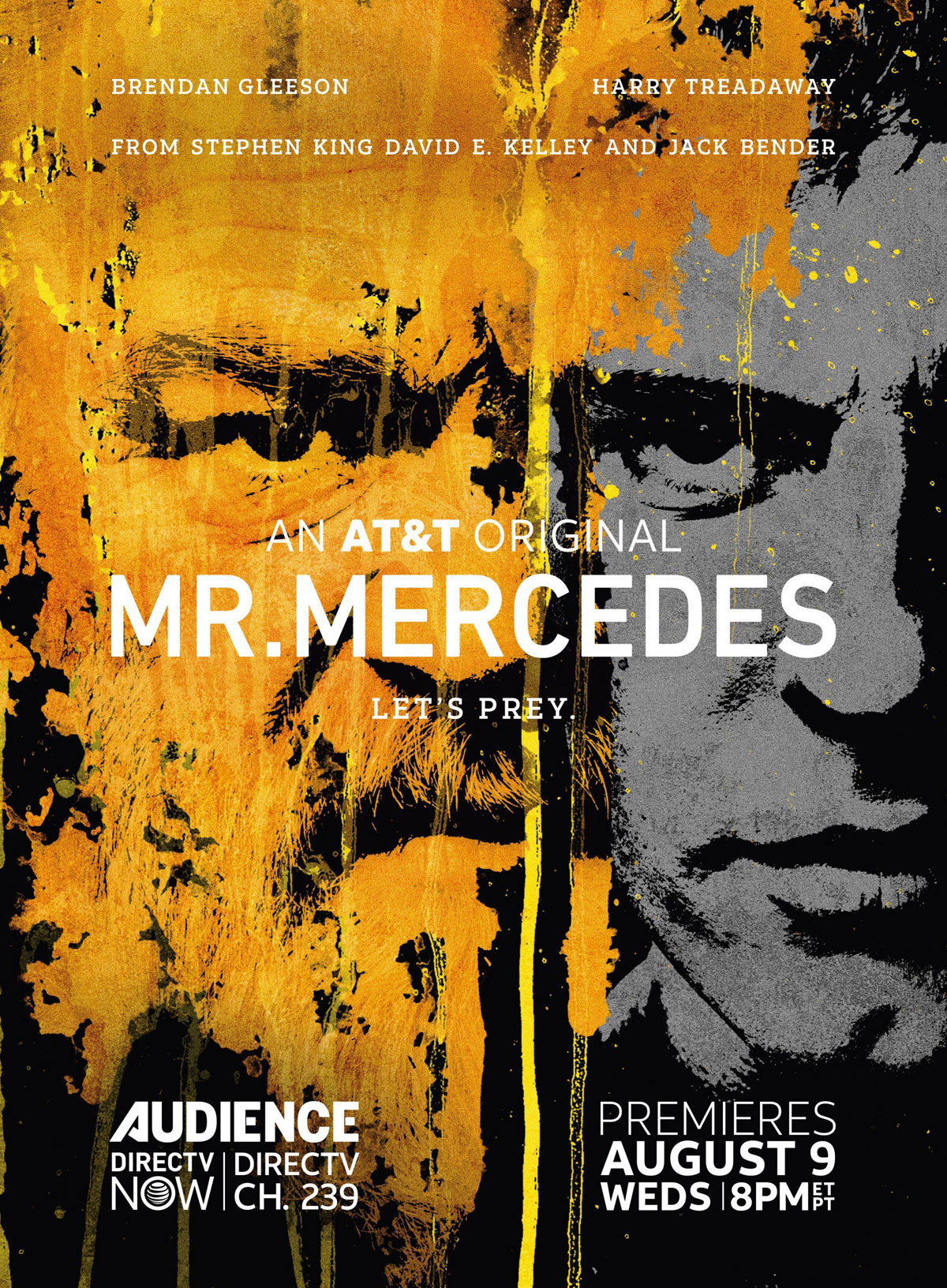 It seems that there’s Stephen King content everywhere you turn. Even on this weirdo Audience network, which is some sort of AT&T and Direct TV mashup Frankenstein of a thing. Honestly, I never would have known this show existed had I not been doing some research after watching the 90% amazing, The Outsider series on HBO. It turns out the Holly Gibney character on The Outsider (played excellently by Cynthia Erivo) originated in the Bill Hodges trilogy, of which Mr. Mercedes is the first book. So I was fascinated to see how the same quirky character was played in this series (by Succession’s Justine Lupe) versus the really interesting portrayal in The Outsider.

It turns out that Holly Gibney doesn’t show up right away. The series focuses on retired detective and current drunk, Bill Hodges (Brendan Gleeson). Makes sense considering it’s called the “Bill Hodges trilogy.” And while there are certainly elements of horror in the telling, this is clearly King’s attempt to tell more of a detective story. At least in the first season.

The setup here is that some psycho runs down a group of people waiting in line at a job fair in an unnamed Ohio town. He is obviously driving a… Mercedes! Yes, the nickname is very literal. Bill Hodges, late in his career, investigates the crime, but never solves it. In retirement a handful of years later, he is haunted by the crime and can’t seem to get past it. He’s ornery and slovenly and drinks constantly. It’s a pretty perfect part for Gleeson. And I’m really glad they didn’t ask him to try to cover up his Irish accent, as it’s lovely to listen to and automatically makes him a bit of an outsider in this stereotypical midwestern town.

The idea of a cop haunted by a past case that was never resolved is in no way original. In fact, it’s the plot of no less than two million films. The question is how the show’s creator, David E. Kelley, interprets King’s text and makes it unique in the telling. Of course they are somewhat limited by the original story, which I imagine plays a little better in the weirdo King print universe than it does played out loud. And that’s mostly because we tend not to question strange coincidences, questionable technology and character motivation when it’s in King’s world of horror and magic. But when you splash it on screen over ten episodes in what is supposed to be the real world devoid of underground clowns and the devil, those things unravel a bit.

The main issue is that, with the exception of Hodges, most of the characters come off a bit cartoonish. Mainly our antagonist, the psychotic and overtly disturbed young man, Brady Hartsfield (Harry Treadaway). I’m sure Treadaway is a lovely human being, but his acting (and his attempt to cover up a British accent) could be categorized as overly enthusiastic. And, yes, he’s supposed to be this computer hacker type who spends his days working as a Geek Squad dude in a sad Best Buy-like big box store and the other half of his day either torturing Hodges through his basement computer or getting handjobs from his equally creepy mom (Kelly Lynch). But watching him have to emote from behind a keyboard or just generally look terrible while moping in a retail outlet just isn’t terribly compelling or a great place to put an actor with not a lot to do. I read that Anton Yelchin was originally cast in the part, but he died tragically before filming started. Maybe that could have saved things…

On top of generally being turned off by one half of the cat and mouse duo, there’s just a lot of repetition and build up on our way to an obvious showdown. This guy, Hartsfield, isn’t necessarily exposed as the Mercedes killer right off the bat, but it’s pretty obvious that’s where it’s going. The strange part is why he — a young man with these unrealistic computer skills — kills a bunch of strangers by running them over with a car. They kinda-sorta voice that motivation by saying he wants to kill hope, but that’s a complete cop-out. And then kills more people with explosives. And poison. And mental games. And also drives an ice cream truck for some strange reason. The character just doesn’t make a whole lot of sense. The motivation and his psychological makeup are just kind of a mess. And this is the problem with too much exposure of these King antagonists when they’re not the devil or just some manifestation of evil. Sure, Brady is psychologically damaged by an incestuous relationship with his insane mother, but it just doesn’t tie when we’re trying to be in the real world.

And then Holly Gibney finally comes around. This Gibney is waaaaay less interesting than the one in The Outsider. Apparently the changes to her character were intentional in that series, but in this one she’s essentially played like your typical Hollywood character with Aspergers or some vague nod to the autism spectrum. I think they describe her as mentally disturbed or something, but it’s written and played as Aspergers, so we’ll go with that. And Lupe is fine in the roll. She’s socially awkward and bright, but detached. Like her counterpart in The Outsider, she is employed by Hodges’ character to solve the crime because she is bizarrely smart about all sorts of things, including computers. In turn she partners with the kid who cuts Hodges’ lawn, Jerome (Jharrel Jerome), who also happens to be great with computers and is on his way to Harvard in the fall. It’s the dynamic of the old crotchety guy and the young people thing that is always fun. It works for the most part, but it ultimately seems that the two young people are better detectives than the old dude who was actually a detective.

Everything builds to a head and there’s the showdown we expect and it’s all fine. Though the way Hartsfield is finally subdued is so bonkers dumb, it’s laughable. And, apparently, the object that’s used to bring him down is different than the book, because even King would have found this version ridiculous. There’s some disturbing stuff along the way (especially the weirdo incest stuff), but it plays out in pretty typical fashion. The season itself feels self-contained. We have an arc for our main characters, things are wrapped up and it ends. It wasn’t the best thing ever, but fans of King and detective stuff might enjoy portions of it.

But then there are two more seasons (at least). I tried season two and it was excruciatingly bad. I imagine some of it is taken from one of the books in the trilogy, but I have a hard time believing even King would torture us with such shit. I consider myself a pretty resilient television viewer. Or a stubborn one. I rarely give upon stuff. But season two is literally Hartsfield in a coma in a hospital bed somehow using an app to control people’s minds to do bad stuff against his enemies. While there is an argument between hospital officials and some vague drug manufacturer to keep him alive and in this hospital at which weird things keep happening. At this point we’ve gone completely off course and have left the real world for the dumbest of King magic. Magic that they try to justify through “science.” But only kind of. They yada-yada some drug trials and cerebral cortex and stuff that gives Brady the ability to essentially be a god, but it’s nonsense. This all while we watch Hodges and Gibney fight about their new business tracking down deadbeats who have missed car payments or child support. It’s like they set out to bore the shit out of us. And they succeeded. So there will be no season two or three reviews from me.

This is way more than I ever intended to write about this show. Considering that there is probably one other person in the world who has seen it or even has access to see it. But maybe think about watching season one if you’re a Gleeson and King fan. Or really want to see the mom from Two and Half Men as Gleeson’s horny neighbor. But if you’re tuning in expecting Broadchurch or even The Sinner, you’re going to come away disappointed. But if you go in with the understanding that all King material has an element of camp to it and treat it as such, you’ll be just fine running it in the background and calling it a day.