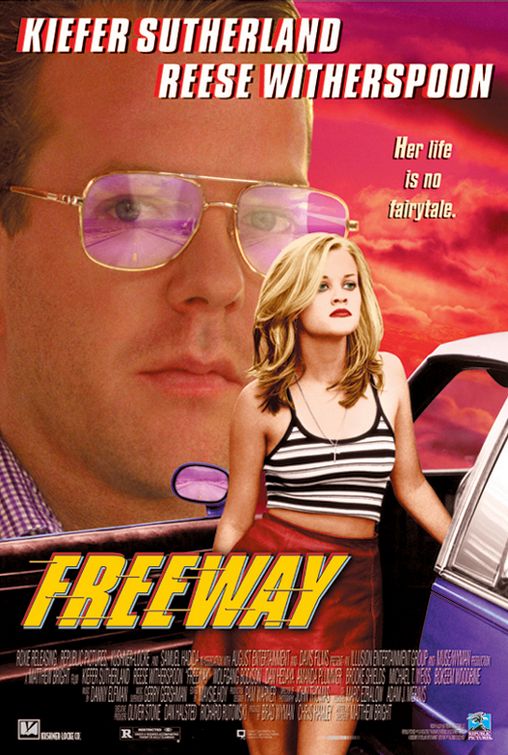 I think it’s officially time to declare Kiefer Sutherland’s career a disaster. In this 90’s retelling of Little Red Riding Hood, Kiefer is so bad I want to go to his fuckin’ house and blow it right the hell down. Amazingly, Kiefer doesn’t turn in the worst performance of the film — that honor is left to the Amazonian Brooke Shields. Kiefer plays a character named Bob Wolverton (how subtle) who is a good guy by day, but a serial rapist on his off time. He basically picks up hitchhiking chicks or women in distress on the side of the highway and rapes them in his car.

Little did he know he’d run into fifteen-year-old Reese Witherspoon, who is escaping a life where her mom and stepfather were just thrown in jail for various drug and abuse charges, among others. She is (surprise) on a mission to go see her grandmother (who lives in a trailer, not a house). She’s a tough girl (to say the least) and doesn’t take crap from anyone. So Bob picks her up after her car breaks down on the highway, tries to rape her and she shoots him through the face. She then escapes to Mexico, becomes a hooker and gets arrested. Lots more crap happens, and all of it is relatively disturbing and gross.

In no particular order: Witherspoon has a lesbian experience in jail with a suicidal insomniac, Bob smokes a cigarette through a tracheotomy hole in his neck, Witherspoon kicks a security guard in the crotch and beats somebody to death with a food tray, Bob ends up looking like a horrible freak after being shot and drools a lot. So, here’s this violent, emotionless girl who shoots a seemingly innocent guy in the face while robbing him — or at least this is the story that Bob and his girlfriend (Brooke Shields) tell the police after his little incident. Eventually, Witherspoon is brought in to face the music at a trial, while the state charges her with attempted murder and a host of other things, with nobody realizing that Bob is in fact the I-5 killer everyone has been looking for.

Meanwhile, Shields overacts horribly and Sutherland looks so ridiculous with his scary makeup, it’s a wonder anybody can get through this movie. The only bright spot is Witherspoon, who certainly acts over-the-top, but is somehow compelling as this completely unlikable sociopath. Once again, the screenwriter cannot end the movie without gunplay (see reviews of Hurricane Streets and Lawn Dogs) and completely ruins what was already a pretty shitty movie with one of the worst endings of all time. Okay, maybe not the worst, but to give you an idea: there is a freeze shot at the end in which you get to see how truly freaky looking Reese Witherspoon is. So, this film is basically a piece of crap, but I’m sure some reviewers out there (Ebert included) will try to make it into something it’s not: clever and deep.