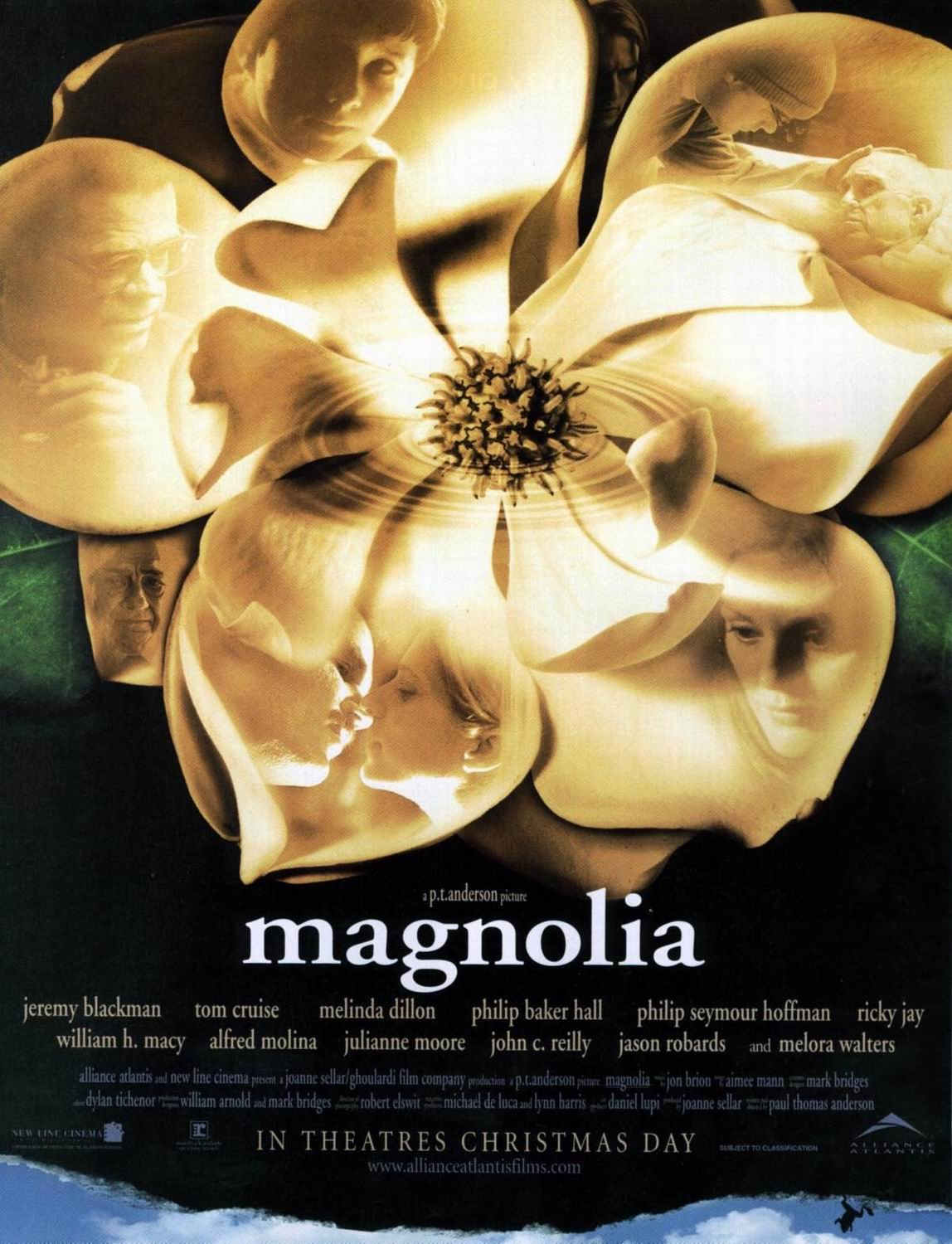 From its first beat, Magnolia is a complex work of both glorious fantasy and stupefying reality. Harry Nilsson’s “One,” covered perfectly by Aimee Mann rings that first bell and allows us to enter a world that is somehow tragic in its comedy and awkwardly touching in its tragedy. Paul Thomas Anderson is not exactly known for his coyness when it comes to tackling both subjects and running times. Magnolia is no exception. It’s as if he watched the mess that was Robert Altman’s Short Cuts and twisted and bent it until it was moving, searing and confounding.

While Altman tried to take several brilliant short stories written by Raymond Carver and paste them together to make something we care about, Andersen used the same slice of life technique to create character arcs that actually made sense and kept me glued to my screen. Despite his prolific (and we do mean prolific) use of the word ‘fuck,’ Andersen can bang out a script that is somehow cool and engaging all at the same time. Something like Pulp Fiction was just plain cool, but really avoided entering the mind of its characters. On Golden Pond (I don’t know) was moving and genuine, but was about as cool as having enflamed hemorrhoids on a horseback ride. PT Anderson himself is a passionate, egotistical ball of nerves. His screenplays reflect this passion and this ego. Only he would dare to try to pull off some of these scenes. Only he could pull off some of these scenes.

There’s so much to cover in this film, I don’t even know where to start. The theme throughout is the effect of loneliness on the human spirit. People can have everything and be lonely. People can have nothing and be lonely. What do they really need? Each other, of course. That’s why, as the song says, “One is the loneliest number.” This group of lonely people live their lives in the San Fernando Valley looking for something. They don’t know what, but they know it’s out there. Infidelity, drug abuse, child abuse, parent abuse, theft and a bunch of other issues bring all the characters together in what the film maker purports to be not coincidence, but fate. This idea is set up on the beginning of the film by showing some of America’s favorite urban myths that involve things can only seem like incredible coincidence. Everyone is tied together by frogs. I can’t explain, but you’ll see.

The film itself is beautiful and shot with incredible attention. Anderson gets some great performances out of his actors as well. Jason Robards is amazing. I couldn’t believe how terrible he looked as Julianne Moore’s dying husband. I watched the DVD extras and realized only then that Robards had just gotten out of the hospital after almost dying in real life. Cruise was also at his best as the egomaniacal pussy-monger, Frank T.J. Mackey. His bravado is everything that John C. Reilly’s performance wasn’t. Reilly is an underrated actor that seems to do his best, and only, work for Anderson. He is so believable as the shy, sad sack cop that you just want to reach out and hug the guy. Macy plays one of those pathetic characters that makes you shout, “Idiot, what the fuck are you doing!?” at the screen. I’m sure the role was written with him in mind. After all, who plays pathetic better than Macy? I realize this won’t be everyone’s cup of tea, but I recommend renting it after a few cups of coffee and some mind expansion exercises.