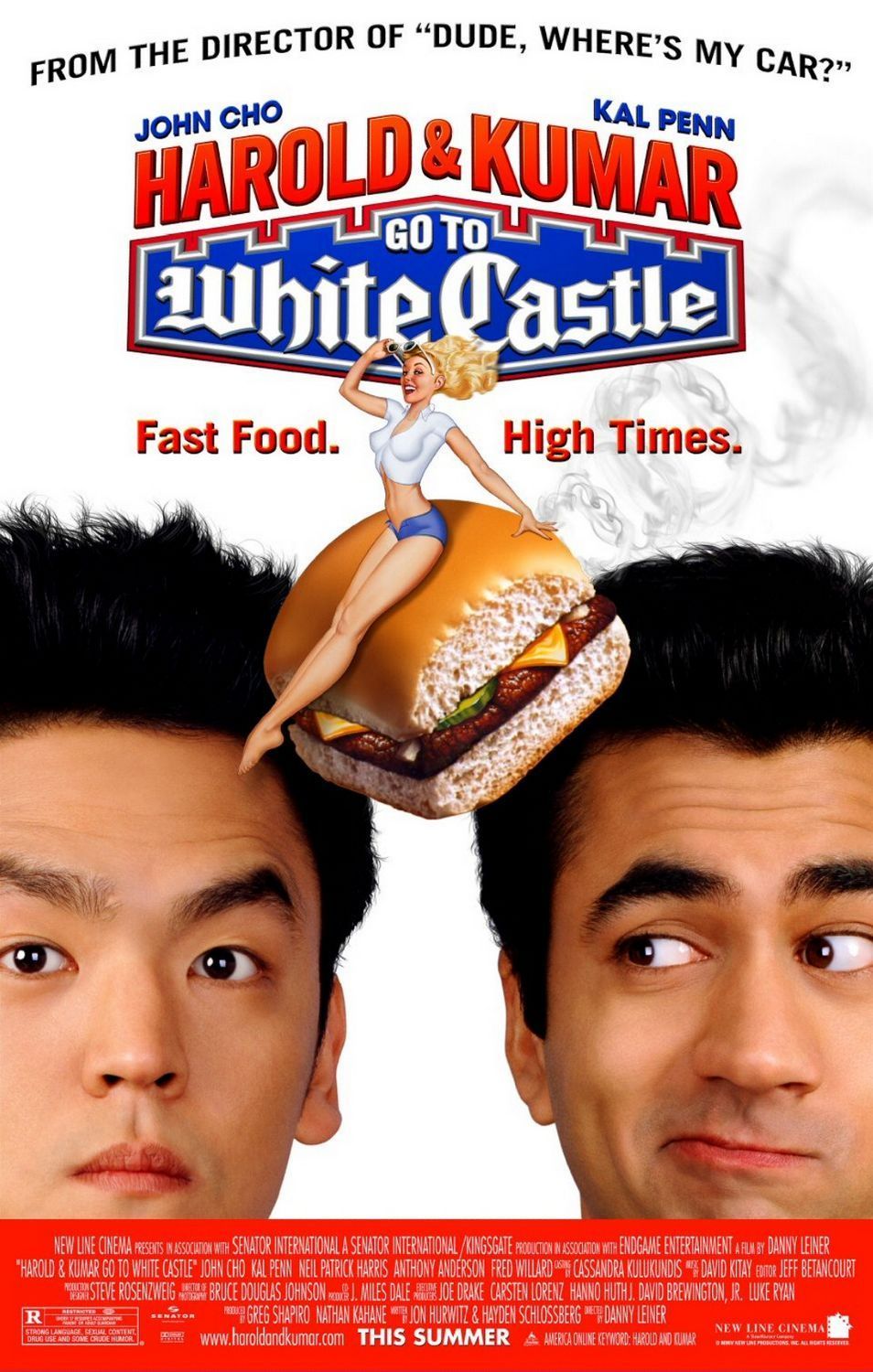 Let’s not pretend this is going to be The Godfather. Shit, let’s not pretend this thing is gonna be Dude Where’s My Car (even though they share the same director). Never before in the annals of moviedom has so stupid and base of a concept made it to the silver screen. Oh, wait, that’s a big, fat lie. Two young guys getting stoned and going on an adventure to find a White Castle sounds like a positively brilliant and complex plot compared to almost every single movie Jennifer Lopez and Sandra Bullock have been in over the past seven years. It’s also nice to see one of these movies not starring that Seann William Whatever asshole. In fact, casting two non-Caucasians in a raunchy comedy (especially one about stoner buds) is a very cool and open-minded decision on someone’s part somewhere.

The setup is typical, with one guy playing the straight man (in this case the Korean guy, Harold) with the wild, rebellious Indian guy with the perfect MCAT scores, Kumar, playing the wacky troublemaker. It’s your usual game of one guy being worried about getting his work done while the other just wants to party, get laid and go to White Castle. Ultimately the stiff, wimpy guy is gradually put in positions to assert himself, until he gets to the final showdown at the end where he completely breaks out of his shell, and surprises everyone, including himself. The stoner, slacker is so impressed by his friend’s assertiveness that he decides to give up being stoner (sort of) and take his life seriously. And there’s your plot.

In between all the high learning stuff, the guys are attacked by a rabid raccoon and a bunch of extreme sports bullies. They witness a couple British chicks at Princeton fart a lot, get arrested, ride a real Jaguar and have their car stolen by Doogie Howser. There’s not a whole lot to this movie (no surprise there), but there are some laughs. There are a few belly laughs and some chuckles and a couple small snorts, but they could have taken some of the stuff further and really hit it out of the park.

One thing I’m not sure is supposed to be funny, but is, happens when Harold and Kumar happen to end up at the hospital where Kumar’s father and brother work (somehow he doesn’t realize this when they go there), and they run into the two of them. While Kumar’s father is a very dark-skinned, his brother (although played by a part-Indian comedian) looks like a Caucasian guy with some weak self-tanning lotion on his face. Later, while the guys are searching the hospital for some medical marijuana–and wearing surgical masks–Kumar is mistaken for his brother, despite looking absolutely nothing like him. I don’t know, it struck me as kinda funny, but may have been completely unintentional. Or a completely intentional commentary on the fact dumb white people think all minorities look alike?

Anyway, if you have a subscription to one of those DVD mailing services, this one can definitely amuse you for a couple hours, but if you’re looking for anything deeper than a thimble of water, you might want to smoke some of the good stuff and listen to the first track of Maggot Brain a couple dozen times.