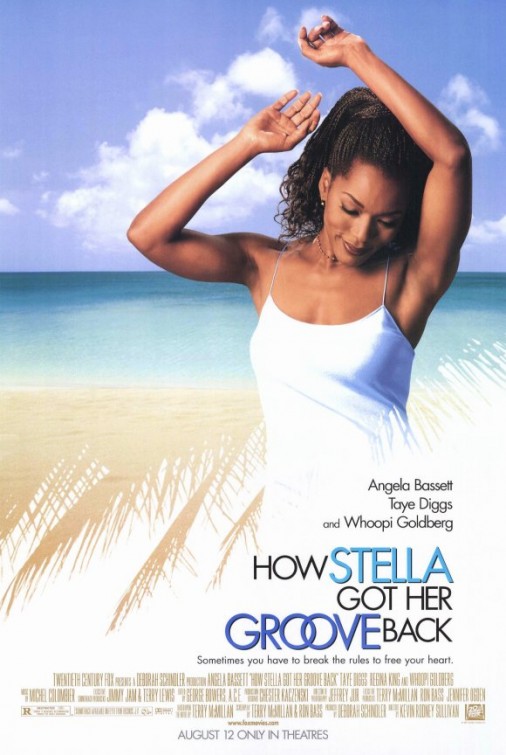 How Stella Got Her Groove Back

Looking at the movie’s tagline, the only rule this boring-ass flick broke was the “keep crappy movies under an hour and a half” rule. The actual rule to which the tagline refers is the rule that older divorced women shouldn’t be allowed to have fun dating young Jamaican studs. And this is the plot device on which the entire movie sits. Over two hours of, “I’m too old for you. . .you’re too young for me!” Ugh, such lame drivel.

Anyway, so there’s this 40-something woman (Angela Bassett) who is divorced, with a pre-teen son and a hectic workaholic lifestyle. She never takes a break from her high-powered job and basically can’t get away for a date. Of course, she has a wisecracking best friend (Whoopi Goldberg) who convinces her to take a vacation in Jamaica, to get away from all the stress of the real world. After a bunch of waffling, she decides to go. Blah, blah, blah, she meets a young guy who is attracted to her (Taye Diggs) and she to him. She soon finds out he is 21 (or something like that) and immediately discounts him as too young, despite the fact she really wants to jump in bed with him. So she jumps in bed with him anyway.

Oh, did we mention his name: Winston Shakespeare! Anyway, they have a nice time, until it’s time for her to go home. There’s a bunch of “you used me” kind of stuff, etc. So she goes home, leaving Winston to wash dishes at the Jamaican resort. He ends up calling her, coming to visit, and moves in with her and her son. Bad stuff happens to her at work, everybody makes a huge deal about her dating this young guy (especially her) and the whole thing goes on and on. There are the typical, “oh, what would you and your mother like to eat?” and “I see you brought your son to the movies”. The plot also throws in a bunch of stuff about Bassett paying too much attention to her new beau and forgetting about her true friends and family. She is only reminded when they all start dying.

So, the message at the beginning of the movie is, “you’re not having enough fun”, and then it becomes “you’re having too much fun” and just to get even with you, we’re going to kill off a bunch of people. Of course, the dying stuff is probably just a cheap attempt by the screenwriter (or author as the case may be) to get the movie’s mostly female audience to shed a tear. (You know, get women coming out of the theater to say, “I laughed, I cried, I wanted to do Taye Diggs — he has such nice abs!”) First, Bassett looks younger than she is, Diggs looks older than he is supposed to be, so what’s the big deal? The whole thing is just seriously annoying.

Diggs puts on a really bad Jamaican accent throughout the movie and does a lot(!) of smiling. I think the director, Kevin Rodney Sullivan, had some sort of infatuation with Diggs and told him mostly to shut up and look pretty. Sullivan really hasn’t done shit as far as directing goes (although he did play some really minor extra roles in some horrible movies) and obviously has no sense of pace or editing. The movie drags on and on until you seriously wish Diggs and Bassett would just die in a fiery wreck and get it over with. I honestly have no idea why I wasted over two hours of my life watching this abomination, but I can say that Terry McMillan has moved to the top of my list of worst authors of all time (She also wrote Waiting to Exhale). Of course, if you’re having trouble sleeping, or are thinking of checking out of this life, I heartily suggest this waste.