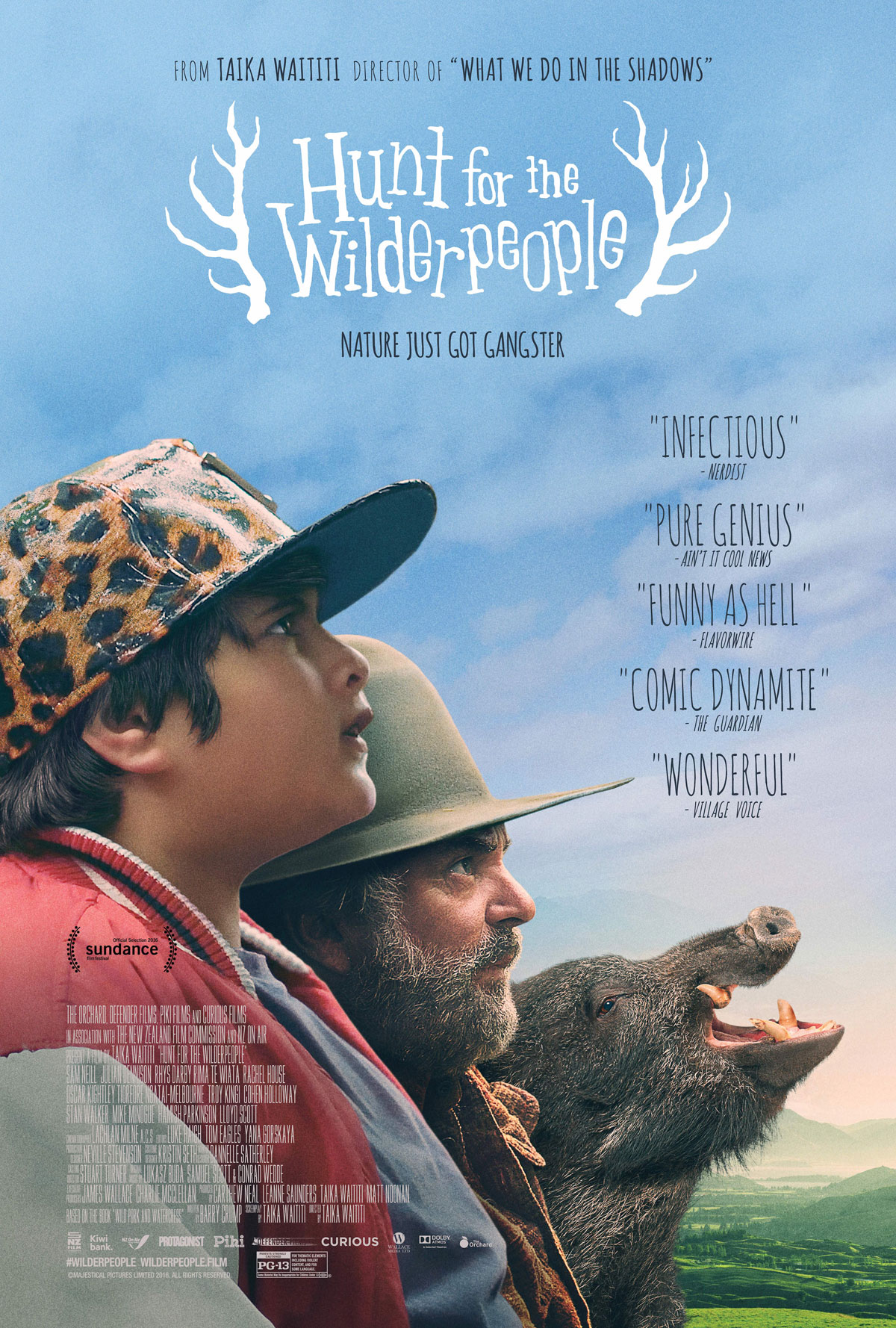 Hunt for the Wilderpeople

There’s no denying that Taika Waititi is a funny dude. But he’s also good at the heartfelt stuff. The traditional and the modern. His is a unique voice in that way. He can take a very classic story like Hunt for the Wilderpeople and inject it with just enough pop culture and edge without veering away from the ultimately sweet outsider story at its core. And, after watching this film and Jojo Rabbit, it’s clear he is incredibly perceptive and good at writing kids. Perhaps it’s his childlike outlook. Or his feeling of being an outsider himself. I haven’t the slightest, but the man is good.

The plot here is pretty basic. You have this kid, Ricky Baker (Julian Dennison), who has bounced around from foster home to foster home. I’m not sure what foster care is like in New Zealand cities, but apparently they can be just as rough as any other big city around the world. Ricky is a lost twelve-alomost-thirteen-year-old, aimless, alone and looking to idols like Tupac Shakur for inspiration. It seems he spends most of his time running away and breaking and burning things. Out of options, child services brings him out into the countryside to live with an older, childless couple, Bella (Rima Te Wiata) and Hec (Sam Neill). She is a sweet woman who just wants to make a home for this boy, but Hec is a cantankerous dude who just loves to wander around the bush and do chores on the farm. He tolerates his wife’s desire to have Ricky as a companion, but does little to interact with him. Until, one day, he’s forced to. And this is where we shift into the typical old-crank-guy-set-in-his-ways-has-to-make-friends-with-a-chatty-child plot. It’s instantaneously funny, but not necessarily original. But, that’s fine.

The funny thing is, Dennison blows straight-man Neill out of the water. That kid is a fucking trip. He’s funny as hell in Deadpool 2, but this is really his star turn. It’s his movie. And his ironic swagger and wannabe hood character is just terrific. Because, of course, he’s just a child looking for a little direction and a little love. So when his new mom writes a little birthday tune for him on her keyboard, he joins right in on the song and you can just see the joy on his face because someone took the time to engage. Tupac’s dead, but Bella is writing music about him!

They eventually move the action to the road. Or the bush, I suppose. A place where Hec feels really at home and Ricky is, once again, a fish out of water. It’s a road adventure movie at this point, as the two “outlaws” go on the run. That setup is a little dubious, as it feels like Hec could have just explained the situation, but he’s supposed to be a bit of separatist, non-government-trusting crank anyway, so we’ll let that one go. The situation isn’t exactly the same, but the result and ensuing relationship definitely feels like it borrowed a bit from the 1993 Clint Eastwood directed film, A Perfect World. That film is obviously more dramatic than this one, but there are a bunch of parallels. Boy learns from man about life. Man learns from boy about being more human. It’s a classic.

Ultimately this comes down to the small bits. It’s a two-person stage play set in the New Zealand forest. If you like the characters and the actors, and the way they interact, then you’re in. And, in this case, we have the very raw, but very engaging Ricky Baker and an incredibly experienced Hec. And Waititi knows what he has in each, leans into their strengths and comes out on the other side with a small-ish film that feels really good. It’s a little bit of a fairy tale, but in the case of the Wilderpeople, that certainly works for me.