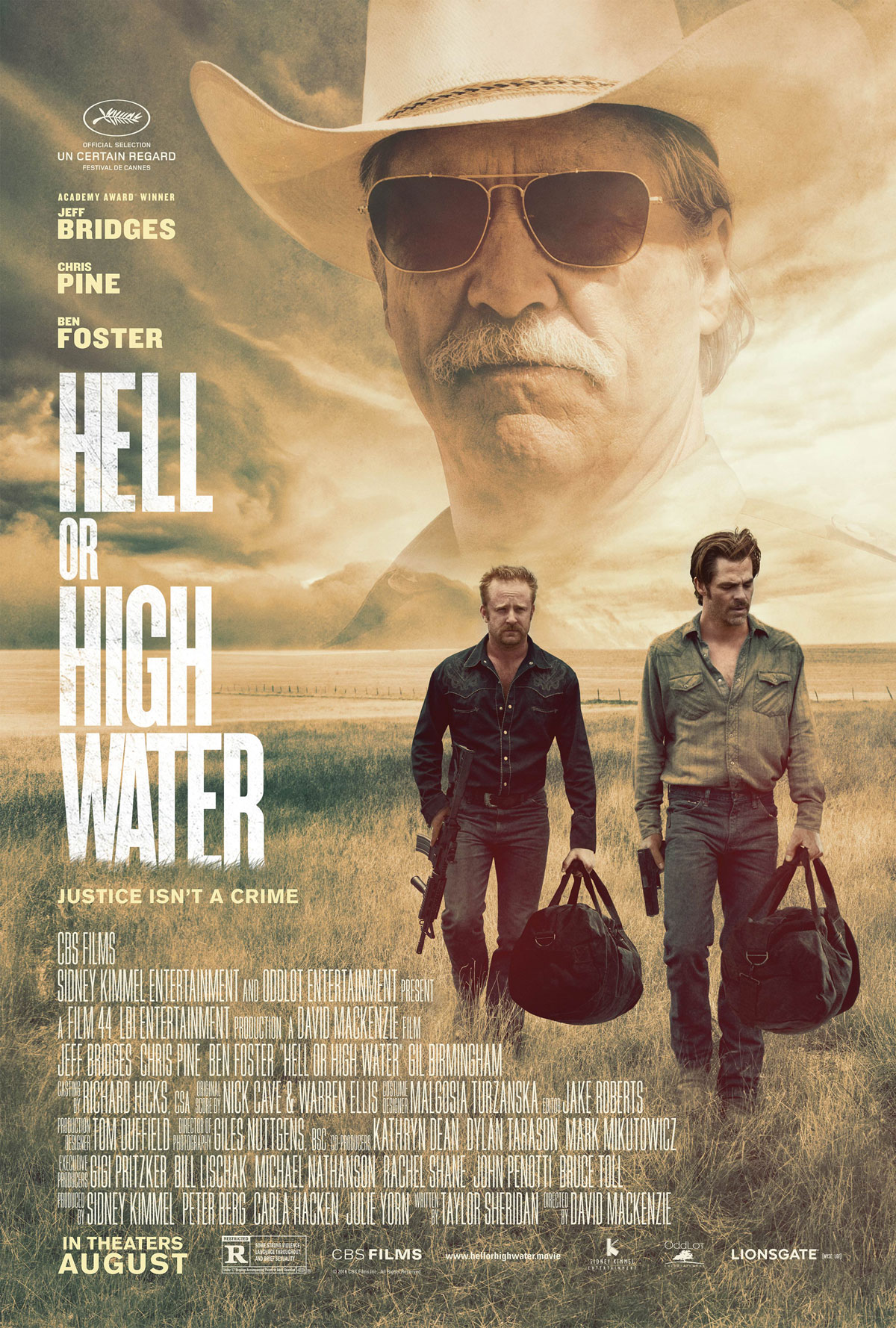 Remember back in the day when all indie movies were about small crimes? Like every single film involved someone heisting or robbing or generally shooting something up? And the cast was small. And the stakes were small. And the movie itself was kind of quiet around the edges, save the scenes of the aforementioned shooting and robbing? Well, in that sense, this is a throwback to the days of yore. If yore was like the 90s and early 2000s.

In these films there also always seemed to be a law enforcement individual on the verge of retirement. A guy unsure or unwilling to go gentle into that fare night. He’s ostensibly the good guy. On the other side you usually have a duo of law-breakers; one crazy, the other driven by something personal and rational. The latter is usually the true foe of the law man because they are more alike than different. The former is usually just batshit nuts or has a death wish that at its heart is true. This outline about encapsulates Hell or High Water and its three main characters.

The law man on the verge of retirement is played by Jeff Bridges. He mumbles and scrapes through the whole film. He’s pretty outwardly racist to his younger half-Native American, half-Hispanic partner. But it’s out of love. He’s a dogged Texas Ranger just looking to get to the bottom of these low-stakes bank robberies happening in these small, sleepy Texas towns. The crazy dude in the bank-robbing, brother duo is played by Ben Foster. I never ever remember who he is, and more likely than not will confuse him with Giovanni Ribisi or Danny Masterson. With a gun to my head I would swear all three of them are the same person. He’s the angry brother who has spent a good deal of his adult life in prison for robbery, assault and any number of other things. Playing his brother is Chris Pine, who is way too good looking to play this part. There is some indication that women find him attractive (a waitress and a woman in a casino seem to pay attention to him), but otherwise he’s just some out-of-work Texan who lives on a foreclosed ranch in the middle of nowhere. And it’s that ranch that he’s trying to save when he partners with his criminal brother to rob these banks.

The plot is that simple. The mom of the two brothers took out a reverse mortgage on their family ranch (which is worth almost nothing anyway) and died owing back taxes and the deed to the bank. The only way to save the thing is to essentially buy back the deed from the bank and pay them back for the back taxes they’d been covering in a certain amount of time or forfeit the property. That’s it. (I think that’s the same plot as Breakin’ 2: Electric Boogaloo.) The motivation for Pine’s character to save the ranch is so he can pass it on to his two teenage sons, who live with his ex-wife in another town. Because he knows they’ve found oil under the property. He grew up poor and remained poor through his adult life and wanted a different life for his kids. Makes sense.

Like the classic movies in this genre (think Blood Simple or the underrated Eastwood/Costner not-quite-classic, A Perfect World) the thing is really about the quiet moments. The inter-personal moments where we learn what makes the characters tick. What are they willing to fight for? What are they willing to die for? Why are they always low-talking and mumbling in thick Texas accents — beside the fact they’re playing Texans? Of course, Bridges and Pine, and his absolutely monstrous head, are from LA. And Foster is a Jewish kid from Boston. So, I have no idea if their accents are authentic in the slightest, but they are certainly deep, guttural and down-home. And, in parts, pretty hard to understand. The whole narrative, like their slow, Texas drawls, takes its time. Despite there being a timer on them, there is no need to smash in a bunch of details and overcomplicate the caper, as it, like our characters, is pretty simple. There certainly is some social commentary in there about how banks take advantage of poor people and essentially leverage small, rural communities to their eyeballs, but it’s only there if you want to engage with it. Or you can just sit back and watch things unfold at their own pace.

Is it going to light your eyebrows on fire? Nope. Is it going to tear the roof off with huge performances or insane set pieces? Not that either. But it certainly adds to this neo-Western canon that owes a lot to the open plains and bent grasses of the small-town West that can be just as gritty as anything, but in a way more subtle, languid kind of way.