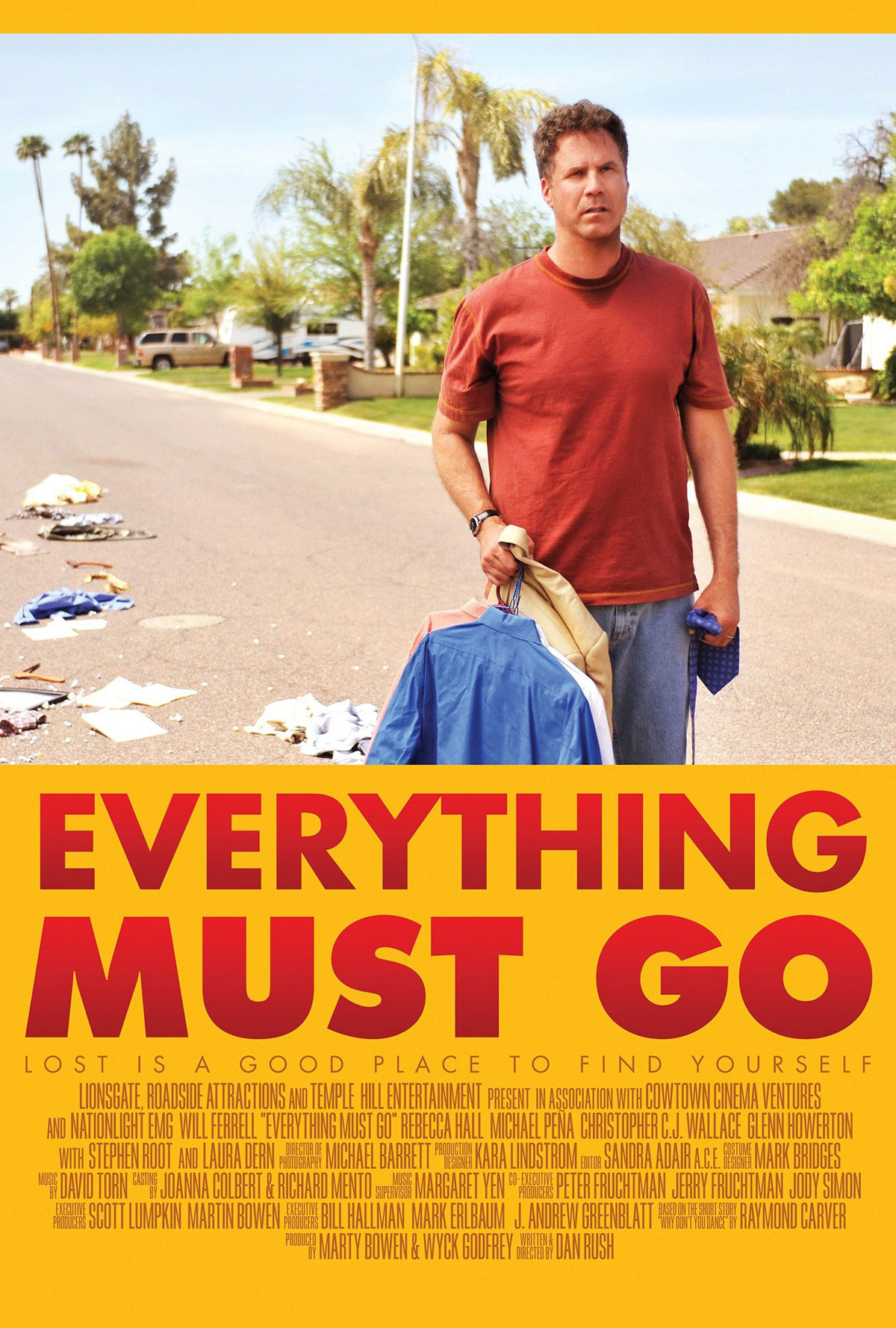 There is a certain feel to Raymond Carver short stories that are specifically him. It’s not a feeling that you necessarily crave, however. It’s real sad. So you kind of know going in that Everything Must Go — based on the Carver short story, Why Don’t You Dance? — isn’t going to be a Will Ferrell laughfest. Yes, this is one of Ferrell’s “one for me” movies, I guess. You know the ones: sad-sack Will, on screen 100% of the film, “acting” and showing heart. It’s a good lane for him, quite honestly, although this particular film is a little too simple in its approach to give the weight he was probably looking for.

Nicholas Halsey (Ferrell) is a drunk. And he’s just used up his last pass at work, and with his wife. So, in the same day he gets fired and comes home to all of his stuff put out on the lawn of his locked and abandoned house. Now, how his wife managed to get what amounts to a ton of stuff (even with some help, which is implied) out on the grass and change all the locks in the time it took him to drive to work, get fired and come home is a little questionable, but I’ll let it go. Anyhow, from the sound of it, Nick was decent at his job when he wasn’t [maybe] sexually harassing co-workers, falling off the wagon or going on leave to try to dry out. We don’t really get a sense of what kind of husband he is, but assume all the drunkenness, cheating and apparently collecting all sorts of weird, unnecessary material crap probably wasn’t doing it for his wife.

A wife who, in addition to throwing his shit outside in the Arizona heat, freezes his bank account and cell phone service. Leaving him homeless, penniless and without means of communication. Which seems pretty extreme and cruel regardless of how she was currently feeling about him. And, based on the conclusion of the film, not really something that she would probably do? Also, it’s a little unclear why Nick doesn’t just break a window and let himself inside his house, but I suppose it’s all in service of the larger buddhist story about letting go, and I shouldn’t nitpick timelines and plot points.

Nick buys a bunch of PBR with what little money he has, sits in a lounge chair on his lawn and proceeds to just wallow. Until an awkward neighborhood teenager, Kenny, whose mother has essentially left him on his own, comes by and befriends him. And his friend and sponsor, Frank (Michael Peña), comes by in his capacity as a police detective to tell him that by law he has five days to hang out if he pretends it’s a yard sale. But then he has to get his shit off the grass, get his act together and try to move on. Frankly, Frank isn’t a very good sponsor. In fact, he’s a super-shitty one.

Between Kenny and his new across-the-street neighbor, Samantha (Rebecca Hall), Nick starts to soften on the idea of making a clean break from his life. He even decides that, shit, maybe he’ll even sell some of his stuff! The movie obviously deals with some themes about the shallowness of consumerism (Nick was a man in the business of selling things to people) and the importance of human connection. Putting aside the superfluous and focusing on what makes you happy and fulfilled. You can tell because Nick has a koi pond in his backyard and his wife likes soothing Asian music and Nick eats Chinese food. So, yeah, Eastern philosophy and whatnot.

Nick’s alcoholism seems to be a little, um, up and down. Like he drinks constantly all day, but Ferrell only sometimes seems to be under its influence. But, even then, he’s not at all the blackout drunk who’s been described. Maybe that’s Will trying to keep it subtle. But I’m not sure. Also, he runs out of money at some juncture and seemingly gets the DTs after a half day, but the neighbor gives him a Valium that seems to cure him for the rest of the film. I’m no expert, but I don’t think that’s how that works. Also, the relationship with Kenny, the neighborhood kid, goes right up to the line of cranky guy/precocious kid cliché, but manages to pull it back by not making it maudlin or like make the kid the replacement for a baby he and his wife lost or something. Instead, the relationship is a pretty sweet one and provides the majority of the levity in the film.

All in all the film is missing some heft. It feels short, and there’s something just light about in a way I wish it wasn’t. I didn’t need it to be a heavy meditation on life, but it definitely felt like a short story instead of a novel. Or even a novella. Which it was, of course. But there was some dancing here to help flesh it out that didn’t really help bolster the richness of the text. It was a pleasant, little film, though. Ferrell is actually really decent in these dramedy-type movies. The kind that do light drama mixed with some light comedy. Like when Ben Stiller drops the slapstick and character-driven stuff and tries on the everyman skin — but like way less Jewish.