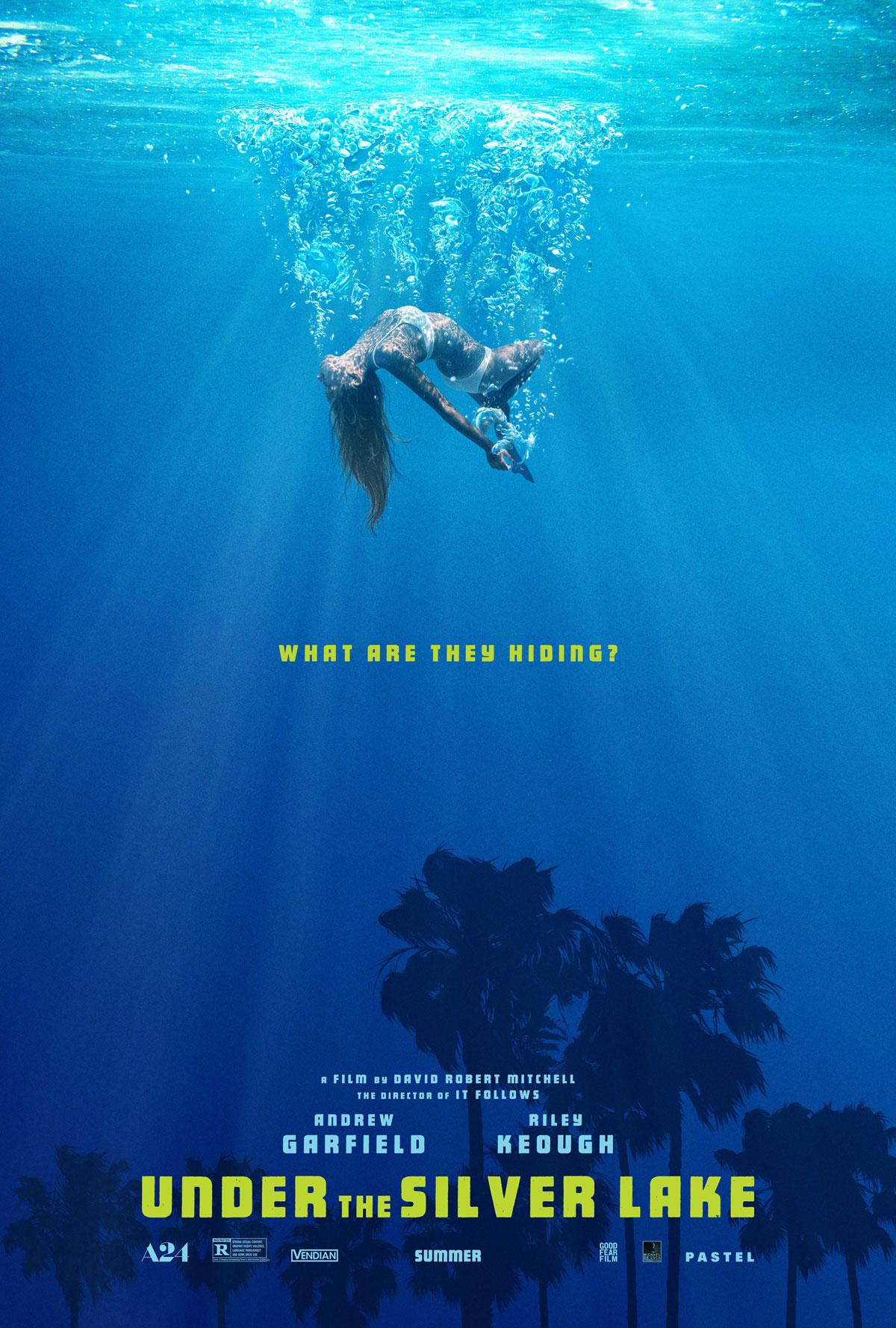 Under the Silver Lake

Let’s get the straight: Under the Silver Lake is not a good movie. It’s scattered, nonsensical, amateurish and an obvious attempt to do some sort of Hitchcock / David Lynch / Coen Brothers mashup. That attempt is not at all subtle, either, and at times you can almost feel the filmmaker going, “Hmm, how can I make this as confusingly weird as possible (Lynch), add in a plot that focuses less on a cohesive narrative than a collection of strange people and events (Coens) and score it in a way that underlies the whole thing with dread (Hitchcock)?”

Which all actually sounds awesome. And is kind of what the trailer promises. The execution, though, is where the thing falls apart. We start off with the very familiar voyeur situation a la Rear Window with our protagonist, Sam (because, of course his name is Sam), very obviously ogling some of his neighbors in his apartment complex. There’s a naked bird lady and a young blonde woman who he seems to fancy. There are plot holes right off the bat here that you could drive a truck through. He’s an out-of-work dude who is maybe, possibly an actor? And all he does all day is sit around and do nothing. And he’s never noticed this blonde before? Despite the fact when we see her apartment later, it’s completely furnished very specifically and she’s clearly been living in this small complex for some time? And, yes, the rest of the movie doesn’t at all seem to really care about reality or details or anything like that, but this woman’s disappearance is at the crux of the plot, so it would have been nice to at least not botch the setup.

So Sam. He’s not what you would call a sympathetic main character. He’s lazy and self-absorbed. Which I suppose is fine and not atypical of your modern leading man. But then he beats the shit out of a child and dabbles in breaking and entering (multiple times)  and out-and-out murder. His motivations are very muddy and his personality inconsistent and not particularly appealing to watch for more than five minutes. He also seems to be able to get into exclusive parties all over LA usually wearing a dirty t-shirt and what look like pajama bottoms. Not particularly realistic. Not only that, but women seem to throw themselves at him, despite the aforementioned ensemble and his smelling of skunk (a fact that conveniently comes and goes when the director sees fit). And, sure, he’s Andrew Garfield, so he’s not a bad looking guy or anything, but I don’t think we’re supposed to think about the situation in that meta of a way.

In fact, now that I think about it, there are definitely some parallels between this film and the Scorsese movie, After Hours. Or, to lesser extent, Desperately Seeking Susan. Of course, those are arguably just rips of The Wizard of Oz anyway. All the wandering from scene to scene, our main character serendipitously finding himself in and around weirdos that the writer thought might be entertaining. The point is, whomever put together the trailer for Under the Silver Lake was a better editor than the one who put together the film itself. It just looked cool. But, more times than not, the actual film came up short as we stumbled from scene to scene with little to no cohesion. And very little in the way of care for everyone and anyone in the cast. Oh, also, the “twist” at the end is really dumb. And there’s a completely unnecessary amount of nudity. Although I suppose for those of you out there who wondered what Spiderman’s ass looks like, you’ll really appreciate that part.