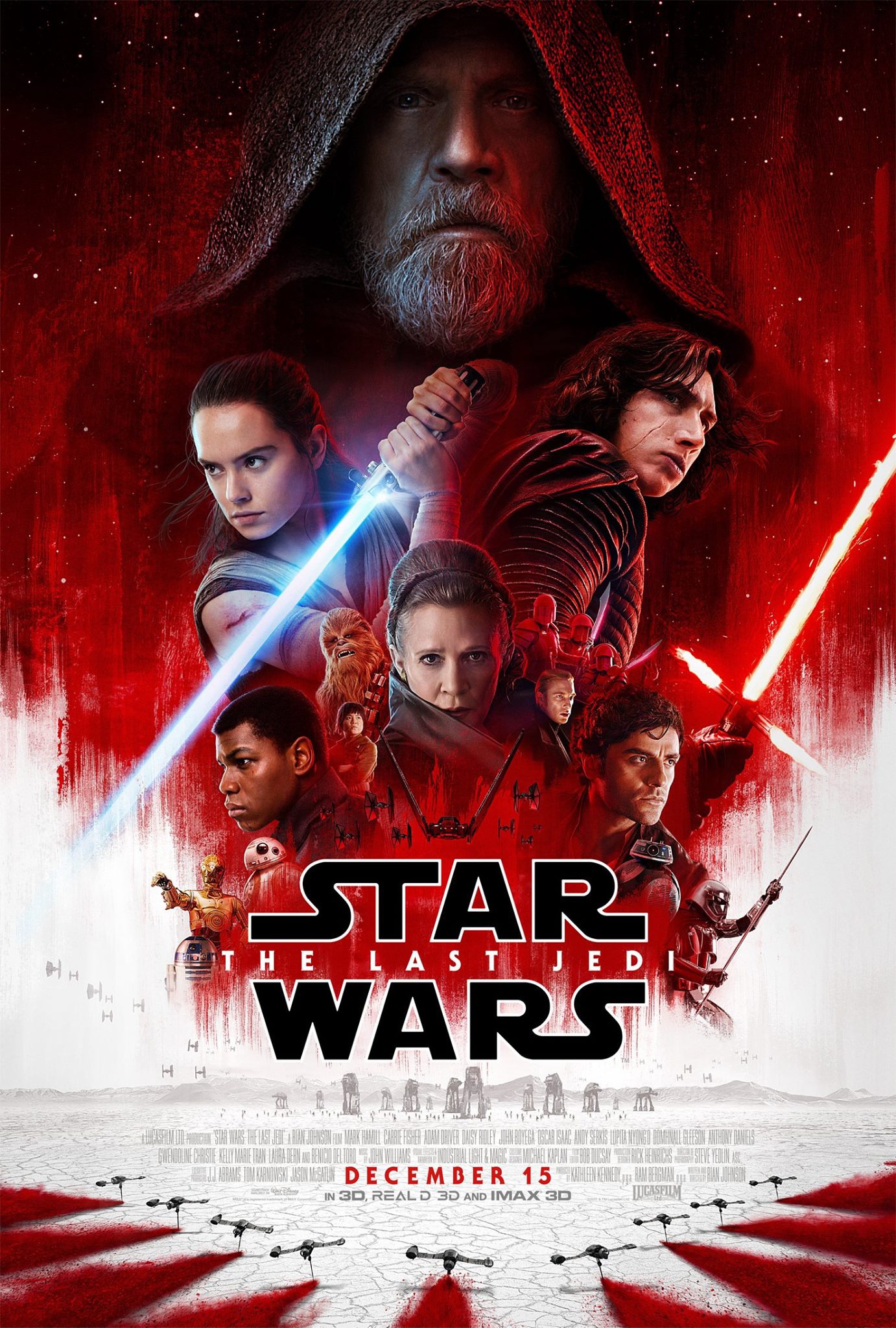 What can I say about The Last Jedi that hasn’t already been said? Well, nothing, really. Other than to say ho-hum. Maybe it’s age. Or maybe it’s cynicism. Or maybe these things just aren’t for me anymore, but I came into this movie on opening night with high hopes. We splurged for the dine-in experience and had apparently even gone for the 3-D thing. I still don’t like 3-D. It’s a bastardization and generally makes films look dark and shitty (the one exception being Avatar.) But that’s another discussion for another time. So, we went in whole hog and walked out kind of flat, truth be told. Though my $16 Applebees-like quesadilla did go well with my two beers.

I saw A New Hope in the movie theater when it first came out. Granted, I probably slept through a good chunk of the movie, but there was certainly a magical quality to it. The characters and the humor and the special effects and the good versus bad all lived within us in a way little could. Same went for Empire and even Return of the Jedi to some extent. In all fairness, we were children and children are notoriously impressionable, so they kind of had a built-in audience. But back then it all seemed so earnest and the good and bad so forthright and honest in its mostly terrible dialogue. But we bought in hook line and sinker. But now, even with better direction and better dialogue, there is a self-awareness that pervades. Rian Johnson knows he’s making a Star Wars movie. Everyone involved knows he or she is making a Star Wars movie. And it seems that they are also aware that they have the financial future of a large corporation and several thousand employees on their backs and a history to both honor and move on from.

And it’s because of this awareness that it seems like nobody really wants to stretch too far; to push the narrative beyond what amounts to “hey, we need to knock out that X so we can get everyone to X.” This exact scenario happens over and over again in the movie. In fact, the whole two-and-a-half hour runtime is basically a string of people having to destroy stuff to save stuff, including no less than two kamikaze runs in order to destroy that thing (one successful and one less so). I understand Johnson probably wanted to keep the plot simple and try to avoid all of the tax law nonsense that bogged down the prequel trilogy, but the simplicity ends up yada-yaddaing a whole lot to get everyone in a position to, once again, be threatened with something large they have to blow up to either defeat or escape the bad guys.

Speaking of bad guys. Where did this Snoke dude come from? I guess he was in The Force Awakens, but he looks like a crappy, inflated Gollum (also played by Andy Serkis) and is about 10% as interesting. There’s also General Hux, who is just kind of a pathetic idiot, and then there’s Captain Phasma who just kind of shows up in her giant, shiny stormtrooper outfit with no introduction and no reason to stick around more than a couple minutes — which she didn’t. So that leaves us with Adam Driver’s Kylo Ren. And, dammit, if I can’t separate him from his bizarro character on Girls. It’s my fault, I know, but it’s really hard to take the dude seriously. Especially when the director – for some unknown reason — has this weird scene in which a shirtless Kylo stands all greased up in his boudoir playing mind-Skype with Rey, who’s hanging out on a rock somewhere in the middle of the ocean. He’s not a bad actor. He’s actually a decent actor, and channels the proper amount of millennial lack of humility and inflated self importance, but there’s just something about his face — which is still extremely compelling — that I just have an issue being scared of and not wanting to giggle at.

Also, did you know Princess Leah can fly? And Luke can bend time and space? And The Force isn’t really something you necessarily need to learn to employ and be a Jedi to practice? And AT-ATs can just appear on the surface of planets without anyone noticing? And that there are just dormant rebel bases all over the place that can be switched on with like a little light switch or something whenever you need them? And that somehow the 12 remaining rebels are going to reconstitute to beat the First Order? And can we talk about Yoda? That fake-ass looking Yoda? That stupid, fuzzy CGI thing with the flat eyes that probably looked worse than it should because of the dumb 3D glasses, but that disrespectful, dead muppet who was always a little sarcastic and whatnot, but is now just kind of a burn-history-down ghost? I don’t know… It just feels like they took the rules of the universe — and even some of the characters therein — and either ignored established lore or just didn’t take care to mind it. Again, this movie is 150 minutes long, so it’s not as if they needed to rush things. And we know there can be an almost infinite number of films upcoming, so why try to pack so much into this one film rather than taking the time to flesh out some of the details? The thing is just kind of a mess that way. We go from one scene to the next with very little reason or connective tissue and none of it ultimately feels monumental or momentum-changing other than to take things from what seems okay to what seems pretty damn desperate.

Anyway, was there entertaining stuff in this movie? Sure. But did it feel epic and world building the way these films are supposed to feel? Did we come away with a deeper understanding of our heroes and fear of our villains? No, not really. And perhaps this is the effect of having things like Game of Thrones in our lives, where we have a Last Jedi-like experience on a weekly basis, but with much more attachment to our characters and fewer of those stupid Porg things.