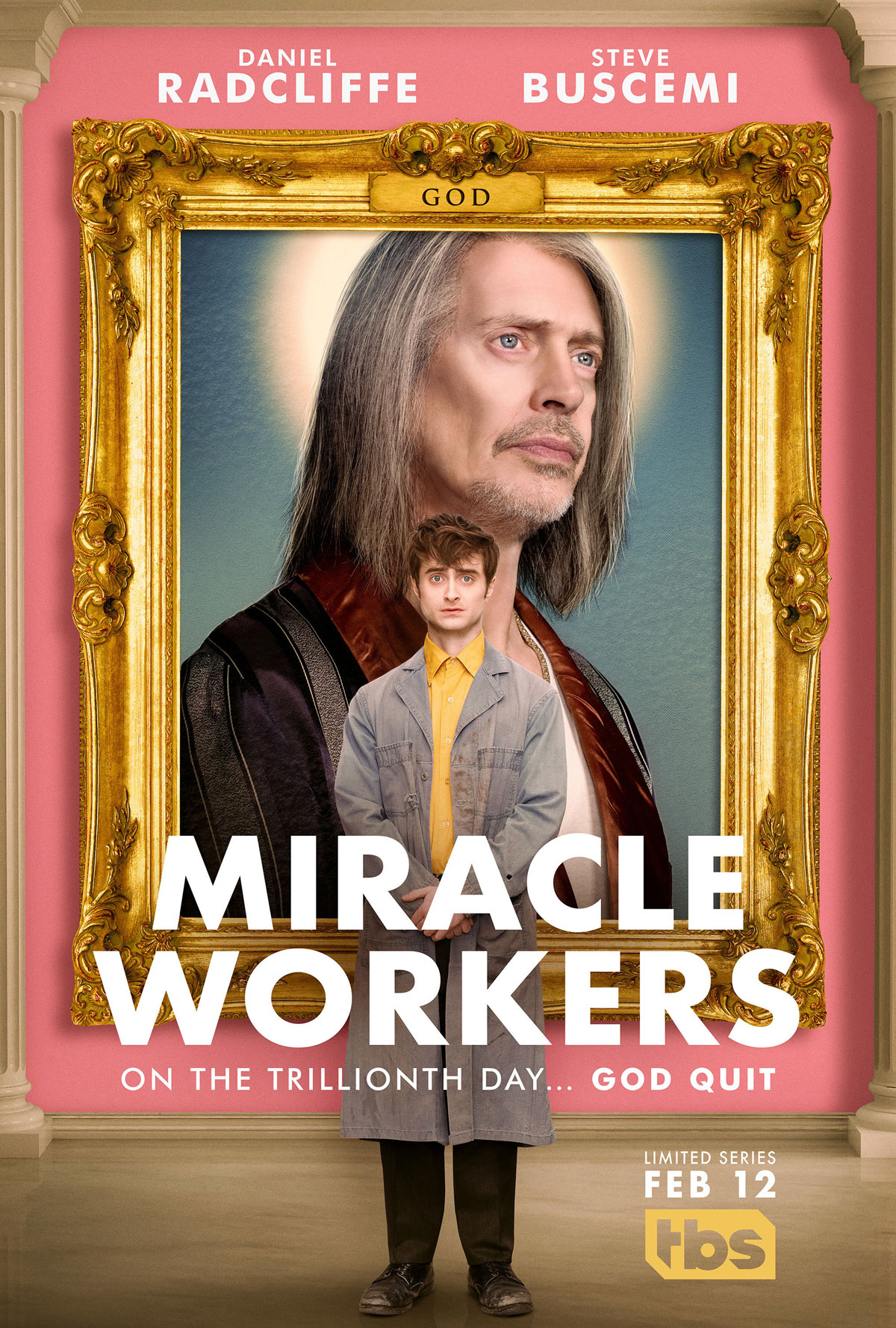 Steve Buscemi as god. Sure, that sounds like a good four-word pitch. Steve Buscemi as Trump as god. Now, that’s a pitch! Well, not Trump exactly, but like a bumbling, weirdly vengeful leader who is too wrapped up in his own nonsense to understand that there are billions of people who are affected by said nonsense. And is also illiterate. And really, really dumb. And has weird hair. And an inferiority complex. And loves to watch TV. Maybe I’m just projecting, but portraying god as the incompetent CEO of a company called Heaven, Inc., whose main product is Earth, just feels like a reflection of our current life. Especially when god decides that his best bet is just dismantling the whole thing and blowing up the Earth because he’s become bored with it and is really focused on his lazy-river restaurant concept (which is worse than it sounds).

It’s another high-concept sitcom not completely dissimilar than The Good Place that is essentially a workplace and relationship comedy couched in social commentary. In fact, there are many elements that are similar between the two, but Miracle Workers is definitely missing some of the sunshine and light that The Good Place figured out is its lane. But the “everything may seem really shitty, but it’s worth putting the effort in to save it” message is at the heart of both.

Now, my understanding is that this season of the show may be its only season. Or at least its only season that includes this whole god and heaven thing. Meaning that if there’s a second run, the creator, Simon Rich, said it’ll be an anthology using the same actors, but not the same characters or situation. So I suppose we can take this story as a close-ended one. It’s a bummer, really, as it seems like there could be an endless number of gags about Heaven being a corporation where there is a department for everything on Earth, including the Department of Dirt, the Department of Clouds (where they get bored, so they sometimes make the clouds look like stuff) and the Department of Animals (in which god admits that giraffes are just tall dogs with a leg for a neck). The people from the Department of Bugs pretend they’re in control, but reluctantly admit that they just fly all over the place, and the Department of Genitals is asked by god to come up with a way to explode Bill Maher’s penis due to his virulent atheism.

But the main plot here is that god has essentially grown bored with the Earth and has decided to chuck it. It’s just too unwieldy and hard to maintain, so he tells all the employees of Heaven, Inc. that he’s just gonna blow the place up. This means they’re all out of jobs, of course, just like any other corporation whose constituency goes away. Enter Daniel Radcliffe, who works alone in the Department of Answered Prayers. He is a sallow, lonely young man who is very earnest in doing his job on the smallest of scales. He spends his day in front of an antiquated computer working to help people find their lost keys. He gets plenty of prayers, but he only takes on the simple ones. Though who doesn’t love finding their lost keys!? This could be an underhanded comment that prayer doesn’t work, but… Anyway, an eager go-getter (Geraldine Viswanathan) comes over from the Department of Dirt and immediately starts to want to answer tons of prayers, but quickly realizes that it’s not as easy as it looks (and she ends up killing lots of people in tsunamis and shit). But when they hear god is gonna X out the Earth, they determine to save it by answering one of the hardest prayers of all: making two people kiss and fall in love. They pose a compromise to god: if they can make this prayer come true, he will put off destroying the planet. He agrees to the bet and sets a timer to the globe’s destruction. Joining the prayer-answering duo is god’s old personal assistant (Karan Soni), who has grown tired of literally wiping his ass and seeing on a minute-by-minute basis that his boss is the world’s biggest moron.

The three settle on a dorky potential couple on Earth who have prayed for the other to like him/her. All they have to do is get them to kiss and the world is saved. Turns out that forcing love (even though the two seem to really like each other from their first meeting) is harder than they think. More people end up dying in the pursuit of a kiss than you’d expect is all I’m saying. But the show maintains some decent jokes and gets points for its very multicultural cast (despite the two top-billed cast members being white guys). As one of the two white guys, Daniel Radcliffe plays the rule-following straight man. And he seriously doesn’t look well. Karan Soni, as the cocky, yet scarred, ex-personal assistant of god steals every scene, though. There’s definitely something familiar about his character — whether it’s Jack Donaghy’s executive assistant, Jonathan, on 30 Rock, or just about any high-level CEO exec assistant you’ve ever met ever — but he plays everything to the hilt and is just funny as hell. Buscemi playing a dolt is funny at first, but it kind of exposes the limitations of his straight comedy acting and is less funny after we get his schtick. This just isn’t his lane. If they could have gotten Christopher Walken, now that would have killed!

So, is this a successful endeavor? Well, first, it was only seven episodes. So even it wasn’t, the misery would be over relatively quickly. There is no second thing, but to say that there were both good and bad things about the show. The cast was great for the most part. There were some laugh-out-loud things, most of which were site gags or clearly written one-liners. There are some other things that they seem to go back to again and again thinking that it’ll be funny the seventh time they try it, but when it clearly falls flat the first time repetition isn’t going to make it any funnier. And it’s pretty clear — or at least it was to Ms. Hipster – that they didn’t have much of a budget for this show. I thought the cheesiness and clearly set-like qualities of everything was intentional, but in retrospect, maybe not. The whole thing just felt like it made sense it was on TBS and not, say, HBO. But having not seen a ton of single-cam “network” sitcoms of late, maybe that’s just the way these kinds of shows look, including the 1996 special effects. In any case, I think the show was worth the somewhat short watch, but the experience was a little bit of a mixed bag. In fact, and I don’t want the Potterheads after me, Radcliffe was one of the least good things about the show. His sad-sack character didn’t really go anywhere and I spent a good deal of my time wondering if he was supposed to look as sickly as he did, or if that’s just what adult Harry looks like. Those Brits are not a tan people.