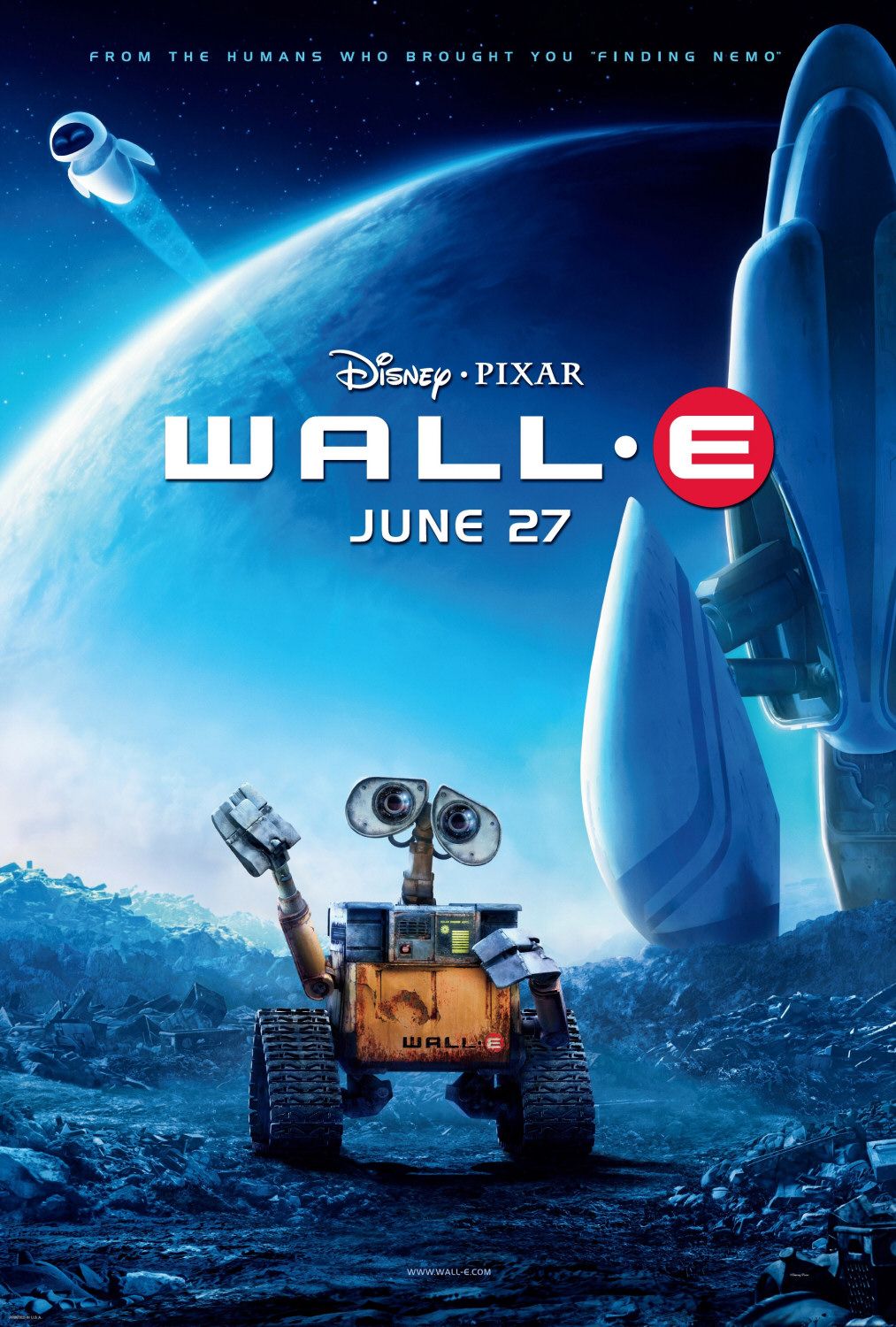 Since when is Disney headed by Al Gore? I haven’t seen An Inconvenient Truth (cuz, uh, I haven’t gotten enough exposure to the guy since winning like every award on Earth), but I imagine this is like the post-apocalyptic cartoon version of it.

The world is trashed–literally. The once bustling metropolis of somewhere-in-the-US has been reduced to towering heaps of garbage and desert-like conditions. And who is to blame for the Earth’s demise? Big business (a company called Buy n Large makes everything) and an increasingly oblivious and uncaring, ambivalent public. The concept of one company owning everything in the future isn’t a new concept at all, but the concept of said conglomerate wrecking the planet just may be–especially in a children’s movie. So all life, plant and animal, with the exception of one roach that we happen to see seems to have been eliminated from the planet, buried under mountains of waste. Left alone on Earth is a garbage-compacting robot named WALL-E. Actually there looked to have been tons of these robots, all named WALL-E, left to clean up the planet while the gluttonous human beings went into space for five years, with a plan to return to an Earth as spotless as ever. This WALL-E looks to be the soul survivor of the clean up effort, and we find out later that the five-year plan has turned into a 500-year voyage–all the while the trash cleaning robots turning to dust and the Earth just as barren as ever.

So the message here is both pro-environmental, as well as anti-globalization and consumerism. Wow, pretty progressive for a company founded by an anti-Semitic, racist, misogynistic homophobe. Granted, the folks I’ve met from Disney tend to skew towards at least two or three of those three categories these days, so who knows how many pinko commie liberals are hidden in that bunch. Regardless, the movie goes on later to make subtle digs at junk food manufacturers and our society’s leanings towards the sedentary, as we become a country of obese do-nothings. Pretty cool to see, really.

I’m still a little unclear about how many humans actually left the planet to float around on the giant ship (although I only recall seeing a couple thousand cartoon white people), and wonder where the rest of the planet’s inhabitants are, but I won’t nitpick things like that with the fear I’ll uncover something even darker and more sinister in the movie’s message. Whatever the case, despite floating around up there for generations at this point, the Earthlings continue to send out probes looking for any sign of life on planets, including Earth. And this is where we meet the very subtly named Eve. She, a robot who resembles an egg, comes to Earth to try to find plant life at the behest of some human somewhere, and in her journey runs into WALL-E. Of course he’s been rolling around Earth for 500 years with just a roach for a companion, so he’s curious about the new visitor, and eventually develops a “crush” on her. I’m not sure why a garbage robot would have a sense of love, but it wouldn’t be much of a movie without it now, would it?

The animators do manage to give the robots personalities, somehow. WALL-E is a bumbling idiot type who’s always tripping over stuff, but loves to watch Hello, Dolly! and listen to old standards on his onboard tape deck. Again, not sure why a robot from the future would have a tapedeck (or a VCR for his movie for that matter), but maybe the filmmakers thought that old technology gave him an old soul. Eve is the sleek, new tough chick. But this goofy guy melts her heart with his gentle, good-naturedness. Blah. The fact that WALL-E looks almost exactly like Johnny 5 from Short Circuit is a little weird. I’m not sure if that was intentional, or just a direct rip by the animators who figured lightening maybe could strike twice–even without Fisher Stevens.

The animation itself is funky. While on the Earth, things look very realistic. The actual live-action Fred Willard even plays the CEO of the multi-national corporation that’s ruined the planet, but once we get into space, the movie looks more like a typical Pixar film, with humans being big, bulbous creatures and things looking more cartoonish. I’m not sure why Fred Willard played it as an actual human, but I’m assuming someone somewhere decided the guy was cartoonish enough to pass. This thing was just aching for a great Max Headroom reference somewhere for us older folks, but alas… They did play is pretty straight, actually. There were no references (that I recall) to current celebs or companies, or little in-jokes for the adults. In fact, there wasn’t that much talking at all until later in the movie. The two main characters, WALL-E and Eve, can only really say each other’s names and that’s about it, so everything on the screen has to convey what they would otherwise speak. Again, a pretty cool trick.

Did I mention I had an almost-four-year-old sitting next to me the entire movie? Oh, yes, and he had all sorts of questions. Every time there was any kind of musical interlude he asked if the movie was over. He associates music with credits–and apparently didn’t live through the John Hughes 80s, the high times for musical montages. He also had to “poop” about three minutes in, so I may have missed something important. Whatever the case, I couldn’t dedicate my full attention to the plot, or screen for that matter. I did enjoy it, but I’m sure it would have been more enjoyable hadn’t I had a little voice in my ear the whole time.

This thing will undoubtedly be huge on DVD. It’s a nice looking film, is clever and has a decent messages for both kids and adults. This makes me realize again what crap movies like Cars are. Take the family, but just make sure they poop beforehand.