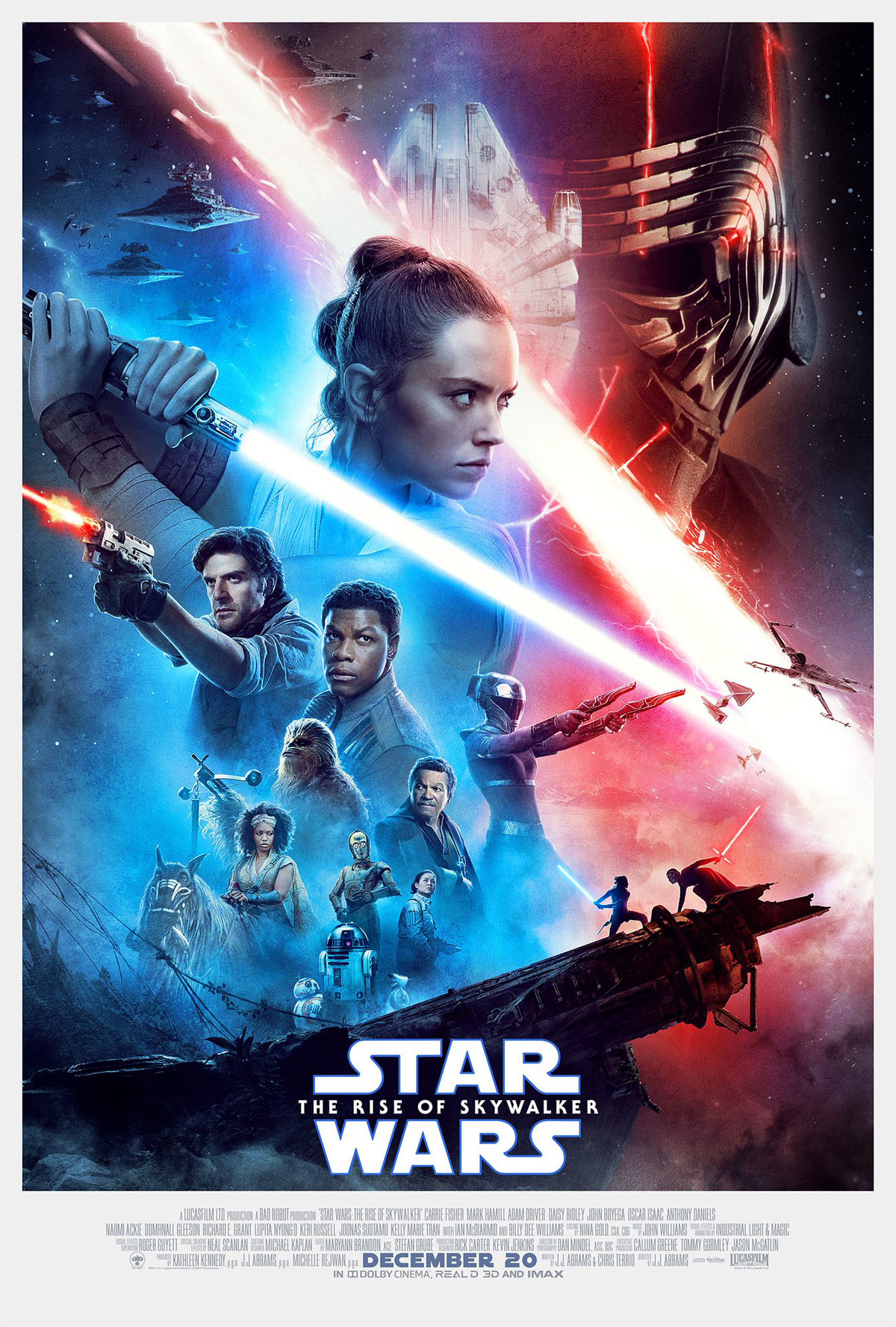 Star Wars: The Rise of Skywalker

Nobody needs to hear yet another Star Wars take. But here it is. This series has outlived its usefulness. The trilogy, as they’ve concepted it, has outlived its usefulness. It’s good that it has ended in this flaccid place. The death knell of the this insanely drawn-out, nine-film soap opera. This seemingly audience-tested, hodge-podge of a movie. The Rise of Skywalker? Honestly, I watched the movie and I’m not even certain what that title means or how it applies. How is this the end or denouement of anything?

So, you can probably guess from this intro that I was not a huge fan of Star Wars: The Rise of Skywalker. Even now, a week or so later, it’s a fleeting memory. Because there is no heft here. No build. No heart. And that’s disappointing. It’s a grab bag of character sketches and tired scenarios strung together with social-media-tested fan concessions. All of which equals a milquetoast movie with little to no conviction for anything. In the final act of this saga there should be stakes. The writers claim there are stakes in the narrative itself, but at every turn they undermine this. Characters who are put in real peril are hardly in peril. They kill no one of substance, really, who is not already dead in the films or dead in real life. And they bring back everyone the fans “love” to give us send-offs that they think we want, but just end up seeming cheesy.

The plot is ultimately pretty much par for the course. Though they bring back Palpatine as the big bad for some reason. A character that nobody has thought about in decades. And certainly nobody cared much about to begin with. Not unlike that big weird dude we were supposed to be scared of in the last couple of films who seemingly came out of nowhere. In other words, they’re no Darth Vader. But, as usual, our characters have to break in somewhere to retrieve something that will lead them to a huge battle in which they have to shoot a small thing down a small space to destroy something large. Literally. That’s it. Yawn. Of course this plot point is not unlike Rogue One, but that film had real stakes. They asked us to feel it. They made that shit real. That was a good movie.

The thing is, once you realize they’re not going to take any risks or change any lore and are basically going to undermine some of those decisions they made in The Last Jedi, the tension and excitement kind of goes out of the thing. Not that there was much of that after watching the trailers. It felt light then. And it felt light afterwards. The whole thing just kind of has a deflated feel to it. A yeah-yeah, let’s get on with it, end this thing and start something new. What that is will obviously be up to the Disney folks, but let’s hope they don’t try to sell us another dreary rehash.

That all said, the actors do the best they can with what they’re given. Even the hokey dialogue and some shockingly juvenile character interplay (especially the awkward “sexiness” between Oscar Isaac and Keri Russel’s masked character) can’t squelch the charisma of the cast they’ve put together. It is a little painful watching 82-year-old Billy Dee Williams try to do the Billy Dee Williams thing, but we’ll cut him some slack. Otherwise, the connection between Adam Driver and Daisy Ridley is pretty strong, even if the narrative way their characters interact isn’t. Literally, there are very few rules in this world that make any sense or maintain any consistency, especially the physical versus psychic bond between what ends up to be the most consequential relationship by far in the trilogy. It’s nonsensical. All other relationships just turn out to be dumb, quite honestly.

Anyhow, we’ve reached the end of the Skywalker saga. And that’s just fine. Maybe I’m too old. Maybe I’m too jaded. But I’m not sure what the Star Wars universe holds for us next. And I’m not quite so sure I care. And that makes me kinda sad.