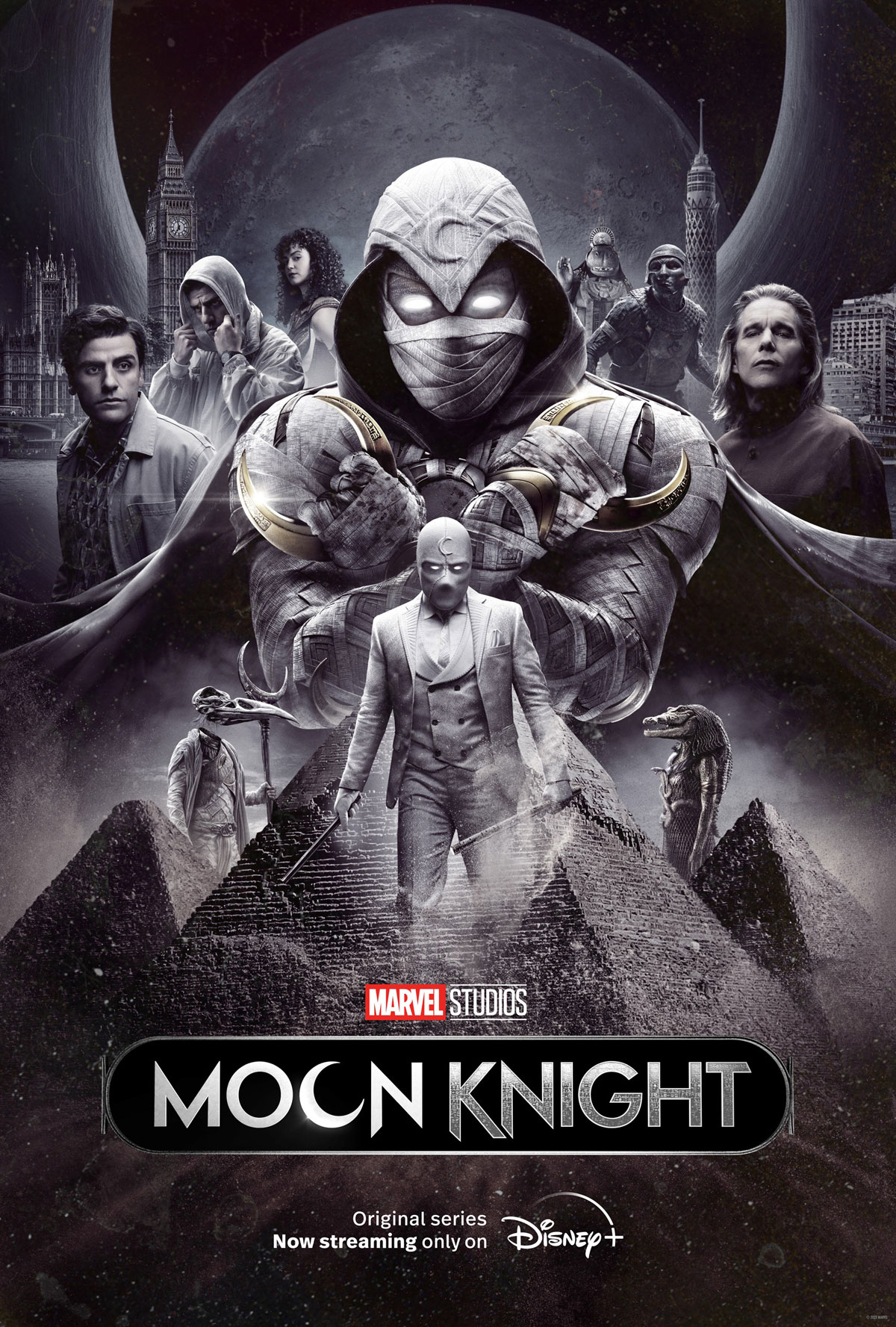 Gods and monsters. Something that Moon Knight trades in. But not something I’m sure I care about. I do care about a fantastical series starring Oscar Isaac and Ethan Hawke, but that draw can’t override the fact that too much CGI is, in fact, too much CGI. Soooo much CGI. Which I suppose is necessary when you’re showing us the underworld and giant Egyptian deities fighting one another. But like we already had both the 1999 The Mummy and 2017’s Tom Cruise stinker, The Mummy. Did we need more pyramids and shit? And, yes, I know Moon Knight is pre-existing comic book IP, so this is all built-in, but that doesn’t mean the show had to move from an interesting story about a dude with dissociative identity disorder to a computer animated boss battle. A thing that Marvel has the bad habit of doing over and over again.

First, I really do like Oscar Isaac. He can swing from drama to comedy seamlessly without doing schtick. But, c’mon. We get a distinctly Jewish character and we can’t find a single Jewish actor to play him? It’s like they see Llewyn Davis on his resume and just assume he’s one of the tribe? He ain’t. He’s like his generation’s John Turturro. Dark, curly-ish hair? Check! Prominent features and swarthy-ish skin tone? Check! We have ourselves an honest-to-goodness Jew! I can say all this as a wavy-ish, light-haired, pale-skinned chosen person myself, but I guarantee that there is a whole cadre of properly-cultured actors in Hollywood to play Moon Knight’s Marc Spector and Inside Llewyn Davis‘ Llewyn Davis. Just sayin’ that in 2022, they ain’t gonna hire Paul Rudd to play Che Guevara or like a younger Jesse Eisenberg to play Miles Morales. I’m not gonna harp on this, because it honestly has nothing to do with Moon Knight per se, but it would be nice to see some one-to-one, on-screen Jewish representation in an industry that has been called out for its poor track record of casting super-white Emma Stone as a part-Asian character and Johnny Depp as Tonto. Don’t even get me started on Mickey Rooney! Point is, Hollywood has worked hard in recent years to correct past wrongs and is constantly called out for any small slip-up when it comes to representation. But watching Oscar Isaac, who is Latino/Catholic, wear, remove and crumple his yarmulke as Marc Spector on screen is apparently just fine. Just. Fine.

So now that I’ve gotten that nonsense out of the way, let’s get to the nonsense that is Moon Knight. I’m not sure I watch these superhero shows to get into mythology and complications. Think about the most popular DC comics: Batman and Superman. Both super-straight-forward stories. Spider-Man. Super-simple. And, yes, there are confusing and/or intricate Marvel properties like Legion and, to some extent, Loki. But it feels like Moon Knight gets in its own way by overcomplicating the personal story of struggle of Steven Grant / Marc Spector by blowing it out into this whole meandering mythology that throws a bunch of names and concepts at you in a very compact six episodes. Some of them cul-de-sac and others just kind of fade away and others are overblown and weird. It just goes from this taught mystery up front where you can focus on the what-the-heck-is-up-with-Steven to this grandiose thing that loses that focus and mires us in too much swirling magic stuff and dark battles that make no impact other than to show off someones vision of what ancient Egyptian gods might look like as the modern-day Stay Puft Marshmallow Man.

As I watched the series, there were some visuals and beats that felt oddly familiar. The trippy directorial approach mirroring Steven Grant’s disassociation with reality. I couldn’t quite put my finger on it until I looked it up and realized that directorial duo Justin Benson and Aaron Moorhead directed a few of the episodes. The pair behind the low-budget, sci-fi mind-benders, Synchronic and The Endless. They have a very specific style that is oddly languid and low-key, until weird shit happens. Which kind of jolts you and makes you pay attention. It’s kind of the soft-loud-soft of movie making. A methodology I certainly love in my music, but takes patience to wade through on screen. But it works in the up-front for this particular show. The pacing is kind of slow and unwinds the duality mystery of Steven and Marc in a way that is both tense and fun. The second part having more to do with Isaac’s manic performance than anything else. And his oddball chimney-sweep accent as Steven versus his Brooklyn lilt as Marc. You can tell Isaac is just having a ball playing this split-personality character, putting his acting classes to the test. Equally happy is Hawke, who plays the creepy bad-guy cult leader dude, Arthur Harrow. His character is a little confusing, frankly, but he does his best calm-on-the-edge-of-explosion thing. He also gets to explore another version of Harrow, which is actually better than the bad-guy version, but it’s too complicated to explain what that’s all about.

Anyway, Steven/Marc is one person. It’s purposely ambiguous if this multiple personality thing is a result of mental illness or this ancient fight between Egyptian gods controlling their avatars. Avatars essentially being the gods’ human forms on earth. Even though the gods also have forms? Steven/Marc not only have their non-hero forms, but also become Moon Knight when activated. I’m unclear when and how they kind of conjure Moon Knight, but he’s the dude who looks like a mash-up of Snake Eyes and Cobra Commander from G.I. Joe. He throws boomerang things and fights hand-to-hand and is generally indestructible, I think. I don’t think he has any super abilities in terms of shooting lasers out of his eyes or flying or anything. He’s pretty much Batman. But with the backing of an Egyptian god. I think that basically his god and Arthur Harrow’s god have beef. So Steven/Marc/ Moon Knight need to battle it out on Earth with Harrow and his followers. Assisted by his archeologist wife, Layla El-Faouly/Scarlet Scarab (May Calamawy). Once their adventures move from London to Egypt, there is a definite swashbuckling, supernatural Raiders of the Lost Ark vibe. Like almost too much so. But it also morphed from this personal story of Steven/Marc to this much broader narrative that felt unwieldy and a bit unrelatable.

Despite my lukewarm reaction to this series, I still felt there needed to be more. Six episodes of anything just feels too stunted. I suppose there could be a second season, but getting Oscar and Ethan back would probably be a major lift. They both work a lot. Though I imagine that sweet, sweet Disney money is hard to turn down. Especially for Hawk, who tends to do lower-budget indie films and hasn’t already also gotten himself in the Star Wars universe like Oscar. So if there is a second bite at the apple here, I hope we get more of the teased Steven personalities and that they lean into some of the wackiness with him and his relationship with Layla and less of the overwrought mystical god stuff. I do think that part of the issue is that the Moon Knight character is more interesting when he’s not in the mask and cape. And once he kind of transforms, he’s a pretty generic superhero. And one without any powers other than being able to get his ass kicked pretty readily without dying. We’ll see what happens, but I’m not holding my breath.