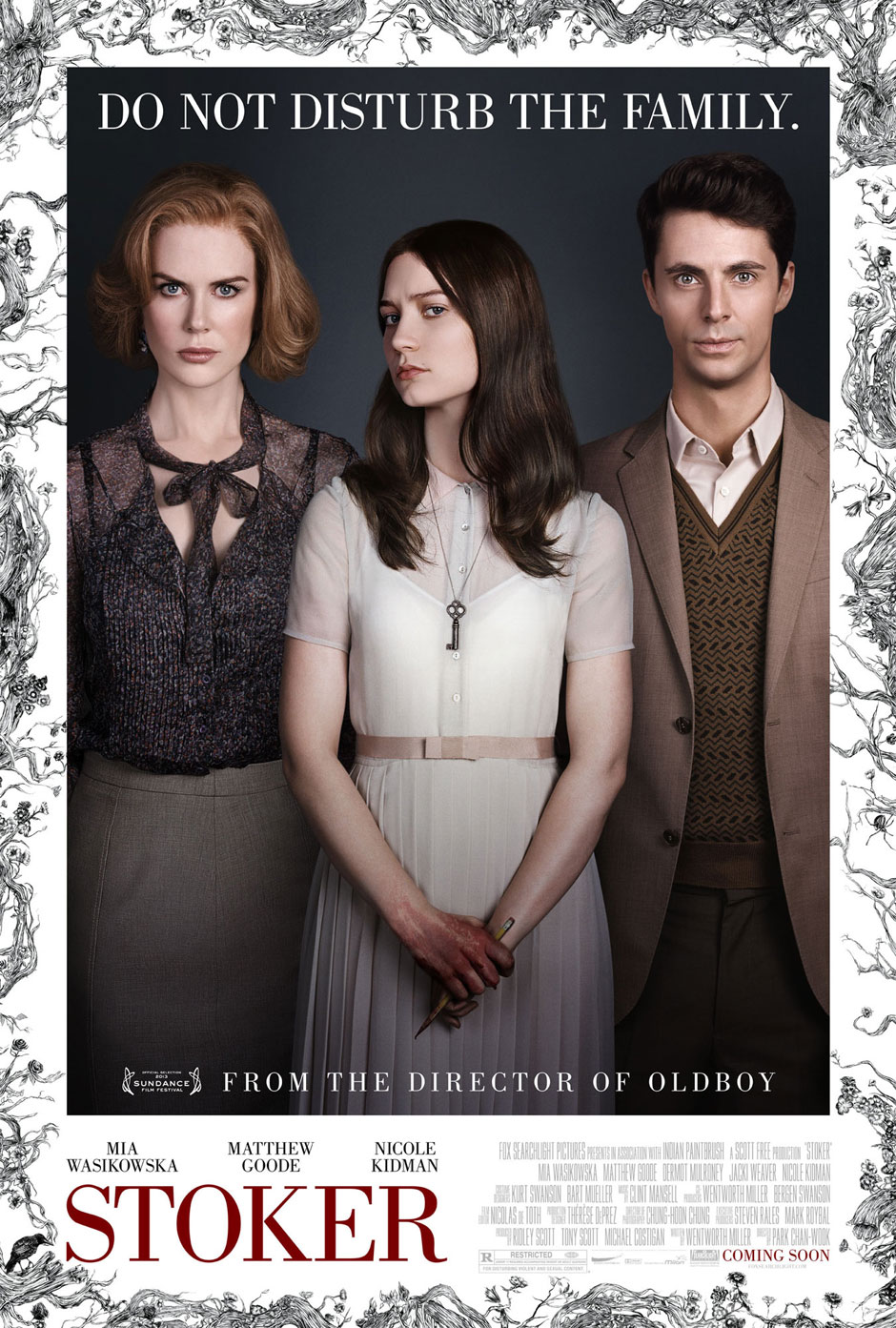 So apparently this movie was written by Wentworth Miller. Who, you ask, is that? Is it some duke or lord sitting in an English manor with his trusty hound by his side and some dude named Wesley in tails getting him high tea and reading him headlines from The Times of London? Nope, it’s the guy from Prison Break with the ballpoint pen markings all over his body and the fake American accent. Weird, right? It’s his first screenplay and it shows.

The director, Chan-wook Park, has been around for years, however, and is most often associated with his cult classic, Oldboy. That’s actually not a movie with which I’m familiar, as it’s not my genre per se, but it’s certainly name-checked at such a blinding pace that it must have some merit as a pretty cool flick. That said, this whole movie seems to balance on Park’s talent as a director. And I gotta say that this thing looks pretty damn awesome. There is one shot of Mia Wasikowska brushing Nicole Kidman’s (who plays her mother) hair that somehow transitions seamlessly into Mia sitting in a duck blind with her father, Dermot Mulroney, that is as artful a transition as I’ve seen attempted in a film in a long time. The whole atmosphere of the film with its languid pacing and slow beauty shots of the main characters’ faces — almost studying them — proves Park’s mastery of the cinematic.

The issue here comes in the storytelling. Miller clearly went for the indie psychological thriller bent, but seemed to straddle the line between indie and psychological thriller too carefully. Park struggles at times to move the plot forward, sometimes lingering too long — which I know contradicts my point above — on shots just to fill the mere 90 minutes that comprise this film’s length. Because, as it stands, the general plot here is thin and the reveal not at all surprising or twisty in any way that makes the very slow build up feel like it’s worth it.

Matthew Goode plays the brother of Dermot Mulroney, the now deceased father of Mia, husband of Nicole. He’s the uncle that nobody knew existed and just kind of shows up out of nowhere after his brother’s death. The family takes him in despite his obvious creepiness, and both women become enchanted with him in their own way. It’s obvious from the start the guy is bad news and that this thing is heading toward a shitshow conclusion. Part of the creepiness of Goode, and honestly the whole film, is that he and everyone else in the cast feel fake, with their attempted American accents and the large, gothic house that they live in in what is supposed to be Pennsylvania, but is obviously not. There are some secondary characters who seem to serve little to no purpose other than to awkwardly show Goode’s character’s dark side and propensity to use his dead brother’s belt for things untoward. I mean do we really need yet another movie that basically says all high school boys are idiots, bullies and rapists?

So if you want to see something just for visual stimulation and some pretty incredible feats of cinematography, dial this thing up. If you have no desire to see another rote movie about a charismatic psycho who infiltrates a dysfunctional family, then go watch an old Hitchcock movie (from which this heavily borrows) and tell someone you love the classics.