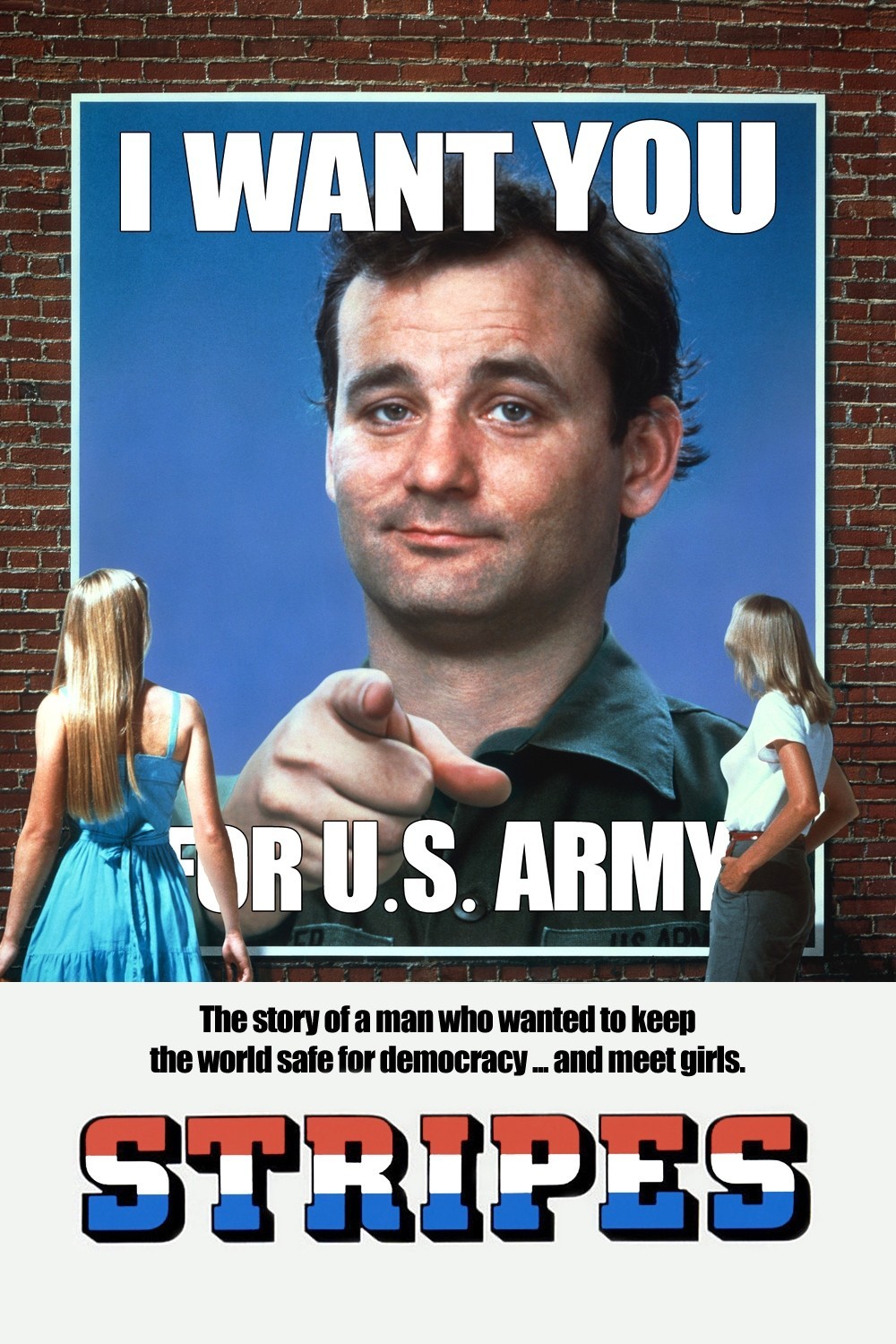 Okay, maybe four stars is overdoing it a little bit, but this thing is a classic. Some may say it’s classically stupid, but I say it’s classically hilarious! Okay, there’s some really stupid stuff in this movie, but Bill Murray gives one of the best jerkoff performances of all time in this send up of the US Army. Oddly enough, this movie came out at about the same time as Goldie Hawn’s Private Benjamin, which basically used the same fish out of water thing that this one did.

John Winger (Bill Murray) is a loser. His best friend, Russell Ziskey (Harold Ramis), is also a bit of a loser. Winger’s life goes from bad to worse when he loses his job, his girlfriend, his car and his apartment all on the same day. Ziskey teaches English to foreigners, which means he has them sing “Do Wah Diddy” and say “son of bitch. Shit!” The two guys see their lives at a dead end, and Winger talks his friend into signing up for the Army with promises of exotic travel and sexy European ladies.

Winger is always the ring leader, and Ziskey the follower, so he goes along with it. So, off to basic training they go. And, of course, they meet the other misfits there, including the fat-ass, the psycho, the dumbass, the whatever. Can this band of idiots make it to graduation without blowing something up? Will their drill sergeant, Sgt. Hulka, have a coronary before it’s all over? Will their commanding officer, the inept Capt. Stillman (John Larroquette), even let them out of the brig?

As with all good 80’s movies, there’s a good dose of gratuitous nudity and anti-Soviet feelings. Unlike a lot of these movies, this one doesn’t ever get serious or try to teach us a lesson. It doesn’t turn into a rah-rah USA propaganda film. Winger is still an asshole at the end of the film–albeit a hero asshole–and John Candy is still a fat lunkhead. Luckily for them, the Soviets are a bunch of bumbling idiots.

Honestly, a lot of parallels can be drawn between this film and Full Metal Jacket. You have the basic training section and then the real life battle scenes. Granted, the battle scenes in this movie take place in a tank disguised as an RV and involved a bunch of idiots running around with no clue as to what the hell they’re doing. Nobody dies–including the enemy–and nobody loves them long time (well, actually Sean Young kinda does.) Okay, the more I describe this thing, the more I realize it’s not really a very good movie, but it really does pack a punch in the memories department.

The scene with Ramis and Murray in Murray’s apartment in the beginning of the film is worth it alone. I laugh my ass off every time I see that damn basketball fly through the window. The timing is just so good between the two guys, you just knew that the two of them in Ghostbusters had to be a blockbuster. The deadpan Ramis and the charismatic wiseguy Murray are naturals, and they play it fast and loose in scenes that seem half scripted and half ad-lib. Just watching Murray try to do push-ups is hysterical. I know he’s grown a lot as an actor over the years, but he remains one of the best in the business at making something out of nothing.