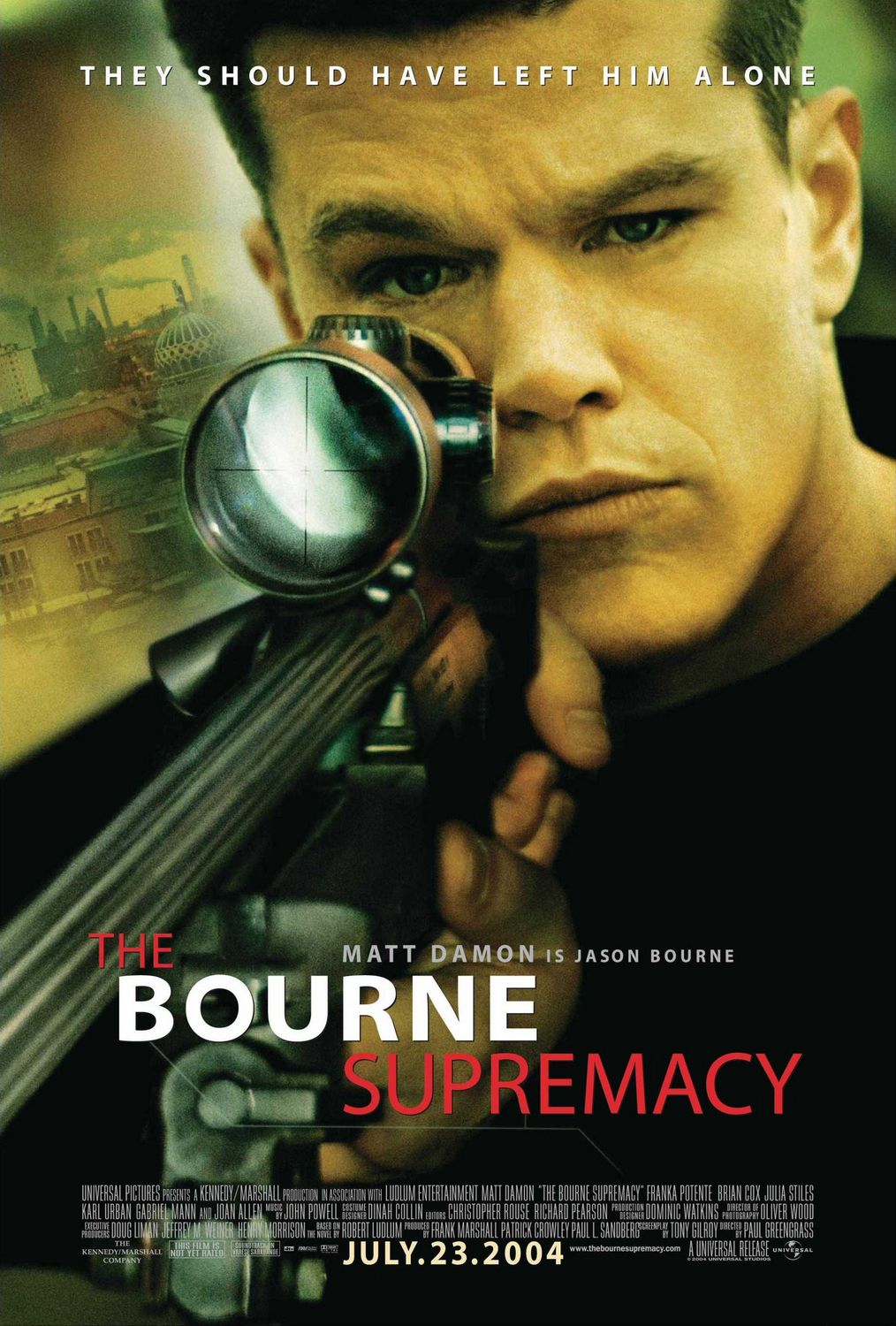 Having sat through The Bourne Identity and not all together hating it, it only made sense to continue the (now) trilogy. Things get deep this time for our friend Mr. Bourne. After all, he’s still a man on the run.

Since his first adventure, he’s packed up his girlfriend and moved around the world, landing in India. We get the feeling that while he’s a wanted man, nobody is looking all that hard for him. He has settled into what could be construed as domestic life–albeit in a third world country where he is amongst nothing but strangers.

Meanwhile, back in the shady CIA world, he has taken on the status of a ghost (a fairytale) with the dismantling of the super-secret Treadstone program. His status doesn’t escape a group of renegades, though, who frame him (in absentia) for a foiled CIA operation in which an undercover buy for very important docs is busted up, agents murdered and all sorts of other fun. The frame up won’t be complete, though, until the baddies track down Bourne and off him too to keep him from talking–thus closing the loop.

In the process of trying to kill Bourne, the hired gun accidentally (or maybe not) kills his girlfriend. And now it’s on! Bourne is pissed and out for revenge. Of course he thinks this was just the old folks from the Treadstone program finishing what they started, and has no idea that he’s been nailed as the prime subject in this other crime. So once the assassin and his people figure out they didn’t kill Bourne (he narrowly escapes the assassination attempt), he now has these people after him, as well as the CIA who think he killed their agents. So now Bourne spans the globe to figure out who killed his girl and who is currently trying to kill him.

As usual he toys with everyone, just completely kicking everyone’s ass he encounters. He eventually gets into one of the craziest car chases I’ve ever seen somewhere in the vicinity of Moscow (although it looks to actually be Germany). All the while his memory of the past is trying to reconcile itself with the killer he knows he has become. His flashbacks this time revolve around the assassination of his first mark, a Russian and his wife. He is determined that there is a tie between that kill and what is currently happening to him. The tension here comes not only from the action and explosions, but from the internal struggle within Bourne to justify who he is, and untangle all his feelings of guilt and confusion.

The CIA agent trying to track him, Joan Allen, is an excellent actress, and plays the conflict really well. She knows it’s her job to track down Bourne, but somewhere she knows he’s not her man. Ultimately Bourne proves her intuition right, of course, and the whole plot implodes. The weirdest thing about the movie is that Bourne’s biggest weapon turns out to be a little micro-cassette recorder. Who knew? Damon once again shows surprising dexterity and athletic prowess dispatching with all comers in a dazzling display of non-CGI, non sped-up ass whoopin’. He’s a man of few words, which makes him an interesting mix (much like the latest James Bond) of stone cold killer and thinkin’ man. The ending of this film is decidedly downcast and not action-y, which is a nice piece of character development knowing that The Bourne Ultimatum loomed around the corner.