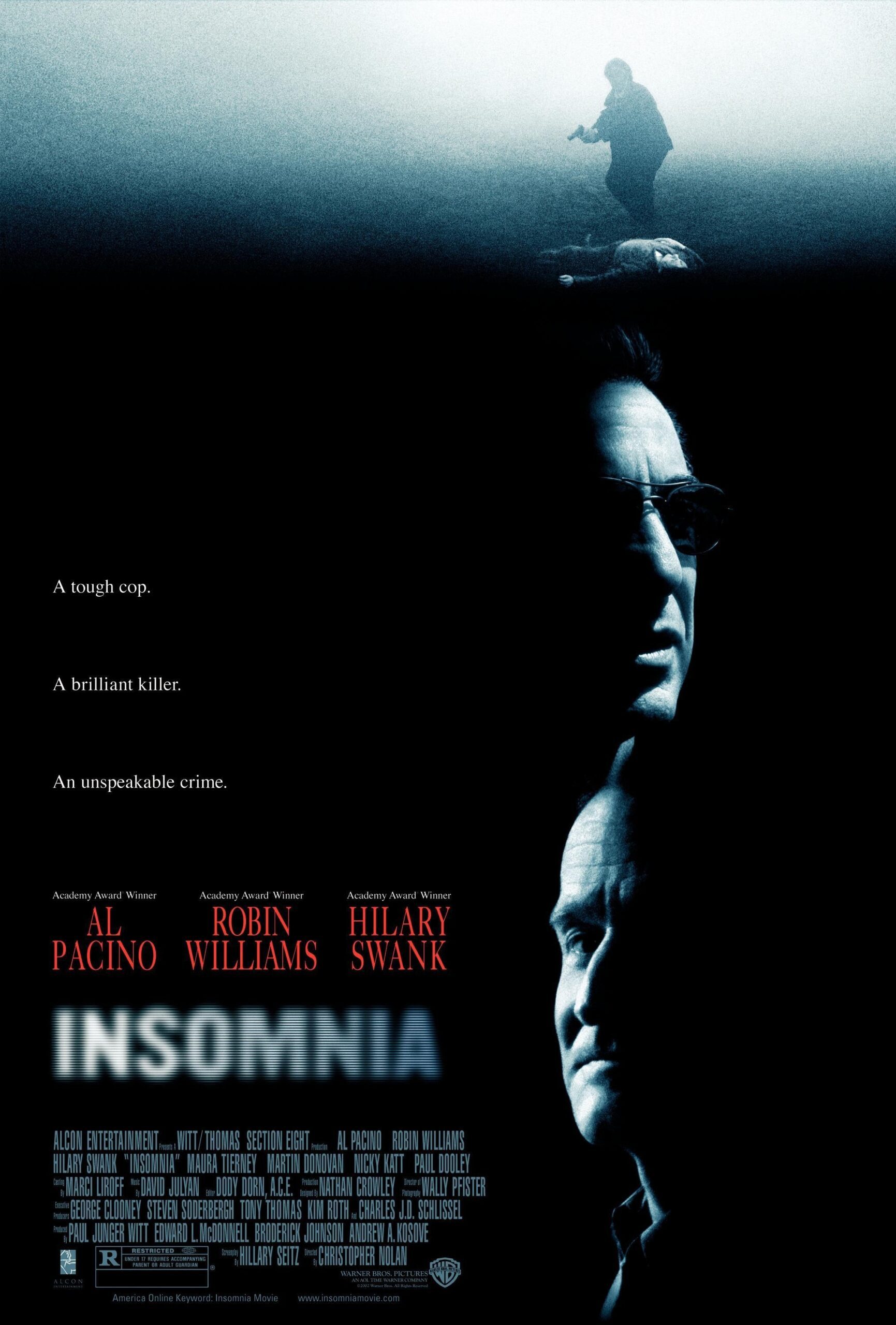 I had wanted to see this film when it was out in the theater, but I never got around to it. I’m sure there were holidays, or late nights at work or something, but I just couldn’t get out to see it. And then I forgot about it. It faded into the background with the other things I meant to do but never seemed to have time for. And then I saw it on the shelf at my local video store and everything came flooding back. It was the director of Memento, starred an aging screen icon who’s twenty-years removed from his best work, and it takes place in Alaska. Some disparate elements to be sure, but an intriguing triumvirate nonetheless.

From minute one, I couldn’t help but be reminded of Smilla’s Sense of Snow, whose Denmark and Greenland locations played as much of a role in the movie as the characters did. Insomnia‘s similar Alaskan environs gave that same awful sense of seclusion and being dwarfed by the natural world. Alaska is also bathed in 24-hour daylight, throwing off not only our, but our main character’s sense of everything.

LA detective, Will Dormer (Al Pacino), and his partner go to Alaska to help authorities in a small town solve the murder of a teenage girl. They are sent there because they are under investigation in LA. I’m not sure why their captain sends them out of town during the investigation, but… They both seem to have some connection to the police chief in this Alaskan town, but we’re never told what it is (a most curious omission). There’s an eager rookie cop in the office (Swank) who, coincidently, followed Dormer’s career, and idolizes him.

Everybody in this small police department, it is painstakingly pointed out to us, is very by the book and on the up-and-up. This immediately sets Pacino’s character up as an outsider. We know he’s a good detective, but we get a glimpse at his tactics, and know he’s under investigation by LAPD’s internal affairs. We also find out that his partner is going to cut a deal to stay out of trouble, and we know that this really pisses Dormer off. Then, in pursuit of the killer, Dormer “accidentally” shoots his partner while chasing the killer in the fog. To the viewer it looks like an accidental shooting, but to Dormer things are much less clear. He hasn’t slept in days (due to stress and the fact it’s light 24/7) and can’t seem to focus on his own feelings about the situation.

Here’s where the problem lies. Pacino is a decent actor, but I think he really missed on this one. I’m not sure if he was just phoning it in, he honestly didn’t get it, or the director, Nolan, was too intimidated to say anything to him. Yes, he looked tired. Yes, he acted tired. But we see nothing in his face about the worry and guilt he holds about the shooting. We don’t see the angst one would expect. He just looks tired. Nolan intercuts flashes of memory and some hallucinations that accompany Dormer’s insomnia, but Pacino doesn’t seem to register a single one. It’s as if these snippets weren’t in the original script, and Nolan added them as an after thought. I just think Pacino has lost a step ever since his damn hoo-haw! movie. In fact, he still uses that damn Southern accent from that character in almost every subsequent movie.

Seriously, go through almost every movie he’s done since Scent of a Woman and you’ll hear the New York-born Pacino speak like he’s from North Carolina or Texas or something. Maybe he’s been replaced by a stand-in or redneck robot or something. The whole point of the movie is lost on him, and it’s sad. The irony heightens when the killer Dormer is pursuing steps forward and tells him that he witnessed him shooting his partner. Now Dormer must rely on the very person he is trying to put away to keep his terrible secret. The killer attempts to try to frame another person for the murder of the girl by planting evidence, all with the help and full knowledge of Dormer. These actions mirror Dormer’s case in LA and bring him full circle. He realizes that his actions have repercussions and that he is in over his head with his partner’s murder and his involvement with the girl’s murderer.

There are supposed to be all sorts of conflicting emotions here, but Pacino can only seem to muster one. It’s a shame, as this could have been a great opportunity for someone else to explore the complexities of the situation and really flex their acting muscles. Instead, we just get the some-old, tired Pacino. As the film draws to its conclusion, I also expected some sort of cool twist, or intellectual jog at least, but the same sucky gunplay ruins what could have been a good ending to a movie with a lot of potential, but not enough execution. Those damn Norwegian adaptations will screw you every time.