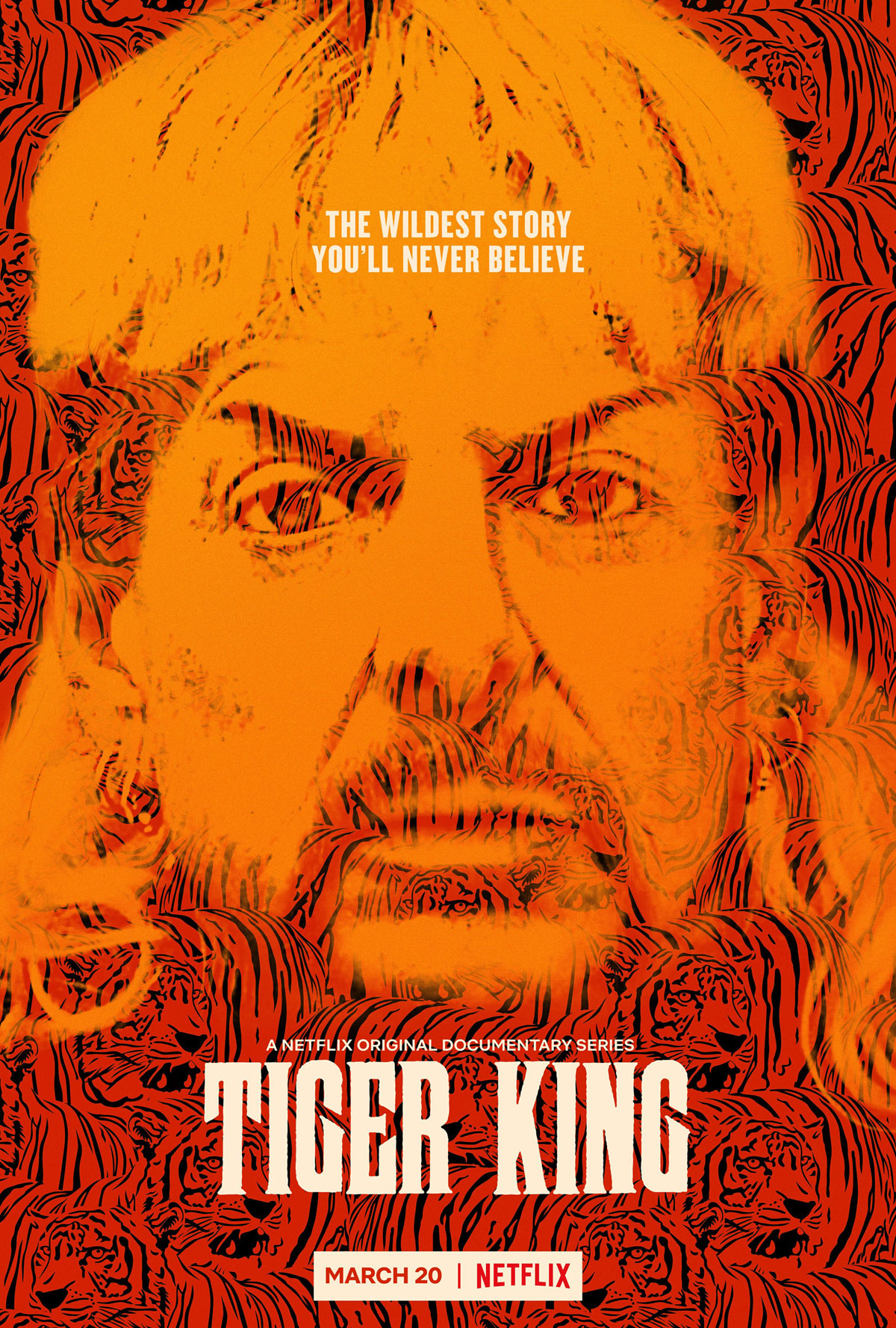 I knew Tiger King as the podcast, Joe Exotic, before I knew it as the phenomenon it’s apparently become. That is, I knew it as the podcast trailer and not a full podcast because I decided, after hearing it, that I’d had enough Wondery true-crime podcasts in my life. Seems I made a poor decision. Because it turns out that this wacky-ass story is fun as hell. And apparently Wondery did a shitty job of describing just what an intense shitshow this whole thing is.

So, what do you get when you take a narcissistic, mulleted sociopath with a thing for big cats and film him every single minute of every single day? You get absolutely nuttery. Did I mentioned he’s also a gay polygamist country singer? In the middle of bumblefuck Oklahoma? Who runs a zoo. And employs a bunch of ex-cons and drug addicts, at least a couple of whom he took in at a young age and married? Yeah, that’s our main character. Did I mention he ran for the Governor of Oklahoma and actually thought he had a chance to win? And then, after not winning, ran for President if the USA?

Joe Exotic calls himself the Tiger King. Because he runs a zoo of sorts that has tons of tigers. Some lions. Some crocodiles. But mostly tigers. I’m not sure “zoo” is the right term for it. It seems more like a hoarding situation gone wrong. Essentially the man makes money by charging people to come to his zoo and take pictures with tiger cubs. And selling cubs to other big cat collectors. The cubs are where the money’s at. The adult tigers seem to be there just to make more baby tigers. And eat hundreds of pounds of expired meat form the Walmart dumpster. My math isn’t great, but I believe at some juncture he claims to have 130 tigers on his dilapidated-looking property. I can’t imagine they’re all there for breeding purposes given their numbers. So it’s unclear what the hell they do there all day other than cost him lots of money.

The thing is, the documentary would have been pretty interesting just getting into the psychology of this damaged dude and his big cat obsession. But we get to see some other freaks in the big cat community, including the guy who seems like he probably deserves the Tiger King title more than Joe: Doc Antle. Oddly, he is also into polygamy and is seemingly running what amounts to a Hindu tiger cult that entraps young ladies into his ponytailed world of Hollywood animal leasing and fake doctorates from fake Chinese foundations. He is as big a character as Joe Exotic, but, uh, way classier.

On the other side of both men is this woman, Carole Baskin. She claims to be a rescuer of big cats. But she somehow also has her own zoo. She seems to have the same obsession as those men, but poses herself as a non-profit and makes money through donations, volunteer labor and really strong social media (including millions and millions of views on YouTube). And her dead husband. The one Joe Exotic continually accuses her of killing and feeding to her tigers. She, in turn, makes her life’s mission to shut him down. Which culminates in a law suit that essentially attempts to bankrupt him. It’s a back and forth in which nobody seems on the level. They’re both showmen and both seemingly sociopathic. He’s just more outrageous about it, while she seems like a nice Midwestern lady. Who, once again, may have totally killed her husband.

Along with these folks is a completely nutty cast of characters that includes a legless dude who lost them in a zip-lining accident. An armless woman who lost it to a tiger. A guy who sneaks tigers into Vegas hotels to party with high rollers, hookers and third-tier celebs. And a bunch of other “big cat” people who would mostly seem at home in one of those compounds in Idaho or hanging out with South American drug lords. It’s a pretty unsavory bunch of weirdos.

But Joe Exotic is the star. His trials and tribulations with his zoo and his husbands and his battles with Carole Baskin and the eventual grifter who comes in and steals his money pit from under him. The bizarre lying and abuse that happens behind the scenes of these “zoos.” The constant financial and legal games that Joe Exotic plays with his people and his business to stay one day ahead of the law, the banks, the investors and Baskin and her new husband. And it’s all on camera. All of it. Stuff he wants you to see. Stuff he doesn’t. Because he has an actual producer rolling at all times both for his Web show and because the producer thought it would make an excellent reality show. He was not wrong. It’s all really exhausting.

The documentary itself benefits immensely from having footage of everything. Oddly, everyone involved seems to have given permission to be in in the doc. Even people who you’d think would pass for very obvious reasons. Granted, these are not the smartest people on earth. And a good number of them are doing meth. Which, to my understanding, doesn’t allow folks to make the best decisions. But it does make for a very entertaining program. There are a lot of twists and turns. There are a ton of quirky characters. And, of course, a ton of cute cubs. But mostly you wonder how these people can possibly exist in a world in which fiction couldn’t do any better. Seriously, the whole thing watches like some bizarre crime black comedy that you’d roll your eyes at if it weren’t real life.

It’s bonkers. But somehow they make you feel for this dude, who clearly did a bunch of bad shit, including animal abuse, fraud, theft, terroristic threats, slander and various other firearms and explosions violations. He’s a sad man who thinks he’s the smartest guy around. But it turns out, he’s the least smart of the big cat people. He’s the one who, at the end of the day, can’t escape his own sad history. His own unbridled and out of control ambition to be the Tiger King. The irony of him ending up in a cage himself is not at all lost on the audience, but even in his fall he is resistant to the realist of his own existence.