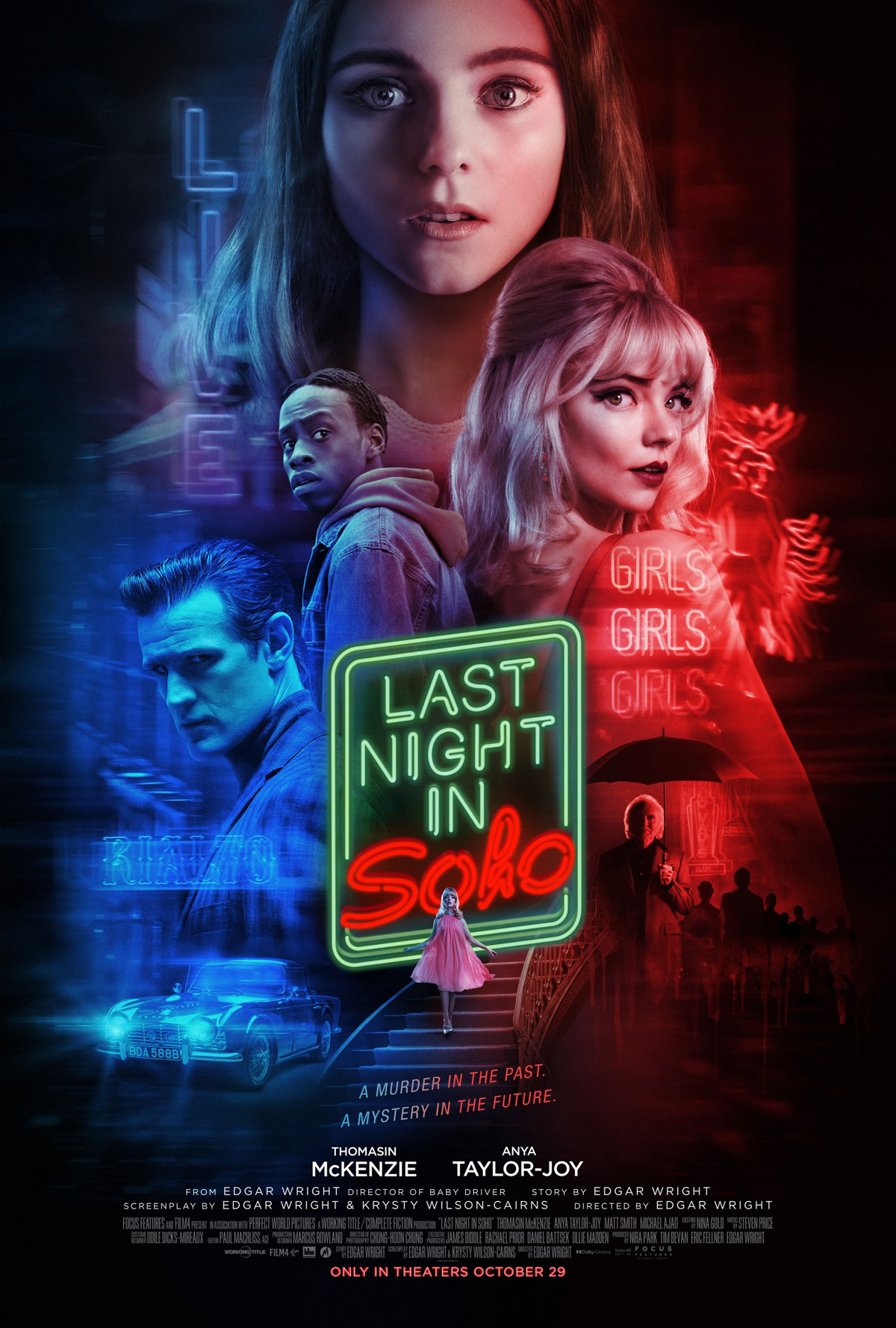 I’m confused. Because I thought at some point that Edgar Wright was a good director. Or a serviceable one when he isn’t being too gimmicky. Or tonally inconsistent. But I realize that I’m basing my love of his movies primarily on Shaun of the Dead and the always thrilling Scott Pilgrim. I’m less high on Hot Fuzz, The World’s End and Baby Driver. Point is, I have about a fifty-percent success rate in the Wright-a-verse. But whatever the percentage, I will always watch his stuff because there is the possibility that there will be some cool visuals, some fun musical interludes and just some interesting choices. Gimmick or not. And it seemed that Last Night in Soho had a lot of the earmarks of his good stuff, but also some of the red flags of his more indulgent nonsense.

The biggest issue here, frankly, is the story. How do I put this? It’s kind of fucking stupid. Not stupid like The World’s End, where a bunch of middle aged dudes want to complete a bar crawl that they were never able to complete when they were young. That shit is stupid on purpose. This shit is stupid by accident. I think. Because it seems that either the screenwriter thinks we’re dumb, or else the machinations are so clumsy that all of the “secrets” are pretty much given away within the first couple minutes of the movie. It’s not as if this is necessarily posed as a mystery, I suppose, but I don’t think they intended the ta-da! in act three to be so obvious from jump. And it’s because of the obvious nature of what’s going on that them pantomiming surprise and kind of skulking around and teasing the “twists” in plain site makes the whole thing feel like an amateur magician at a kid’s birthday party. We can totally see the dude palming the ball and the hanky up his sleeve, but we are still forced to clap when he finishes the trick out of courtesy and pure cringy embarrassment for him.

What on god’s earth are you talking about, Mr. Hipster? How to explain… There’s this young woman, Ellie (Thomasin McKenzie), in a small English town who really loves oldie-time stuff. The 1960s, to be exact. But like the London, Austin Powers ’60s. Not the dirty hippie ’60s. Her mother committed suicide, so she is growing up with her grandmother, who obviously lived during that time period and shares a love of that period’s music, etc. Ellie applies for and is accepted into a fashion design school in London, so she packs up her modest collection of self-designed and self-constructed clothes and heads off to the big city. Only to be met with way more sophisticated, wealthy modern students with whom she has little in common. Ok, fine. We’ve established this fish-out-of-water thing. But we’ve also kind-sorta established that Ellie has some shit going on. Mostly that she sees her dead mother — who was also a fashion designer — in the mirror sometimes. Because, horror, I guess.

Unhappy with the partying and stuff in her dorm, she leaves and takes a room in a house owned by an old lady. Not to nitpick, but having just sent a kid off to college, she ain’t getting that housing payment back. Which would leave her most likely unable to pay for this room. But, whatever. That first night, she has this dream where she is this wannabe singer in London in the 1960s she adores so much named Sandie (Anya Taylor-Joy). And — what! — in the morning she wakes up to find that she has a hickey on her neck! Yes, it’s super-spooky. I guess. But, honestly, why? Like besides her occasional run-in with visions of her dead mom in the mirror, we are given no indication that she’s clairvoyant? Or a medium? Or whatever this is supposed to be. And therein lies the problem. What the actual hell is going on? We get she loves 1960’s London, mainly, as we understand it, because of the music and the fashion. But why now is she actually inhabiting the body of some rando aspiring singer? She has no singing aspirations that we’re aware of. There’s no real explanation of why this is happening. We just kind of jump into it. And it’s weird.

The horror element here is also janky. These dreams sorta-kinda start bleeding over into her waking life. Apparitions of men who take advantage of Sandie start haunting her. It’s unclear if they’re actually dangerous, just in her head or what. But this whole thing sets her on the path to find out who Sandie was and what happened to her. Thus the mystery part. But the mystery is not at all mysterious. At least not to us, the audience. So it’s not exactly clear to me if she is just supposed to be clueless and we’re supposed to be in the know, or if the whole thing is just treated clumsily and it’s all just obvious by mistake. I’m 99% sure it’s the latter. So as Ellie is being haunted and trying to unravel the mystery of Sandie, I’m sitting there like… Uh, is this a bad ghost story, or a bad mystery? Or kinda both? I think the point of this is supposed to be, “Hey, things are not always as glamorous and amazing as you’ve built them up in your head.” But that’s an odd basis on which to gamble lots of studio money. So that leads me to believe that there is no point to this movie. And that Wright just thought the cool style of ’60s London, mixed with some decent music (which there always is in his films) and a couple very magnetic performers would make for a great film. But when things are all style and no substance, it shows. And this one just kinda bummed me out on that front.