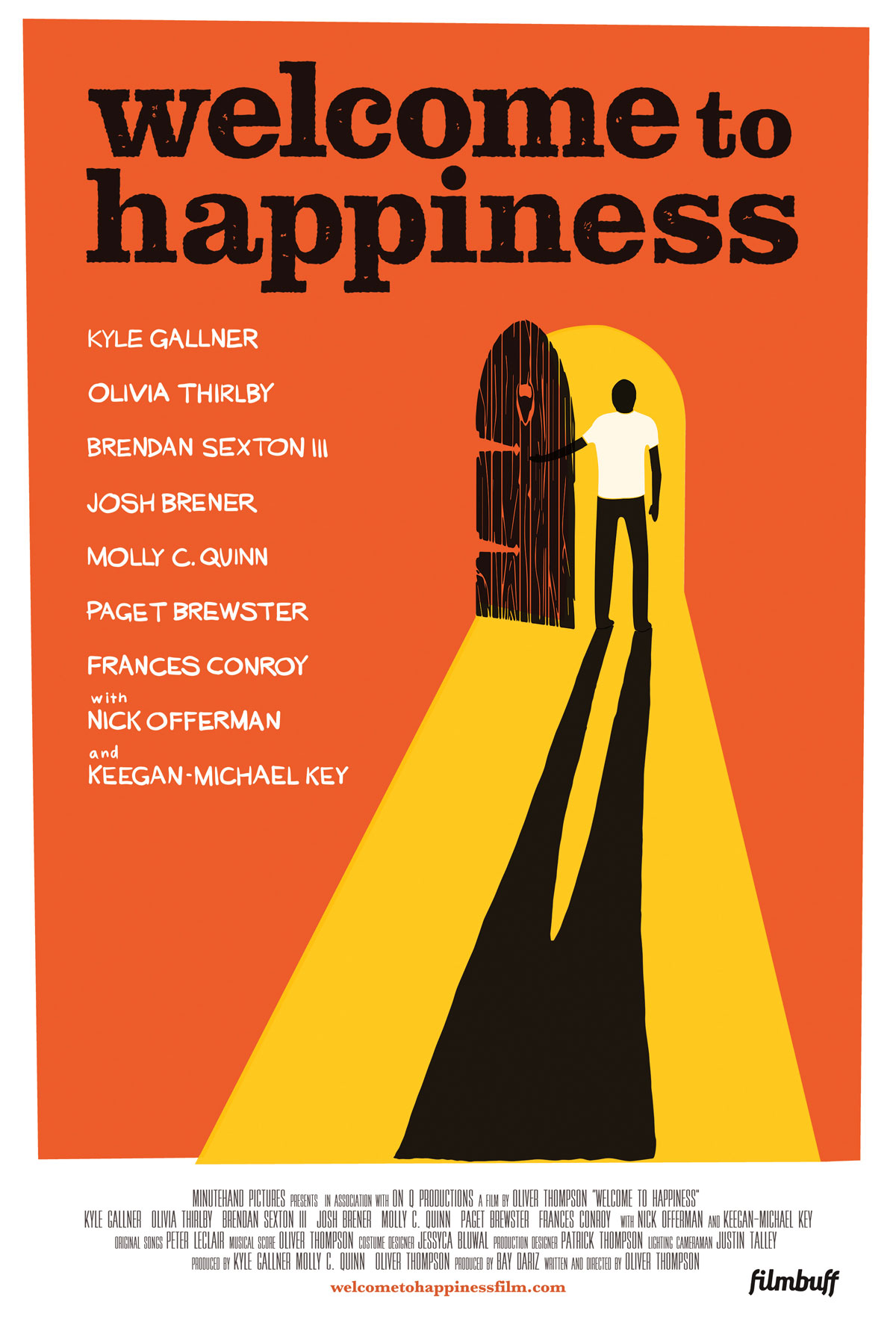 Oh, indie film. I know it’s not a genre in itself, but there is a look and feel that just screams indie. It’s that naturalistic sound, mix of comedy and drama and, of course, a dash of weirdness. In the world of superheroes, horror and the occasional literary adaptation, these little personal journey films like Welcome to Happiness are a nice departure in a back-to-the-90s future kind of way. A pleasant tale of magical realism that only sort of makes sense, but is entertaining enough that you don’t really care.

I’m not sure you’d call this film “high concept,” but it’s certainly on the magical realism spectrum. Sort of. This dude, Woody (Gallner) lives in a weirdly painted apartment in what looks like the San Fernando Valley. He’s a children’s book author struggling with his latest book, but he has a side gig. And that involves welcoming strangers into his apartment, subjecting them to three random questions that he receives via dot matrix printer, making them visualize a color while squeezing a stone and then ushering them through a tiny door in his closet. It’s all very indie.

The thing is, he has no clue what happens to those people once they go through the door. Other than he understands that whatever happens in there will make their lives better. But he can never ask because they enter the closet and never emerge. And, like I said, this somehow isn’t a horror movie. But it totally could be with a pretty minimal rewrite.

While Woody is doing his thing, we see a couple other characters who we know will eventually end up at his door. Or at the home of Keegan-Michael Key, who is somehow associated with this closet door thing, but it’s a little unclear how. He’s just some weird, quirky — but also magical — dude who buys random baseball cards and has a ginger assistant who lives in a tiny house on his property.

The tension here is that Woody has taken on this shaman-like side gig, but with little t0 no reward other than hoping that what he’s doing is helping people. After serendipitously running into a woman on the street who had gone through the door (proving they don’t die some hideous death or get transported to Mars or something), he starts to question why all these randoms get this awesome perk of what he understands to be reversing some awful thing in your past while he’s stuck being blocked, lonely and missing his dead parents.

I’ll stop with the plot so as to not give too much away, but the movie is snappy and short and keeps things moving along pretty well. Gallner, who plays Woody, is actually really good in the part. He’s a weird mixture of Alex Winter from Bill and Ted’s and a much kinder Jeremy Renner. I don’t know if I buy him as a former decathlete, but what do I know? The rest of the cast is equally good. Key is his usually spazzy self and Nick Offerman is Nick Offerman. Brendan Sexton continues playing the parts that would have otherwise gone to Joaquin Phoenix hadn’t he found a magical key to fame under a rock somewhere. But with a better beard.

This thing isn’t going to change lives by any stretch, but the acting is strong and the story is just oddball enough to keep the entertainment going. I can’t say the “message” of “all things happen for a reason” is quite on point, what with them forgiving a murderer with this tossed of philosophical whatever, but we’ll assume they had to find a tie to all the things that happen in the movie and just kind of settled on that. It’s like some hippy universe shit, I suppose. But the whole movie is kind of that way, but couches it in a nice little narrative that is perfect for that plane ride you’re planning next month.