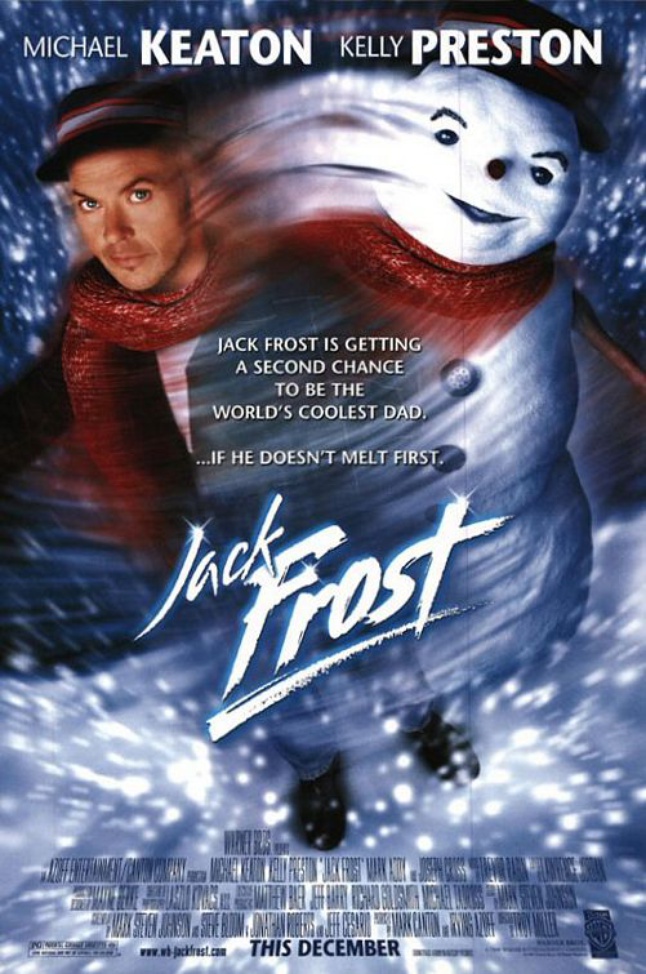 Sometimes there are movie concepts that are just too lame to be true. Then there’s Jack Frost. Basically Michael Keaton is in the movie for five minutes, dies and comes back as the voice of a giant animatronic/computer-generated snowman. Cool concept, right? Keaton plays your typical big-hearted, well-meaning father who tries to do the right thing but always ends up screwing over his wife and kid. He doesn’t show up to his kid’s hockey game, he misses the special dinner with the wife (Kelly Preston) and generally acts like an immature fuck-up. So, in typical movie fashion, Keaton is right on the verge of finally making the right decision for once, and he dies without anyone knowing that he was finally going to make the ultimate sacrifice for his family: giving up his one shot at fame to be with his wife.

Famous for what, you ask? Somehow he and his drinking buddies were going to be signed to a huge record contract. Their band, which is a lousy Bruce Willis Return of Bruno-ish-sounding blues band, is somehow discovered in one of the dive bars they play in. It’s all kind of ridiculous, really. So Keaton comes back a year after his death as a snowman in his family’s front yard. Why a snowman? Because his name is Jack Frost, of course. Honestly, it makes no fuckin’ sense. The writers had to think of some device that would give Jack a time limit to make his son understand how much he loves him. So, when it gets warm out, Jack’s a puddle.

So, of course, nobody believes the kid that his dad is a giant talking snowman. Everyone, including his mother, just thinks he misses his dad and is making things up. Of course, he’s not. And this is where the message gets garbled. I understand that the movie is trying to show how people cope with the death of a loved one, but what if that loved one neglected you when they were alive? I’m sorry, but people don’t get a second chance to come back and set everything straight. The guy was an absentee father when he was alive, so why does he get to make up for it now that he’s dead? What kind of message does this send to grieving kids? It’s okay your asshole dad’s dead, he’s going to come back and treat you much nicer when he’s transformed into a snowman, or a roach or whatever.

I never saw Ghost Dad, but I can only assume that the two films have some overlapping themes. Actually, the scariest thing about this movie isn’t the thin plot, the fact that the kid doesn’t piss his pants at the site of a talking snowman or Michael Keaton’s horrible singing. It’s the snowman himself. I’m not sure who the graphic artist is who created this monstrosity, but it will probably be a long time before he works again. The thing is creepy and homicidal looking. Sometimes sentimental is good, sometimes it’s effective, but sometimes it’s just plain stupid.