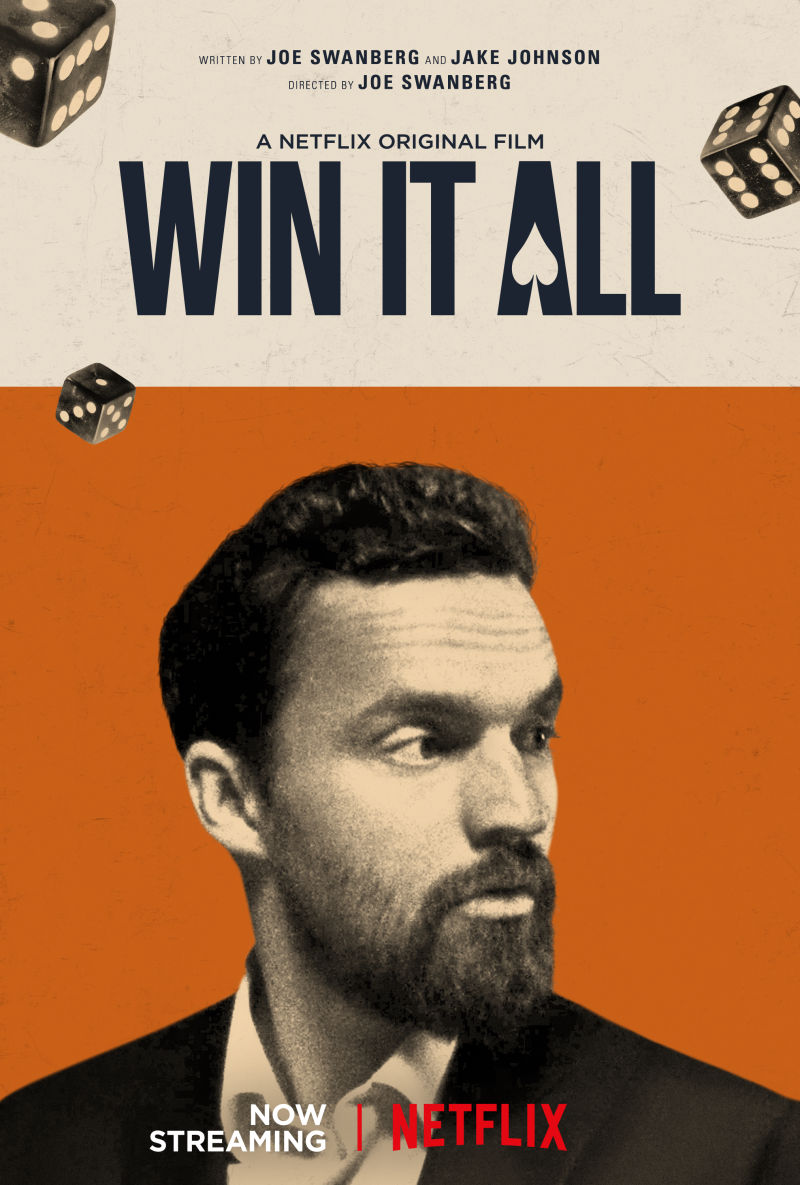 It’s funny. Win It All is an utterly predictable film. Which, in the land of the indie film, makes it an anomaly. Add to the presumed tension the gambling plot and you have what you’d assume would be a life-lesson movie about letting greed, ego and addiction get the best of you. Or so you’d think. So you sit there and you wait and wait for the worst to befall Jake Johnson’s lowly Eddie character — and it just doesn’t really happen.

The set-up of a scary-ass con coming to Eddie’s apartment to drop a bag with him while he serves time in the pen certainly sets up for the worst. Because we know from the nanosecond that the con says, “I’ll give you $10k to hold onto the bag — just don’t open it,” that Eddie is gonna open it. It’s a plot device as old as time. And when you drop a bag full of what turns out to be tons of money (and some other weird stuff) at the feet of a gambling addict, what else is he gonna do but gamble? Thing is, I’ve seen a bunch of these movies, and they follow pretty much the same pattern. There is desperation that leads to a situation that opens opportunity. That opportunity leads to success, which is ultimately squandered because the gambler at the center of this plot can’t help but slide back to his resting state of being a loser. This film pretty much does that. Never leaving well enough alone is a hallmark of the gambling movie.

Unlike those other films, though, the level of distress and focus on the skills of the game and the need to win seems much less urgent. It’s unclear, watching this, what it is about cards that Eddie really likes. He’s not the passionate practicer or cheater or obsessive card shark we’re used to seeing. From what we can tell, he’s less addicted to cards or gambling than he is proving he can sustain his loaf-ish lifestyle and just needs the cash in order to fulfill that stubborn conceit. Sure he gets worried and pissed when he loses, but that’s just because he’s that much further from proving he can forever be the adolescent, living hand-to-mouth. That is compared to his “responsible” brother, who took over the family landscaping business and has a home and a family and all the trappings a man of a certain age generally aspires to have. So when Eddie blows his money (and some of the con’s) he is laid low enough to go to his brother to ask for an honest-to-goodness job. And he finds what feels like an honest-to-goodness girlfriend, who has a child and everything! And all of a sudden, all the things he had eschewed end up coming into clear relief, and his life starts, in essence, to turn toward what feels right.

But, of course, we have act three of the gambling movie. Success is short-lived and the something in the gambler that thinks, “Man, if I could just do this thing one last time I could get out of the game and be good!” Of course that’s the typical shortcut we see our addicts fall into. And Eddie is no different. So he puts everything on the line so he can go straight from schlub to responsible adult with all that comes with it. Granted, he has some motivation in a plot twist that, again, we saw coming from minute five. Urgency and all that.

The amazing thing is that what we think we’re going to get we don’t get. Because we forget sometimes that comedies don’t always have to be tragedies. That movies — even indie ones — don’t always have to end in an unexpected shootout or downcast British song from the 80s. Our protagonist is allowed to technically “win it all.” What we don’t know, though, is what the definition of “winning it all” means. And, yes, our hero does evolve during the course of the film, so that Eddie at the beginning of the movie has a vastly different idea of what winning means than the Eddie at the end.

On a personal note, the most amazing thing is that I actually watched this film at all after swearing off Swanberg movies only a couple months back after suffering through Digging for Fire, which was atrocious on almost every level. Perhaps it was Johnson’s more mainstream proclivities in his writing (and the fact they actually attempted to write a script rather than ad-libbing everything) or Swanberg growing up or angling for a superhero movie, but this is definitely a step in the right direction in my mind. Being scared of plot — or allergic to it — is all well and good if you want an audience of three to enjoy your films, but, like music, there is absolutely no shame in trying the verse, chorus, verse thing every once in a while. Hopefully Swanberg even grew to like it a little and maybe will even pay a professional to make his poster next time!