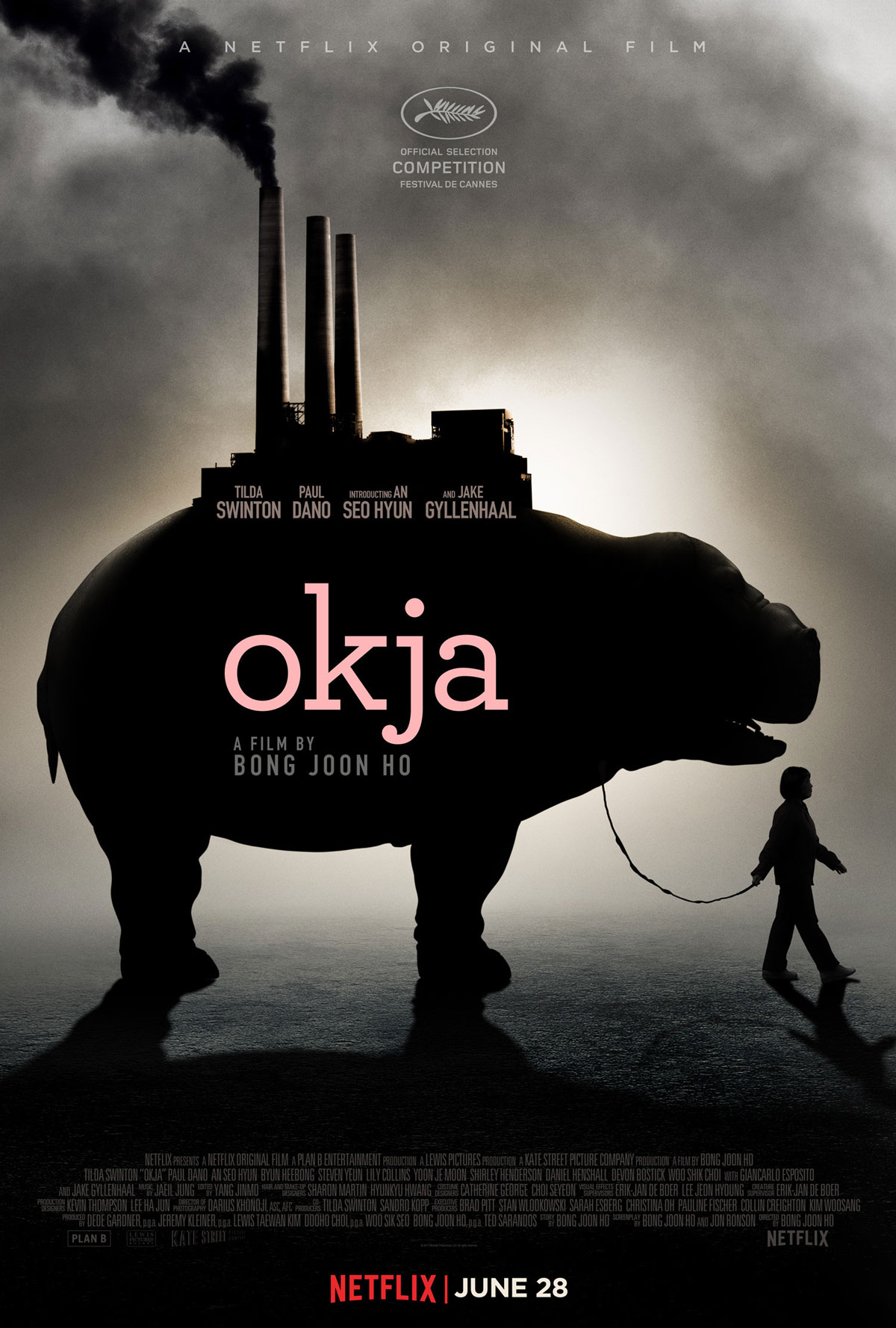 Apparently this site has just become a Bong Joon Ho tribute site of late. But, my god, this is a strange movie. It’s all over the place in terms of tone and approach. At times it’s a black comedy and fantasy adventure, but is clearly also a “message” movie. I’m just not quite sure what that message is.

I suppose I’ll try to explain what’s going on here. There is this company that does something that maybe involves meat production? Although that’s never really clear. The new CEO and self-styled environmentalist of said company, Lucy Mirando (Tilda Swinton), announces that they’ve found this amazing super pig in some village in South America. In order to introduce said super pig to the world, they’re sending 26 of them around the world to different farms to be raised. And in ten years, they’ll announce who raised the best super pig. I know; what the hell, right?

So one of those pigs is raised in the mountains of Korea for ten years by an old man and his precocious granddaughter. That pig is named Okja. For some reason this blue ribbon panel of judges from Mirando show up in person to this isolated farm for the first time to check out Okja only days before before the winner is announced. The pig has some electronic surveillance info that it carries around, so biodata has been sent back to the corporation, but whatever. As we know is going to happen, Okja “wins” and is taken from the farm to be paraded around as the best pig for the company.

Now, what is a super pig, you may ask? It’s essentially a pig that at different times seems to be either the size of an elephant, but at other times looks to be about the size of a hippo. Whatever the case, what or why would a company raise pigs? Duh, for bacon and pork chops. This never dawns on the girl somehow. And seemingly never dawns on anyone else either. I mean, c’mon. It’s a pig. And I understand that Okja is specifically the little girl’s only friend and is demonstratively very smart, but nobody in this endeavor should be surprised that a company that presumably manufactures meat is growing giant pigs for… meat.

And so begins the adventure. The young girl chases Okja around the world trying to get her friend back. In the mix is an oddly toothless animal rights organization that actually has the same name as a very not toothless animal rights organization, ALF. Its leader, played by Paul Dano, is a strange mixture of competent leader, weirdo goofball and violent crazy person. It’s also unclear what exactly their motivation is, how big their organization is and how they’re able to pull off some of the things they pull off.

Tilda Swinton does her characature Swinton thing, wearing fake teeth, doing a wacky accent and just being a general crazy person. Not unlike her character in Snowpiercer. Depsite its clownishness, it’s always fun to watch her. But Gyllenhaal, who plays what amounts to a super-amped-up Steve Irwin, is unbearable. He talks in this high voice and is constantly moving and contorting his body and face in a really uncomfortable way. I have no idea if it was his choice to be this annoying and horrible or if Bong told him to be that person. He ends up feeling like a cross between Steve Martin from The Jerk, Ace Ventura and Rip Taylor. It’s horrendous and ruins large sections of the film.

The narrative wends its way from a Pete’s Dragon feel, through bio terrorism, to a commentary on modern marketing, to this kind of dystopian alternative future thing that ends up reminding me of Delicatessen or some such Euro film. It’s all pretty scattered and disjointed and very, very curious. Like Bong’s other films I’ve seen, he seems more interested in exploring themes than his narratives making much sense (ignoring how people and things move through time and space), but they are always thought-provoking and interesting to look at. There are so many plot holes that it’s not even worth going into. So if you don’t care much for technical detail or realism, this is your kind of film. Also, if you are a meat eater, you may change your mind after this. And maybe that’s the whole point after all.