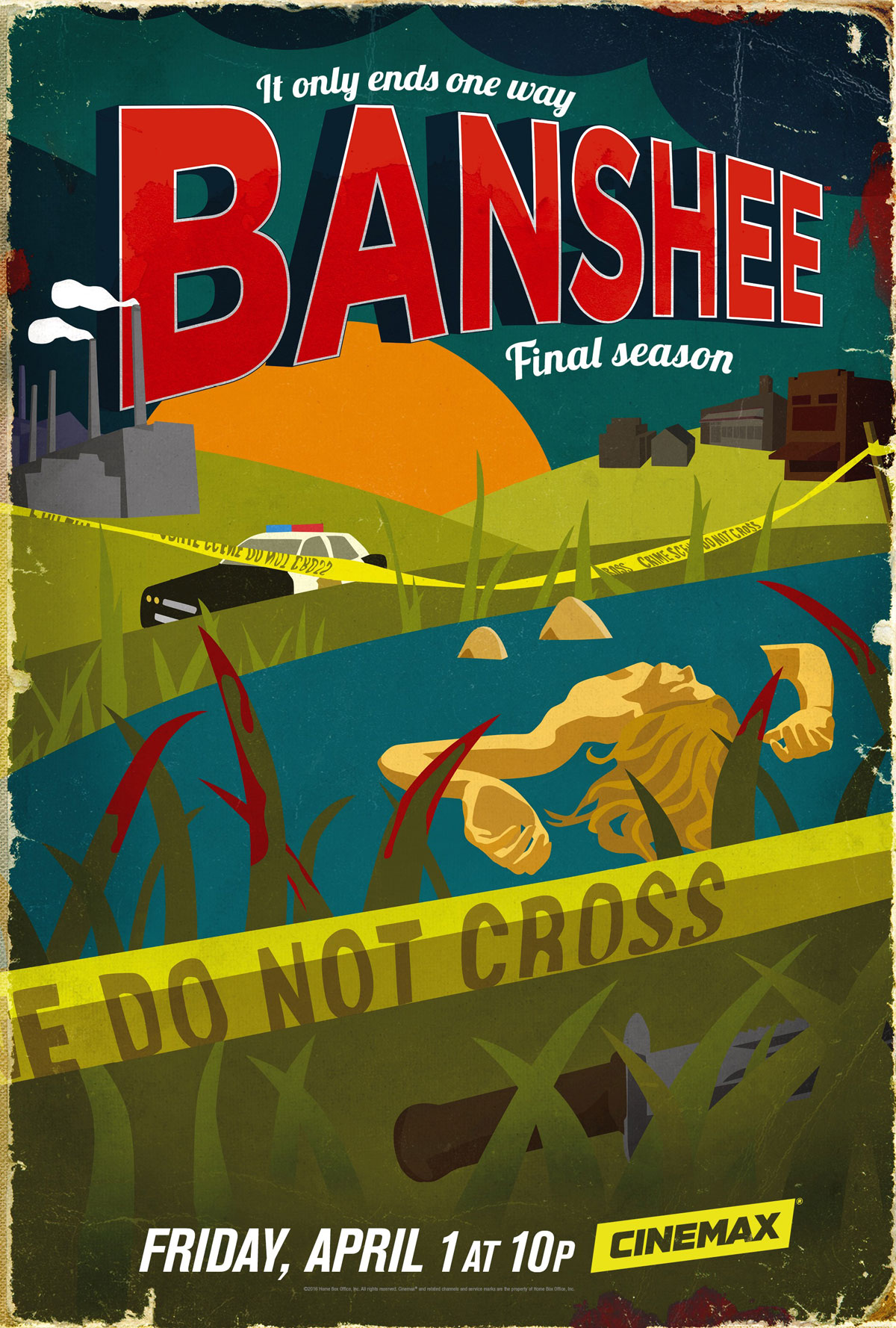 While watching Banshee, I found myself asking this litany of questions on a fairly regular basis: Are we supposed to be taking this seriously? Is this farce? Is this supposed to be hammy and over-the-top and completely, insanely ridiculous? After four seasons, the answer remained unclear. After all, the series was produced by Alan Ball, creator of the awesome Six Feet Under, but also the uneven and also absurdly silly True Blood. And while Ball didn’t create this series, as he did those others, it certainly had a lot more in common with the True Blood than anyone could point to as coincidence. In fact, I’d say it mirrored the sex, violence and complete disregard for narrative continuity pretty closely. Even if it had absolutely no vampires or creatures of the occult.

It seems that Banshee couldn’t quite escape its Cinemax pedigree, either. After all, Cinemax didn’t get the nickname Skinemax for nothing. It was the network that adolescent me (and everyone else lucky enough to have premium cable in the 1980s) could tune in to to watch the French soft-core porn Emmanuelle series of films. They were dubbed into bad English and gauzy and just absolutely terrible. But, hey, they had lots of mysterious, foreign sex. It was in those films that Cinemax found its place in the market and expanded into original soft-core programming about sexy cops and sexy co-eds and sexy radio DJs. You get it; there were lots of adult situations. And boobs. So, I suppose in order to ease people into its first real foray into a “premium” drama/action, Cinemax couldn’t totally pivot away from its core constituency and its defining touchstone (so to speak): sex.

So, as you can guess, there is a lot of doin’ it in Banshee. In the series and in the fictional town in PA after which the series is named. Every time a new female character is introduced, Ms. Hipster and I would turn to each other and ask who we think she’s going to have sex with. And I’d follow with a quick: welp, I guess we’ll get to see what she looks like naked! Sometimes with probably a little too much zeal for her taste. But, seriously, it did feel like many of the woman were thrown on screen only to serve that purpose. This is a very small town in the middle of nowhere, Amish country that seems to have a very high percentage of beautiful women. Is it realistic? Not at all. But, hey, this is television. Anyhow, I suppose they were just giving the people what they want.

The only thing that happened more than sex is violence. The show is incredibly creative with the ways they maimed and killed people. There are compound fractures, tons of garroting, lots of people thrown onto sharp objects, decapitations, explosions, throat slitting, neck breaking, at least one person sort of drawn and quartered, tons of bullets, dropped from heights, burned alive, hatcheted, stabbed, suplexed to death and so many manual strangulations I lost count. Honestly, I wish I had counted the number of times a character grabbed another character by the neck and tried to choke the life out of him/her. It happened at least 20 times an episode. It feels like the Carrie Hopewell (Ivana Milicevic) character alone was choked by every character on the show at least once. The violence is pervasive and completely crazy. Just like the new woman = new boobs thing, we know as soon as a new, large dude shows up on screen that Lucas Hood (Antony Starr) is going to have to fight and kill the dude in some new and disgusting way.

Notice I haven’t gotten to the plot of the show yet? Well, that’s because it’s not really that important. But basically Antony Starr’s character gets out of prison after fifteen years and immediately makes his way to Banshee, PA to find the woman whom he loved before being sent away. That woman, Carrie Hopewell, is now renamed and married to Banshee official, Gordon Hopewell (Rus Blackwell). Coincidently, Starr’s character is in a bar when the new town sheriff, Lucas Hood, moseys in the day before he’s supposed to start the job. A fight starts in the bar, Hood is killed and Starr’s character sees his opportunity and steals Hood’s identity and becomes the sheriff of Banshee! Yes, the criminal becomes the law, and in doing so gets to hang out in the town where his old girlfriend and criminal partner, Anna/Carrie, now lives. Man, what a break. Hood is instantly pitted against the town baddie and incestuous ex-Amish weirdo, Kai Proctor (Ulrich Thomsen), and his criminal syndicate of drug dealing, prostituting, gambling and general menace. This town has some serious problems, and a body count that would make 1992 Sarajevo blush. Yet, somehow, the state police and federal forces don’t come in after fire fights seemingly break out daily between the cops, the crime syndicate and even the Native American tribe in the area. Let alone when they get a local military base involved. It’s truly absurd.

So the four seasons are spent following the struggle between Hood and his criminal tendencies and his new-found love of being a law man. A law man who shoots first, asks questions later and refuses to do any paperwork. He beats confessions out of people, tortures prisoners and is generally way more gangster than cop. But he gets the job done! On his non-cop team is the town bartender and former boxing champ and ex-con, Sugar Bates (Frankie Faison) and cross-dressing, cyber genius, Job (Hoon Lee), whose accent seems to float somewhere between Yosemite Sam, Scent of a Woman-era Al Pacino and the drill sergeant from Full Metal Jacket. And, of course, his old flame, Carrie, who is balancing her time between being a terrible mother, secretly continuing her training as a ninja and plotting the murder of her father, Rabbit, a Ukrainian NY crime lord and former employer of both her and Starr’s never-named character.  The show clearly wanted to do a heist-of-the-week thing with this small crew when the series started, but after a couple they mostly abandoned that idea, as it made no sense for this dude who is now the sheriff to also be pulling heists in and around the same town he’s been asked to protect. Juggling that dynamic was just was too high of a bar to keep up narratively — even if logic and reality never seems to be a concern at any other point during the series.

Now, understanding that this show is absolutely stupid, it is also a lot of fun. The action scenes are often terrific. The way they’re shot, the stunt work, the choreography and physicality is often super-impressive for a TV show. If you put aside your sense of how space, time and relationships work, this is four seasons of brainless good times. And, yes, some storylines go nowhere. And, yes, there are way too many strange choices when they go to flashbacks or “memories.” There’s also a whole thing with an obese dude (who is really just a not-so-obese actor in an obvious fat suit) in a rolling tractor trailer dressed up to look like an office that is such a sidetrack that it seems in retrospect like a fever dream I must have just made up. There are a few of those things, in fact, that are clear attempts at expanding the world outside of Banshee proper because they understandably have limited sets and limited storylines to offer up inside of small-town PA. You can feel the poor writers struggling a bit, but when one of them ends up in a giant shoot out with a killer priest in a gothic church in “NYC,” I suppose it’s all worth it. Even if it feels at time like a pared-down, Pennsylvania version of John Wick. Ultimately, this is not high art. This is not prestige TV. This is fun action stuff that — when you just sit back and appreciate it for what it is — makes for a pretty wild ride.