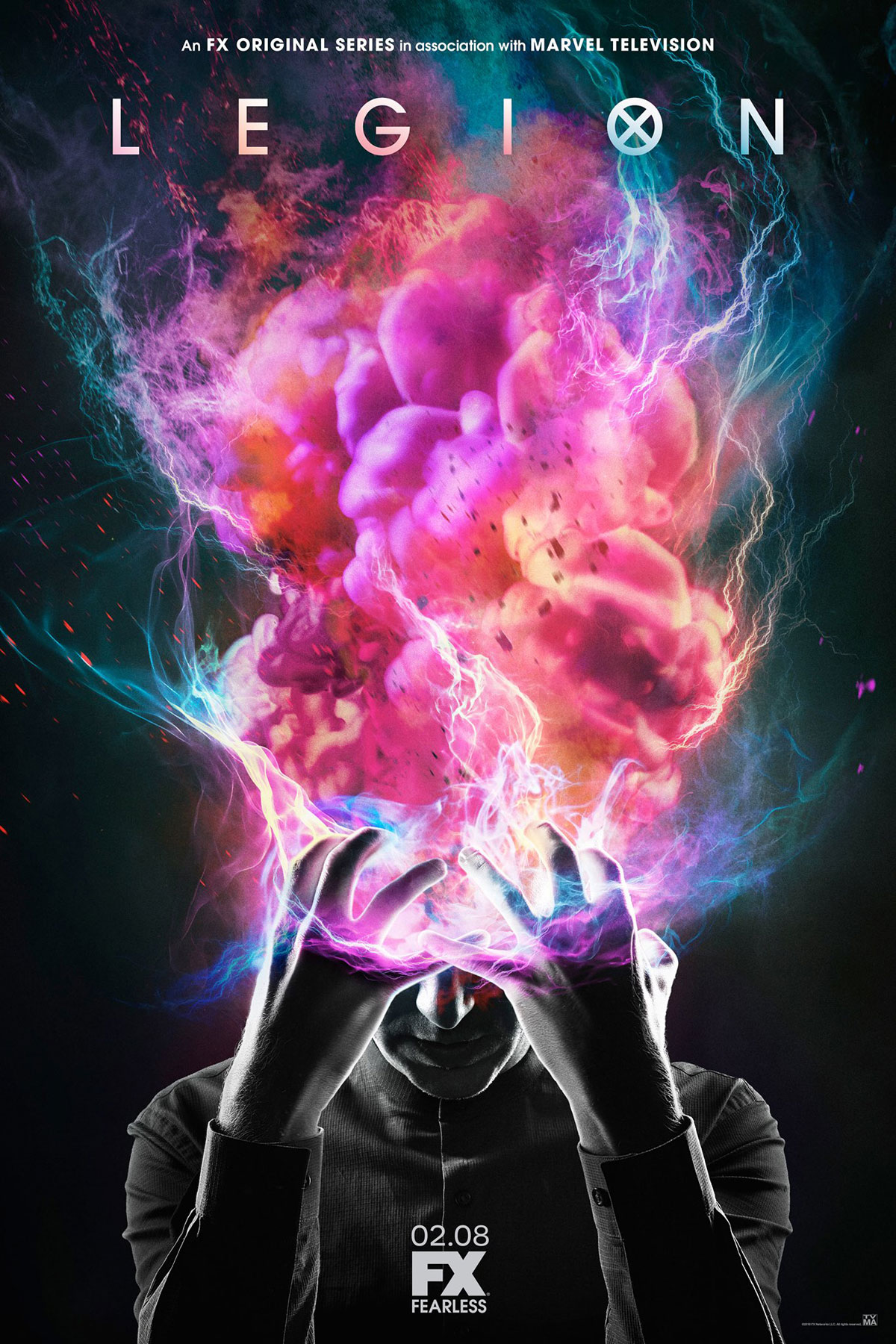 Legion is apparently more Marvel superhero shit. And, as the two of you who have read my site know, I generally don’t like superhero shit. Yay, let’s watch a bunch of giant aliens and whatnot beat up on NYC or crush the Tower Records Building or Hollywood sign. And maybe we’ll get some origin story about murdered parents or an industrial or military accident. And then I’ll blow my stupid head off from boredom. But, Jesus, did this show throw me a curve. I mean like took my brain and shook it until it cried mercy and then pried it from my head, threw it in the dirt and stomped and spit on it. But in the nicest, most artful way.

Mind fuck. That’s what this show has going on. Sure, there’s some action and some quirkiness and a couple laughs, but this thing delves into the psyche of its main character, David Haller (Dan Stevens), like few shows have before. Granted, most characters on tv aren’t mutants whose minds have been invaded by another malevolent mutant. I mean I watched all eight episodes and I honestly couldn’t tell you what the hell this thing was all about, but I think (I think) that was kind of the point. I’m not sure that was the original intention of the comic book from which this sprang, but my understanding is that Noah Hawley had very little connection, either personally or professionally, with the source material that created Legion to begin with. That’s odd, of course, considering the character’s pretty specific set of crazy-ass powers and twisty-turny abilities to warp just about everything around him.

The show itself feels like a set of Russian nesting dolls. There are realities inside of realities inside of minds inside of astral planes and dimensions and who the hell knows what else. At times it’s almost impossible to know what reality we’re observing or supposed to be looking at. To add to the disassociation, the timeframe of the show itself is skewed by the character’s costumes, decor and various other manifestations of what feels like it’s set in the late 60s or early 70s. Though David dresses like Stephen Malkmus circa 1996. Clearly the set designers and decorators had a ball scouring antique stores or old catalogs for that perfect, bright pop-art look that gave the whole show a throw-backy, dreamy quality that feels like perhaps it’s a memory and not something currently happening in our modern reality. Further pushing the 60s thematic is the incredible acid-trip, Beat-Club cinematography of the whole thing. It’s honestly as if The Matrix and a Blue Cheer studio performance had a lovechild inside the mind of Hunter S. Thompson.

So you’re probably asking yourself: how the hell does this make for a good show? And the answer is, I’m not quite sure. It’s been a couple days since the finale and I’m still not sure I loved it. In fact, I’m not even sure I liked it. I mean, I know I liked it, but I not sure I liiiiiked it. For instance, Ms. Hipster hated Aubrey Plaza. Like had to turn away from the screen every time she was on. Granted, she plays a pretty creepy character, but her twitchy, buggy, eye-rolling thing that she does (which we actually watched in Mike and Dave Need Wedding Dates a week or so before the finale) is amped up to eleven. Dan Stevens, who was apparently in that awful-looking Downton Abbey show that everyone’s mom loved, plays a man who is, himself, not particularly lovable, or even likable, at times. Granted, we’re not sure what is his mutant parasite, what is his mental illness and what is his general put-upon nebbishness. We do see moments of tenderness when he interacts with his new girlfriend, Syd Barrett (played by Fargo’s Rachel Keller and clearly named after one of the Pink Floyd founding members and fellow mental patient), but the guy is generally a live wire who is on the verge of exploding.

To describe the show is to essentially describe one long unfolding nightmare. And like most dreams or nightmares, there is very little logic, continuity or sense involved. I’m sure there is a map on some whiteboard somewhere that outlined and tracked the concentric circles and spiraling vortexes that make up the plot of this thing, but it is dense with metaphor and what I imagine are levels of psychiatric research and/or consultation that I can’t even begin to wrap my head around. I imagine even fans of comic books — or even fans of the original Legion storyline itself — had some problems following the incredibly dense world of the small group of mutant protagonists we see band together around David. There are compartmentalized pieces of narrative and really nice, little vignettes that involve some of the secondary characters, but the main plot line around David’s psyche is something that I had a really hard time untangling. So, I mentioned above that I’m not sure I really like-liked the show. The way I might like something like Atlanta, for instance. Well, no, I didn’t like it in that way. That shit was enjoyable on a weekly basis in a soul-satisfying way. Legion was something different. Every week I definitely looked forward to it, but to challenge my mind and to see how many times I would say “what the hell?” out loud to Hipster Wife. And though I’m still unclear where we ended up and where the heck season two might go, I feel like I might enjoy attempting to get there.