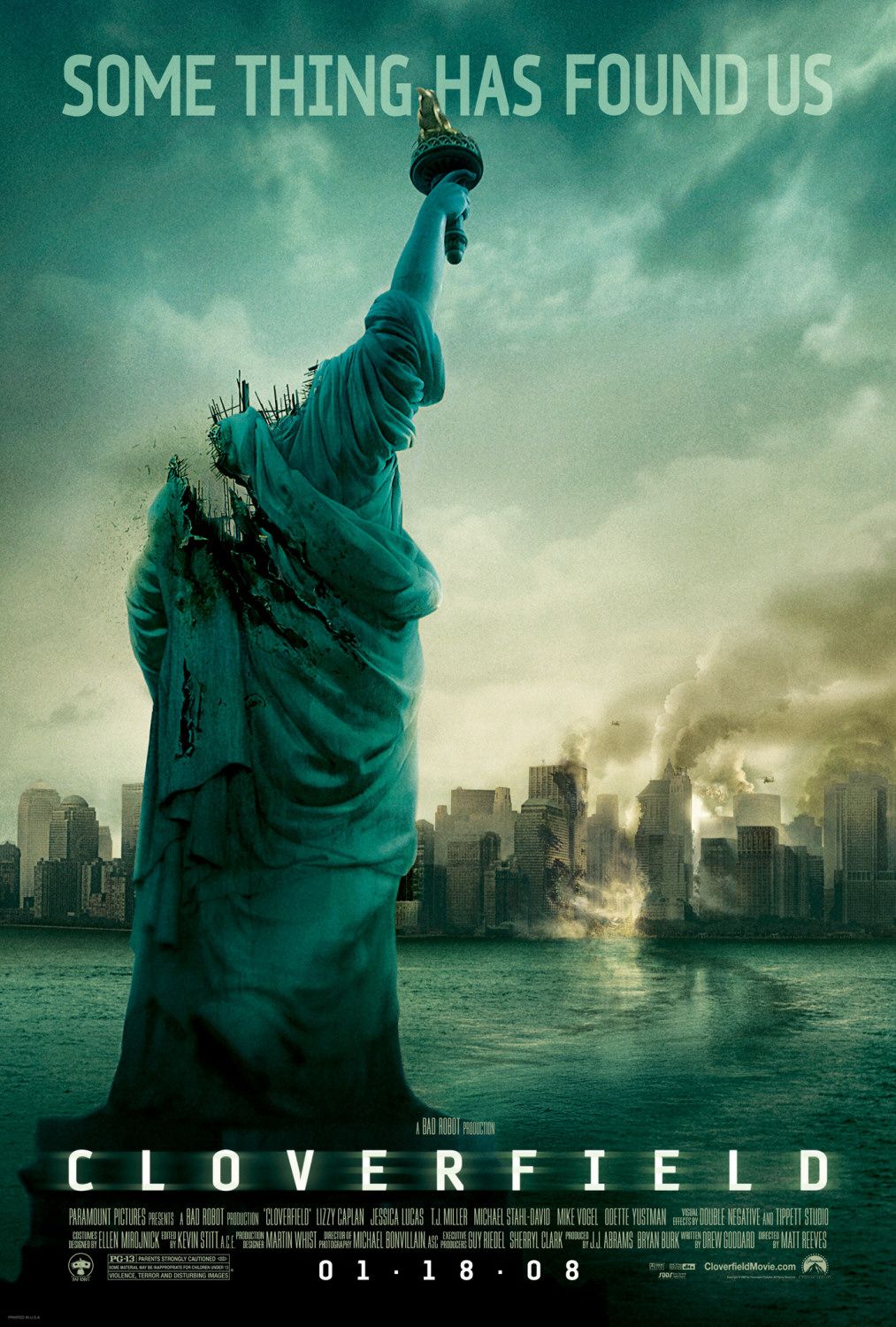 This thing became like the Blair Witch of alien movies. Hardly revolutionary, the first person, shaky digital video cam thing for some reason captured audience’s imagination. That, along with its connection to J.J. Abrams and a brilliant modern and viral marketing campaign, led to tons of hype and a huge opening weekend. Judging by how relatively fast the box office fell off, most were probably Abrams fans, or those just looking to figure out what the hell the mysterious posters and trailers were all about.

It turns out that this is just a giant Godzilla movie. Yes the mystery is a big-ass alien that crash lands on Earth and proceeds to destroy Manhattan while the army shoots at it and our protagonists run around the city with a video camera filming the action. The funny thing is that the movie starts off as an innocuous young adult melodrama as all of our characters gather at a going away party and we get introductions to friends and family and their relationships with one another. And, quite honestly, you end up just aching for something to blow up, cuz the dialogue and the people themselves are generally uninteresting and relatively stereotypical. It kind of feels like a Heineken commercial or maybe even Taster’s Choice or Olive Garden. And then they go up to the roof of this beautiful New York loft and a giant fireball lights up the sky and the shite starts.

As ash starts pouring into the downtown location of the party loft, Ms. Hipster had to turn away as it evoked the wall of soot thrown by the falling WTC towers. This may or may not have been intentional, but it’s almost impossible to watch any kind of disaster movie in Manhattan, especially one that mimics an actual occurrence so closely, without recalling that day. Of course this is a giant alien (and one that looks suspiciously like 1998’s Godzilla) and not a terrorist attack, but the ramifications are the same. So once our characters collect themselves and start to make their way to the New York City evacuation spot, we get to see more and more glimpses of what’s causing midtown to fall down.

All of the action is captured through what is supposed to be a hand-held digital video camera being run by a party guest who had, up until that night, never really used one. If this camera did indeed exist, I would run right out and buy it. Not only does it take amazing footage (100% of which is outside at night), the battery life is staggering and the thing can take explosions and 400-foot drops without a scratch. That and the fact it can take an amateur videographer and make him into an amazing cinematographer who can somehow run full speed from a giant monster and shoot a scene perfectly all at the same time. Ok, I’ll stop with the pickiness now… Oh, but apparently this video cam takes a tape, as we see interspliced scenes of what is being taped over; scenes of two characters having a wonderful day at a sunny Coney Island juxtaposed with the running and screaming and exploding that is going on in the new scenes. Despite this being pretty gimmicky, it’s actually quite effective at breaking up the volume levels and reminding us of the humanity amongst the explosions. These scenes become especially poignant as one of our main group decides he’s going to forgo the evacuation route and venture into midtown—right where the monster is — to try to save the girl on the tape, whom had already dissed him earlier in the evening and may or may not be alive.

Ultimately the look of the film wins the day, as does the no name cast of beautiful 20-somethings in peril. I don’t see a ton of monster movies, but this one is pretty entertaining and actually leaves you with a funny feeling in your stomach when it ends. I tend to compare everything to the movie Miracle Mile, but this one certainly evokes Anthony Edwards and Mare Winningham sitting in the sinking helicopter in the La Brea tarpits like none other since.