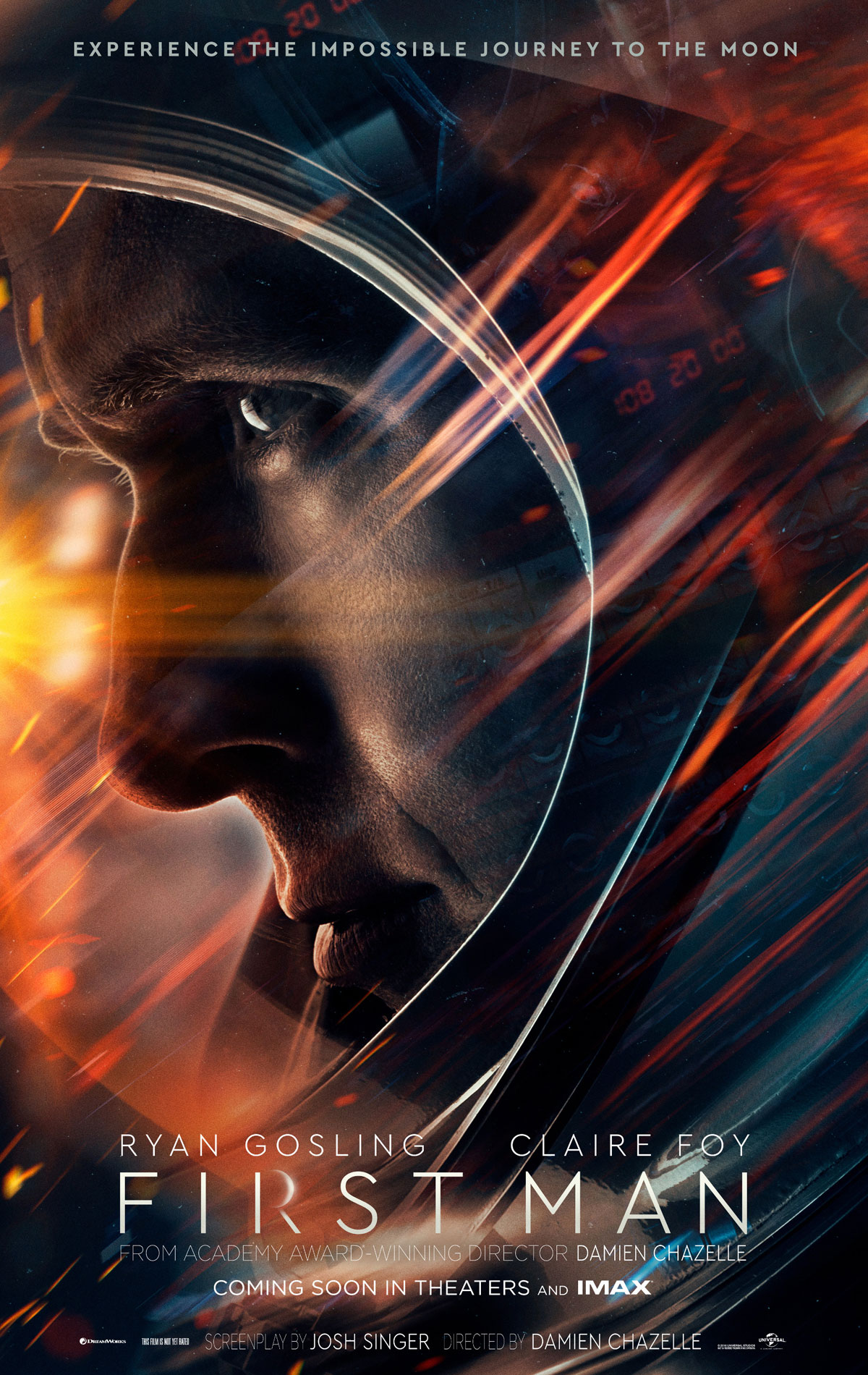 Take two in the father-in-law weekend of cinema. First we has a war film: Greyhound. Because older white guys like nothing more than WWII destroyers and subs shooting shit at each other. And while that was not exactly a rousing success with Hipster FiL, at least he didn’t scowl or ask why the thing was filled with so many hippies. So we figured we’d try out this spaceman biopic, First Man. After all, he was around when this stuff was going on and might be cool with some real-life drama, instead of torturing him with something a little more artsy, or one of Hipster Jr. Jr.’s Marvel movies.

Now, I have made my dislike of most biopics pretty clear over the years. They do all sorts of things wrong. But mostly they choose a POV and stick with it even if the facts don’t support the theory. Or they’re just really fucking boring. Both are sins that I just won’t abide. So I go into this one already pretty biased and not particularly looking forward to it. Sorry, Neil.

Space is scary. I think on that we can all agree. Shit, you’ve seen Gravity, right? And what this movie does better than anything is reinforce that fact. It really leans into the absolute shear terror and danger these astronauts put themselves in every time they even trained to go into space. From minute one we see Neil Armstrong (Ryan Gosling) risking life and limb going into low-level orbit in some sort of supersonic rocket-propelled plane that looks to be made of sheet metal and bolted together by some interns at Grumman. Mind you, this is the mid 1950s and that thing is all manual gauges and devoid of even the hint of a computer. It’s mind-blowing that these dudes put themselves in what seems like a 50/50 death gamble on a weekly basis. It’s all chalkboards and practical testing with very non-tech tech.

And because this is not just a historical piece, but a biopic, we have to focus on the effect Armstrong’s actions have on his friends and family. First, the dead daughter. Which, I will admit, is sad as hell. Dead of a brain tumor at two and half and unable to save her, Armstrong buries his grief and focuses it on his career. A career that seemingly comes with a death wish. As is evidenced by several of his co-workers and friends dying in test plane crashes and failed launch attempts. I imagine a lot of it is fictionalized, but his singular focus on his job — his dangerous-ass job — and how his wife and surviving children live in a constant state of fear of him dying while he becomes sullen and more driven make it to the moon is compelling and relatable. Relatable in the fact that while you, as that person’s spouse, would be proud, but would also wonder why one of the bachelors (or somebody else’s husband) couldn’t be the guinea pig in these incredibly untested endeavors.

The funniest part is what an asshole they make Buzz Aldrin (Corey Stoll) out to be. I live in a town that has a middle school named after Buzz. He is a bit of a local hero. And is still my hero for punching this moon-landing conspiracy theorist in the face at age 72. I could watch that clip all day, every day. Anyhow, they set up what is apparently a kinda fakey adversarial relationship between the somewhat stoic Armstrong and the more brash, unsentimental Aldrin. The scientist versus the cowboy. Which, of course, culminates in the ultimate Apollo 11 flight to the moon with the two of them aboard (along with poor Michael Collins, who had to sit there orbiting while they got all the glory). Will they get along after climbing into what had to be the most claustrophobic thing ever invented by man? Will they survive in that tin can shot into space with what feels like very little idea it’ll work? Well, we know the answer to that, but director Damien Chazelle does a decent job making us worry anyway.

So, has this well-made and well-acted film changed my mind about biopics? No, not really. Because very few biopics have all that this one does. This monumental achievement, along with personal drama, along with historical significance. This ain’t the story of some random Welsh WWII codebreaker or English Channel swimmer who they have to invent drama for. This is dramatic in and of itself. And makes me wonder where people like this get the bravery that they do when I’m even nervous at my age to get back on a skateboard should I fall and maybe break a wrist.