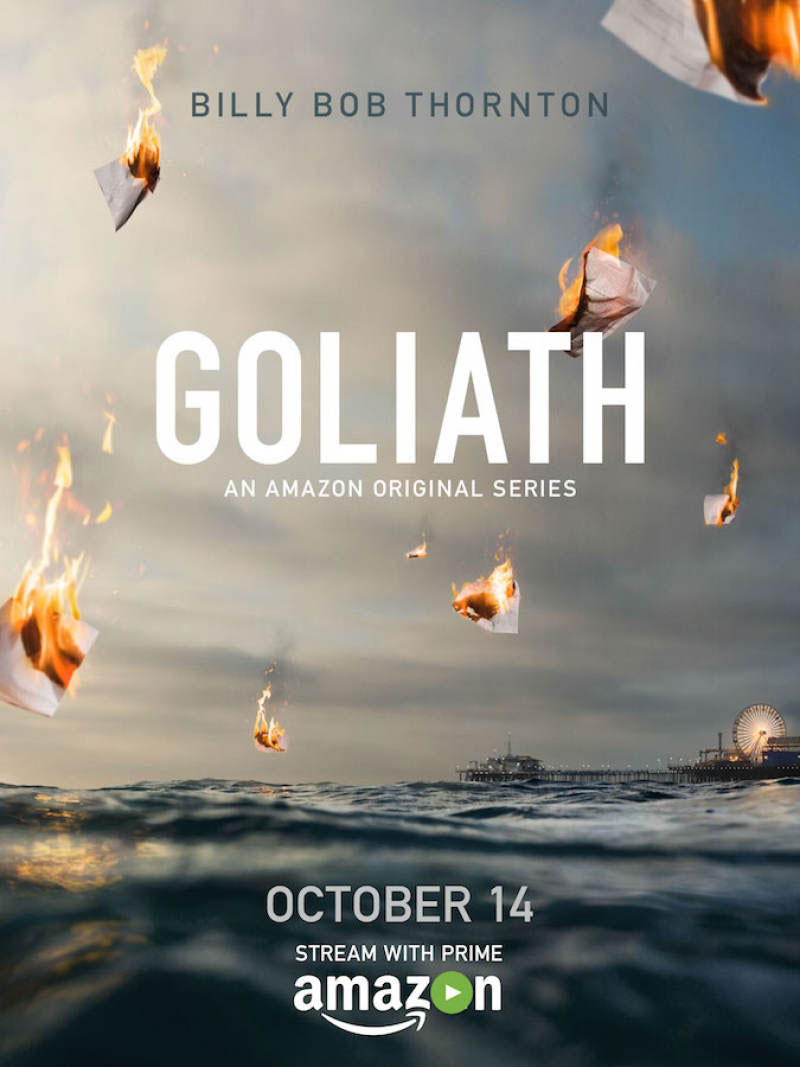 I believe Goliath is supposed to be part of this “prestige television” movement we’ve seen across all of basic and pay cable and your various streaming platforms over the past few years. Thing is, just because you hire decent actors, darken the plot a little and add some cussing and some boobs, it doesn’t make something “prestige.” In some cases — like this one — all the big-name actors and all the darkness in the world can’t save the series from warmed-over tropes galore and an absolutely shrug-worthy plot that made me feel embarrassed for the actors at least once an episode.

So, tell me if this plot sounds familiar. You can substitute “cop” for “lawyer” or Mad Lib in any formerly great whatever in there, but here we have Billy McBride (Thornton), a once awesome trial lawyer who started a powerful firm with his partner, Donald Cooperman (Hurt), and proceeded to win all the important cases until — GASP! — that one case he “lost by winning” that “changed everything.” Afterwards, this awesome lawyer spiraled, jettisoning his family and his career, turning into a drunk who lives out of a motel in Venice Beach and takes on low-rent cases getting hookers and low-level drug dealers out on plea deals. He drives a beat-up, old Mustang and feeds the neighborhood stray dog — which, of course, lets you know that he’s a softy under that drunken, gruff exterior. He’s the male equivalent of a hooker with a heart. His life is going along its normal course, his angry teenage daughter both loving and hating him (in a very Californication kind of way) and his ex-wife clearly not entirely free of his charms (again in a very Californication-like manner), when he gets the chance to get back in the game — against his old partner / old firm! This part has some echoes of Better Call Saul, oddly enough. Anyhow, his now ex-partner is this weird villainous guy with a half-burned face who sits in his dark office 24-7 and is more urban legend amongst the associates than actual man. He communicates using a clicker and mumbles in that way only William Hurt can. His character is preposterous and honestly one of the worst and most clichéd I’ve seen in years. Their rivalry is set up in a dumb way where we know Billy has something to do with the burns, and maybe I missed exactly how it happened, but the reason for Cooper’s hatred toward his old partner is muddled at best. Something about everyone liking Billy better than him. Boo-hoo.

On top of the character outlines drawn from the CBS discard drawer, we add in the typical, hit-you-over-the-head religious overtones as we see Billy walk into the ocean in order to baptize himself to wash away his sins, a couple scenes where he lays in a very Christ-on-the-cross-like pose and his redemptive relationship with a prostitute and probably some other stuff that I didn’t catch with my limited knowledge of Jesus stuff, but I’m sure it was clunky whatever it was. The plot steers awkwardly into the court case that Billy takes on, going against the big, bad military contractor and his ginormous ex-firm. Yes, this is why the show is called “Goliath.” Because, of course, he’s David. Thing is, the show producers do very little to make the odds seem that stacked against him. They do a few things, but there is very little sense that he’s fighting against a literal army on the other side. Maybe it was Amazon cutting corners budget-wise, or perhaps they just didn’t think to make it seem insurmountable, but most of the scenes seemed remarkably empty and underwhelming. Speaking of, the courtroom scenes come off as super-amateurish and written like a tossed-off ABC procedural, especially after seeing well-written courtroom scenes like those in The Night Of. Like almost to the point of being so simple they don’t make sense. Beyond the courtroom set-ups, the dialogue (when Hurt isn’t clicking his stupid, fucking clicker) is almost as inane. Billy and his team literally say some variance of “we’re fucked” or “we’re so fucked” in every scene. You know, just so you know they’re fucked. It also seems that all the women in positions of power managed to get there by sleeping their way to the top. An odd, old-school message if there ever was one. Unless it’s so intentionally egregious that it’s supposed to be some commentary on society that I’m missing. In any case, it puts it out there and I felt icky taking it in.

Even with all this, I did manage to get through all eight episodes, and only fixated on Thornton’s wig about 1,200 times. It’s weird that it’s somehow not okay for an adult male of a certain age to be bald, right? I mean, look around at the 61-year-old dudes you know… He’s allowed to be bald. But, no, this alcoholic, who inexplicably also has sleep apnea added to his already oddball list of characteristics, has to wear a distracting piece that makes his unbelievable persona even less believable. He also likes to watch Hoosiers over and over again, because they apparently needed one more quirk to add to his treasure trove of stupid quirks. So, if you couldn’t tell, I was not in love with this one. It just felt all wrong in my orbitals — and my heart. Sorry, series creator, David E. Kelley, you’ll just have to be satisfied being married to Michelle Pfeiffer, which certainly ain’t a bad second prize.