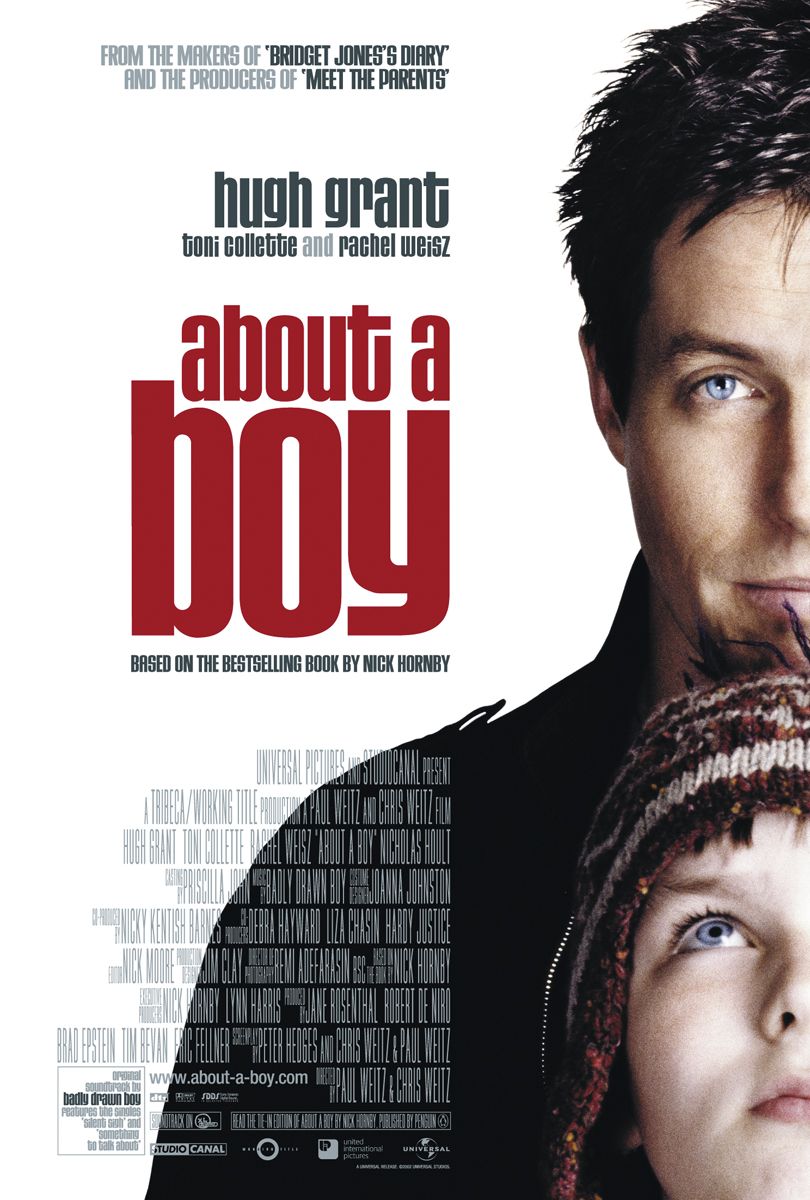 I always find book adaptations fascinating. There are some books out there that feel as if the authors actually wrote with actors in mind, counting the option money for the screenplay before even finishing the manuscript. The worst example I can recall of this Hollywood whoring is John Grisham’s The Pelican Brief. In the novel Grisham essentially sounds like he is describing a photo of Julia Roberts from some US magazine cover. And guess who ended up playing the roll? You guessed it: Ms. Roberts.

While reading About a Boy, I couldn’t help but think of Hugh Grant. Sure, the guy in the text doesn’t look exactly like him, but the guy is a charismatic cad–a British fop who we don’t hate, despite his perpetual laziness, stunning materialism and stone cold emotional disposition. And who is the best guy out there at playing the lovable, charismatic British thirty-something guy with the cool demeanor and absence of malice? Why, it’s the man who got caught with a hooker on Sunset Blvd. and somehow became more lovable because of it! I’m sure our author friend, Nick Hornby, had him more than in the back of his mind when writing this part–it’s pretty much tailor-made for him.

Anyhow, I liked the book, but didn’t love it. The whole thing was just a little too “sweet.” The characters were just a little too stereotypical and predictable. Unfortunately, the movie falls into some of the same traps as the book, making situations somewhat obvious, and the outcome–and path of its evolution–too direct.

Grant plays a ne’er-do-well slacker who has never had a real job or any kind of responsibility of any kind. His father wrote some fictional Christmas song that generates enough cash, through royalties, to keep him in designer jeans and fancy espresso makers. All his friends–the few he seems to have–are having children and thinking about their futures. He can’t think beyond his morning cup of coffee. Enter the troubled child, with a mother who is even more screwed-up than he is. As expected, Grant sees himself in this kid. They become friends, and he realizes that maybe he wants to change. Along the way there are relapses and doubts… Starting to sound familiar? Yeah, it’s not necessarily an original plot, but what makes it nice are the actors and the dry, British sense of humor that is interjected into the script along the way.

If this was an American film, with American actors (Haley Joel Osment, anyone?), this thing would have fallen flat on its face. There’s a reason Grant is always cast to play the cad–he’s good at it. No matter how big a jerk the guy is, you still end up rooting for him. The kid in the movie is supposed to be fatter than he is (according to the book), but the actor manages to pull off the geeky awkwardness very well. Toni Collette is disturbing to look at. I guess that was the idea, but she was seriously grossing me out. On the opposite side of the scale is Rachael Weisz. Man, she is not hard to look at at all. All this aside, I suggest renting this one with a lady friend, turning it on and watch it work its magic. [DVD]