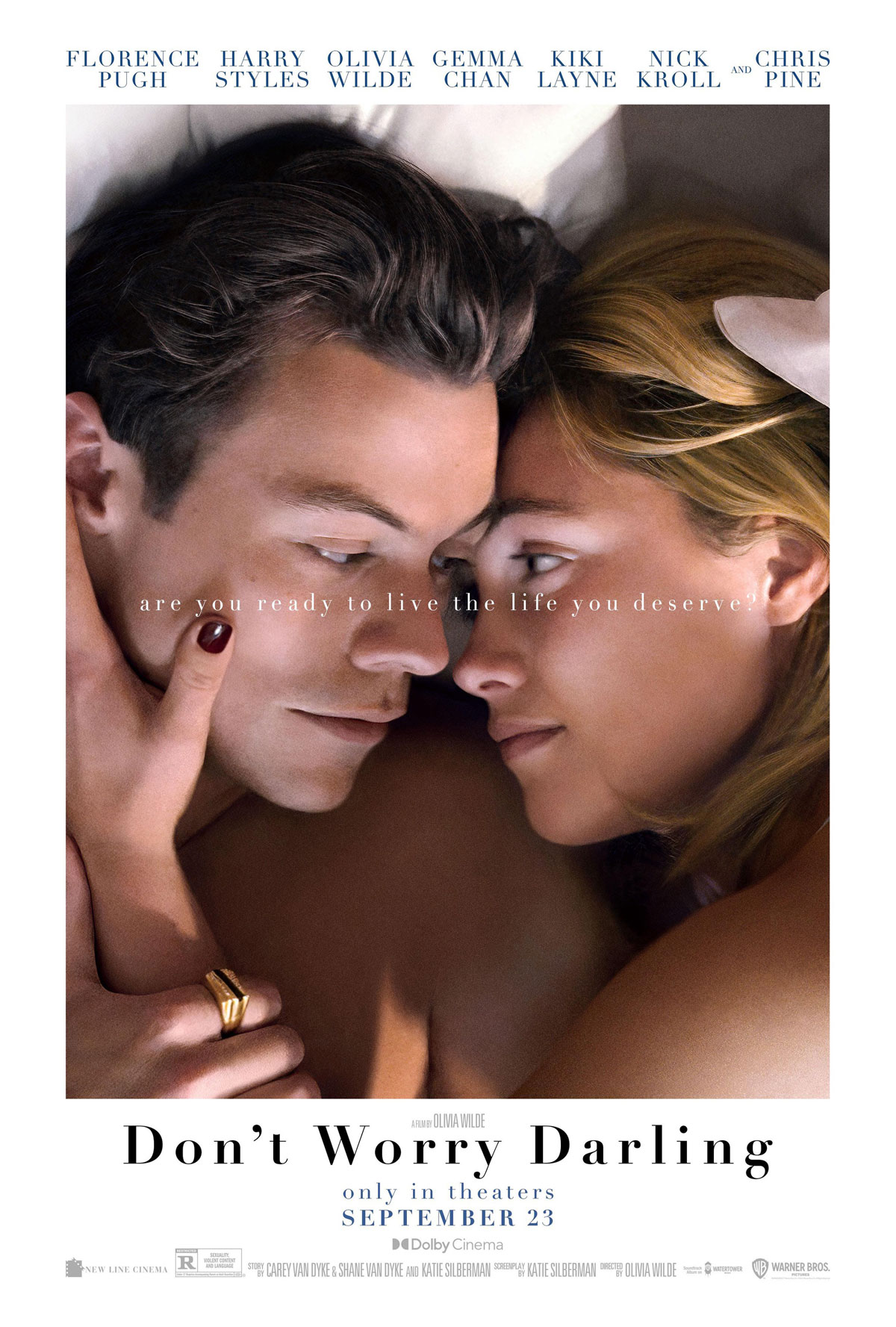 I understand there was a lot of weird crap surrounding Don’t Worry Darling. It seems any time Shia Labeouf is involved in anything, it gets weird. But all the mishigas around him and his involvement (or non-involvement) and the relationship between director Olivia Wilde and Shia’s replacement, Harry Styles, overshadowed the movie itself. And then there was the whole “spitting” incident/non-incident between Styles and another of the movie’s stars, Chris Pine. Weird, wacky stuff.

Putting aside all the drama, the reviews, when they came out, were not… kind. I mean they weren’t like incredibly horrible, but I think there were a lot of people cheering for Olivia Wilde and her female-led vision prior to the film’s debut. Especially on the heels of the incredibly charming, Booksmart. She said all the right things, seemingly took on the right projects and had good will going into this thing. But then there was the divorce weirdness with Jason Sudeikis, the on-set relationship with Styles and the outting of her semi-shady dealings with the whole Florence Pugh / Labeouf turmoil. Which apparently broke people’s brains and somehow soured some folks on her and overshadowed what turned out to be a semi-interesting endeavor. Or at least distracted from it in the way perceived scandal or pettiness always does.

Wilde is a millennial. The scriptwriter of this film, Katie Silberman, is very much a millennial. It makes me wonder how many episodes of Alfred Hitchcock Presents they ever saw. Both the original 1950s series and the 1980s reboot. Personally, I was obsessed. In fact, I took a whole Hitchcock class in college because of my love of his mix of mystery, creepiness, social commentary and twisty narratives. Not to mention the ironic humor — dry and otherwise — that he injected into his stuff. But let’s imagine that both the writer and director of this very clearly inspired by Hitchcock and Twilight Zone narrative might be peripherally aware of these things. Or Black Mirror, at the very least. I’m not really sure what my point is other than to say that in some ways this whole movie feels more like an episode of an anthology than it does a feature. There is one reveal. One twist that is exposed that would normally be the creepy ending of a one-hour episode and that would be that. The camera would pan away and we would be left with a “Man, that was a pretty quality piece of television making.”

But, no, we have to watch Harry Styles pretend to be an actor for 120 minutes. A fact that probably wouldn’t be as obvious if he wasn’t paired with an incredibly talented actress in Florence Pugh. He’s not horrendous, mind you, just not a natural quite yet. But I suppose he fits the look of the perfect dude in the perfect marriage in the perfect community in some unknown time and place in America (despite being a Brit). And that’s where we first land, in this 1950s-looking town with the cul-de-sacs, manicured lawns and pastels in the foothill basin of a faceless Palm Springs-y desert. It definitely feels like a Tim Burton homage, as the men all leave simultaneously in the morning in their various 50s gas guzzlers, their wives out front waving. But we know from minute one that this isn’t the real world somehow. Or an alternative one, at the very least. The wives all stay at home all day listening to what sound like life lessons or affirmations from a mysterious recorded voice, which turns out to be a very cultish Chris Pine. The community seems to exist outside of the rest of the world. No outside comms. No broadcast television. It’s a company town where all the families have chosen to live in as part of developing some large project for Pine’s character. Though we’re never told what that project is, or why all these seemingly dufus-y dudes with no discernible skills are so crucial to whatever is going on.

Pugh is our POV character here. So when the paranoia that something weird is up starts to dawn on her, we’re brought in through her thoughts and actions. And I’m sure there is some stuff in here about being locked into domestic whatever that I don’t get, but the thing that’s missing for me in the film is the build-up of dread. The fear and anxiety that is present in her just doesn’t feel earned. Not because of here acting, mind you, but because of the script. And this is something that some of the other shows I mentioned do well. Here, it’s just too subtle. Or nonsensical. Especially when we learn later on what is actually happening, it makes even less sense that, for instance, a plane crashes out in the desert. An inciting event that leads Pugh’s character (ridiculously named Alice) to walk out into the desert and come upon a mirrored building that she isn’t supposed to see. Which, again, makes absolutely no sense when we understand the actual situation later on. There shouldn’t be a crashing plane. There shouldn’t be this off-limits building. It’s pretty dumb. Oh, did I mention that Alice’s best friend’s name is Bunny? C’mon, man.

Ignoring my narrative and logic issues, the movie isn’t all bad. In fact, there are scenes and visuals which make it worthwhile. It’s a decent swing at something. You can kind of see it in the filmmaker’s head. I just think they got out in front of themselves a little and didn’t quite land the plane. Mixed metaphors aside, I’ve spent way worse two hours in my life. It has elements of Eternal Sunshine (which may be intentional) and most obviously nods to The Stepford Wives, but attempted to bolt on some 2022 elements. Elements that, frankly, I could have done without. I wanted the analog version of the twist. There was a point where I said to myself, “Self, I hope this isn’t what’s going on.” And, yes, that’s exactly what it was. It could have been 5,000 other things. But, alas, they went with the most popular and obvious version. A shame, really, as there was a seed of a good film here. In fact, there was a bush. Not a tree, mind you, but like a shrub. And sometimes that’s just fine.