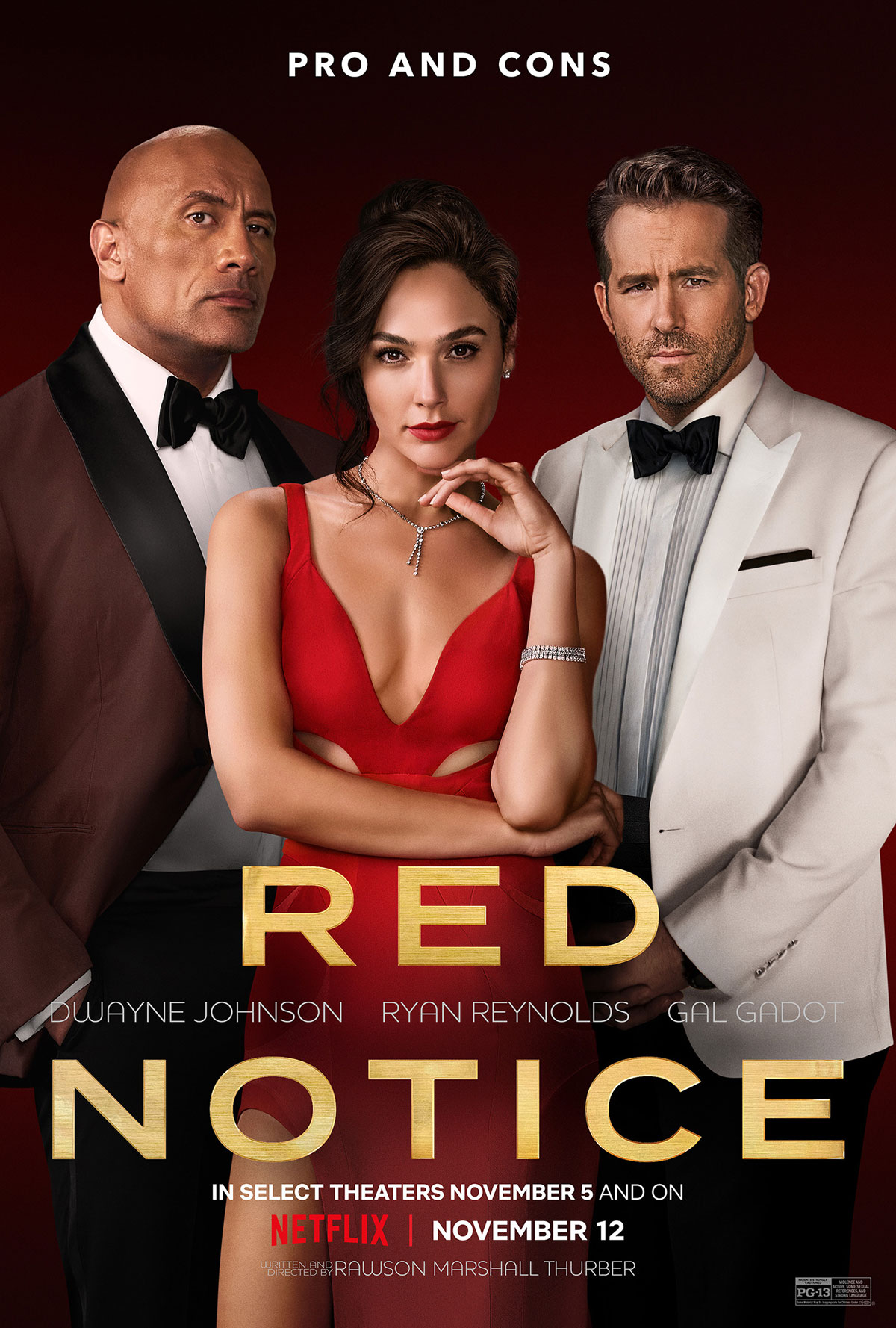 Yuck? Well, not yuck per se. But, like shrug? Yes, Red Notice, gets a by-the-numbers action comedy shrug. Interchangeable parts and indistinguishable plot points make it the Mad Libs kind of formulaic movie that killed off these types of movies to begin with. Frankly, this could be Red Notice 4: Green Notice and we would have no idea. Because even as an original script, it feels like a retread. Or the third sequel in an uninspired series. Obviously they took the generic script, threw three of the most popular actors in the surrounding genres on the poster and just pulled the ripcord. They could stick these three in a shot-for-shot remake of Baby Geniuses and it would be a hit.

The thing is, this is really not a very good movie. Yet… apparently there are already going to be two sequels. Because there is no god. But Hollywood loves a good pair-up, and they realize that a Rock / Ryan Reynolds team-up is gold. Even if the product is straight trash. I know I’m just repeating myself here, but it’s where my head goes when thinking about this thing. Because, frankly, I barely remember the movie itself. The same way I don’t really recall what happened in National Treasure, which this thing definitely bites from. Along with Raiders, because why not? And then every double-cross, heist movie ever. Let’s call it Ocean’s Eleven. But with like nine less dudes. I think just mentioning these three films gives you the idea of exactly what you’re going to get with Red Notice. Some goofy lore, some Nazis and some witty-ish banter and double-cross twists. I suppose if you’re going to borrow from a bunch of films, why not borrow from popular ones?

The problem is you have to have compelling and unique connective tissue when stringing together all of your familiar, popular beats. The creators of this thing clearly thought they didn’t really have to try that hard because they had three compelling actors who could just fill the void with wise-cracks and… sexiness? And then do the thing that action comedies do, which is lots of goofy racing around where things fall and people mug and main characters punch each other and then punch bad guys and save each other unexpectedly. All while quipping. You know the deal. But all this fills in the gaps between exposition poorly disguised as jokes. I won’t get into the whole Nazi thing, but suffice it to say that treading on that territory is always a little cringey. Especially in a “comedy.” And especially because Raiders already did almost the exact same thing many years ago with the ark instead of these Cleopatra bejeweled eggs. Nah, man, this is McDowell’s!

Look, this movie is fine. It wasn’t god-awful or offensive for the most part. It does star three good-looking, charismatic people who look great on screen. But to spend $200 million to make a rote action comedy for a streaming service seems both ludicrous and verging on cynical. Like if we load it up with these actors who people will tune in for no matter what bullshit we throw at them, it’ll make us money. Picturing the Netflix ghouls doing that hand-wringing thing that evil geniuses always do. I choose to believe that they wanted and intended to give people a quality product and weren’t just playing on the public being suckers for flashy promos and star-power. But, honestly, sometimes it’s hard to tell.