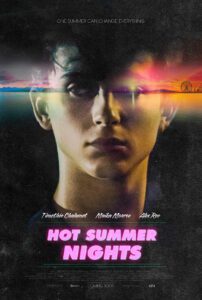 I mean how do I not watch a coming-of-age crime drama set in 1991? And starring this Timothy (sorry, it’s spelled Timothée?!) Chalamet kid I’ve been hearing so much about? Well, as it turns out I don’t not watch it. Now, you may ask, why all the double negatives and abuse of grammatical rules? Well, I’m trying to give you a sense of what it was like to watch Hot Summer Nights, a movie that, when looking directly at it seems to make sense, but if you take even a cursory critical look at what you’re watching becomes a tangled mess of a film filled with ridiculousness.

So we have Timmy Chalet (yes, I know) who plays this “city” kid named Daniel. I’m honestly not sure what city he comes from, but let’s just say it’s like Providence, RI or something. He’s a sulky, pale kid who lives with his mom. A mom who is worried that he’ll waste his summer sitting around moping after his dad has died. So she sends him to Cape Cod to live with his aunt. Daniel and his aunt seem to know each other pretty well, but somehow he’s never been to Cape Cod? It’s unclear. Anyway, we have that stereotypical setup that is literally the plot of almost every 80s summer movie where he comes into this town that is one-half townies and one half rich summer goers. See also Ozark. It seems the rich people love smoking weed, and the townies love to sell it to them. Daniel doesn’t seem to show any interest in anything until he — for reasons completely unclear to us — decides he wants to hook up with the local townie hunk and weed dealer, Hunter. Hunter can be the pot hook-up beauty and Daniel can be the brains. Never mind the fact Daniel has never dealt drugs, doesn’t seem particularly bright and we’re given no clue that he has an inclination for anything other than sitting around moping and playing video games. But what would a movie be if a shy wallflower didn’t become a swaggering drug-dealing mastermind after a one-week crash course from this local dealer of dime bags?

And where would we be if there wasn’t a femme fatale of sorts to distract said mastermind from his work? And, of course, she comes with complications, this McKayla. Because — and I suppose this is a spoiler, so ignore it if you care — she turns out to be the estranged sister of Daniel’s drug dealing partner, Hunter. Now, what are the odds? Especially considering everyone in town knows both of them very well considering they’re both the object of every man, woman and child’s sexual desire? It’s a little bit of a Three’s Company thing. And then Daniel goes ahead and lies to both of them, telling each that he’s not involved with the other. Some mastermind, huh? In a town that’s like two miles square he doesn’t think either someone will see them together and tell the other, or they won’t run into each other? Needless to say that brother and sister somehow haven’t run into each other in years despite being in the same tiny town? The whole situation is about as believable as Martin Landau’s wig (R.I.P).

Oh, did I also mention that the girl Hunter (who, again, is a well-known drug dealer and punk) chooses to date is the daughter of the police chief, who also happens to have been his father’s best friend? Or something. It’s just straight dumb. And once the two of them expand their drug empire with the help of some regional weed importers, Daniel goes out and buys a Corvette? A kid, who, by the way, doesn’t even live in town, has now upgraded from a shitbox to a flashy sports car. Nice way to keep it on the low-low, dummy. And somehow all of this isn’t even the least likely stuff in the movie.

Director, Elijah Bynum, who doesn’t look to have directed anything else in his life, has clearly watched Goodfellas a million times, along with pretty much every indie director of all time. There are a bunch of stylized scenes that look relatively cool, but are fishily similar to scenes you’ve seen in other films. And none of them are consistent. I mean, if you’re borrowing from Todd Phillips one minute (there is a scene that is almost an exact rip from The Hangover), Scorsese the next and the Coen Brothers after that, it doesn’t exactly make for an original experience. And then there’s a weird drug dealer scene that just has to be an homage to Boogie Nights, or else Paul Thomas Anderson should sue for stupid obviousness. In other words, the movie feels like a strung together gathering of scenes mimicking his influences and copping plot points from other films without connecting them in any coherent way.

Now, is this a movie you could have on in the background without being horrified? I mean, sure, if you want to be even more stupefied by the half-assed approach to the plot. Or confused why there seems to be a young child child narrating the movie in voiceover. Like The Legend of Billie Jean. Not that I remember if there’s voice over in that movie, but it feels like there should be. Of course some of the nonsensical stuff that happens in the plot could be explained away by the fact that this story is being told to us in a kind of passed-down, legend kind of way by this child. A child, who we later find out really has no connection to anything. Which just confuses things more and possibly negates everything we’ve just been shown. Which I suppose is sort of the point. But, not really, because all sorts of things happen that nobody but the principal character would know about and wouldn’t make sense for a passed-down tale to include. Throwing the whole thing into more chaos than we could have possibly imagined. Which makes me believe that the whole v.o. idea was added in later when the studio realized nothing made any damn sense. And don’t get me started on the waxing and waning attempts at Massachusetts accents…